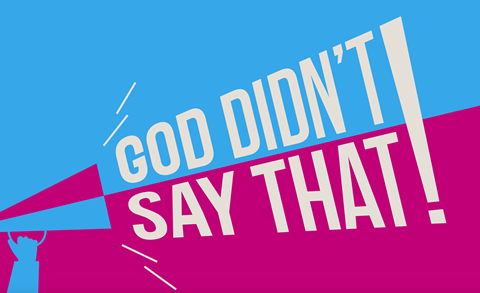 I believe that God speaks today. His ability to communicate with his people is not in doubt.

Unfortunately, there are many instances of the prophetic gift being misused. We saw this in the run-up to the 2020 US presidential election, when many ‘prophets’ were confidently predicting that Donald Trump would win a second term. They got it completely wrong.

I believe these prophets must apologise, and I said so in my most recent book, Prophetic Integrity (HarperCollins). When a word has been introduced publicly with the preface: “The Lord told me…”, and it does not come to pass, it dishonours the name of the Lord and brings discredit upon the gift of prophecy.

When Samuel made it obvious before the sons of Jesse that he was ready to anoint Eliab as the next king of Israel, he was rebuked by the Lord (1 Samuel 16:6-13). When Nathan got it wrong before King David, he admitted it the following day (2 Samuel 7). These modern-day prophets should have the same humility.

Genuine prophecy is a direct word from God, unfiltered by human embellishment, whether it pertains to the past, present or future. But not all prophecy is of the same calibre; there are levels of prophecy, as in a pyramid, starting from the bottom:

General exhortation (or encouragement) as to a congregation. This was the kind of prophecy Paul encouraged in 1 Corinthians 14:1; he was not motivating someone to become another Elijah. Someone may have a ‘word’ – perhaps from a dream or even a vision. We are not to despise such prophesying (1 Thessalonians 5:20), but such a word needs to be tested.

Prophetic preaching. Peter said that if anyone speaks they should do so as if their words were the “very words of God” (1 Peter 4:11). This is what I wish would be true of my own preaching! But even if one is conscious of the Lord’s enabling, one should be humble about it and not say: “Thus says the Lord…”

When forced to testify during persecution. Jesus said: “When they arrest you, do not worry about what to say or how to say it. At that time you will be given what to say, for it will not be you speaking, but the Spirit of your Father speaking through you” (Matthew 10:19-20).

Non-canonical prophecy. Nathan, Gad, Elijah and Elisha are examples of non-canonical prophets; those who did not get a book named after them like Isaiah or Jeremiah. Could there be more prophets of this magnitude and stature today? I believe so.

Can they say: “The Lord told me”? No. They should be the wariest of all in saying things like that. Why? Because, in doing so, they neglect Jesus’ teaching, as I will explain below. Not only that; they will be watched and examined with the most painful scrutiny.

If they simply say: “I feel I must say this to you…” (or similar), they will maintain their integrity, credibility and anointing. Many a modern prophet could have been saved incalculable embarrassment had they been more modest in their claims.

Holy Scripture. This is the top of the pyramid and includes all of the Old and New Testaments – including the canonical prophets. Scripture is God’s final revelation. If any man or woman claims to speak on the same level as it, they are utterly out of order and will be found out sooner or later.

Paul said in 1 Corinthians 13:9 that “we know in part and we prophesy in part”. This means nobody knows everything and no prophet has unlimited knowledge.

Each of us has but a “measure of faith” (Romans 12:3, ESV). This means there is a limit to our faith. Only Jesus had a perfect faith because he alone had the Holy Spirit “without limit” (John 3:34). For those who prophesy, it must be done in “proportion” to their faith (Romans 12:6, ESV). In other words, we must not go beyond our anointing.

There are also seasons of the prophetic. The word of the Lord was “rare” at one time in ancient Israel (1 Samuel 3:1). Amos even spoke of a coming “famine of hearing the words of the Lord” (Amos 8:11). This means that sometimes God chooses to say nothing. God may choose not to speak for a generation. If so, how foolish it would be to pretend to speak for him! 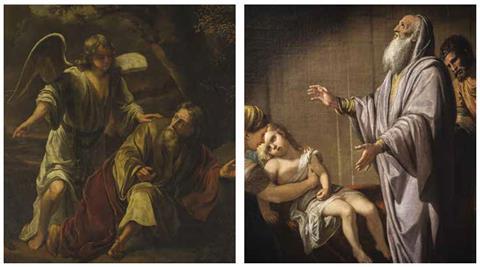 Elijah and Elisha are examples of non-canonical prophets; those who did not get a book named after them like Isaiah or Jeremiah

A common mistake of many genuinely prophetic people is that they may indeed have some form of spiritual experience; they may receive a true word from God but then embellish it with personal exhortation or theological teaching based on their own experience – which may or may not be from God.

There are certain principles we must follow if we are to maintain integrity in the prophetic. Firstly, don’t go beyond what is given. Do not embellish the message.

Secondly, be very careful to honour the name of the Lord. We must obey the third commandment: “Do not misuse the name of the Lord your God” (Exodus 20:7, NIRV). Jesus taught that swearing an oath can be misusing or abusing God’s name; he told us therefore not to swear at all (Matthew 5:33-37). James quoted his teaching on this subject and it’s helpful for us to remember it: “Above all, my brothers, do not swear – not by heaven or by earth or by anything else. Let your ‘Yes’ be yes, and your ‘No’, no, or you will be condemned” (James 5:12, NIV, 1984).

Any prophecy should make God look good, not the prophet

In this passage James was addressing the workers who were mistreated by wealthy believers (James 5:1-6). The temptation for poor labourers in the fields was to say: “God told us he is on our side and against you”, but James warns against using God’s name in this way. To use God’s name to make ourselves look good is the worst form of name-dropping. Any prophecy should make God look good, not the prophet.

One of the greatest privileges a Christian can receive is for God to swear an oath to them, as he did with Abraham (Hebrews 6:13-15). This is what often lays behind prophetic accuracy and the miraculous in the Bible. If the oath from God is granted to us, it may pertain to assurance of salvation (Hebrews 4:10; 10:22), advanced notice of answered prayer (Mark 11:24; 1 John 5:15), confirmation of correct theology (Colossians 2:2), “the prayer of faith” for healing (James 5:15, ESV) or a prophetic word.

It is only when God swears an oath to you that you can have the authority that Elijah had. Elijah, having received the oath, did not bite his nails every time he saw a cloud in the sky. He calmly said to the king: “It won’t rain unless I say so.” How could he be so sure? “As the Lord, the God of Israel, lives, whom I serve, there will be neither dew nor rain in the next few years except at my word” (1 Kings 17:1). That is oath language; God himself swore an oath to Elijah and told him what would happen.

If you or I say: “Thus says the Lord…” we must know that God has sworn an oath to us.

What if the Lord really did give you a word? Good, I am thrilled for you. But do you need to tell this to me? What would be your motive? Is it to make him look good, or make you look good?

My suggestion would be to keep God’s name out of it – unless you would be prepared to be martyred for what you are claiming. You can always say instead: “I feel I should share this word with you…” If the word is truly from God, it will be recognised in due course. There is no need to rush it! Remember, James said: “Above all” do not misuse the Lord’s name or “you will be condemned” (James 5:12). Misusing his name isn’t worth it.