Thomas Johnson: How a slave became the first Black student at Spurgeon’s College

Thomas Johnson was born into slavery but became one of the first Black men to study at Spurgeon’s College. This is the amazing true story of a man who dared to dream of preaching God’s word 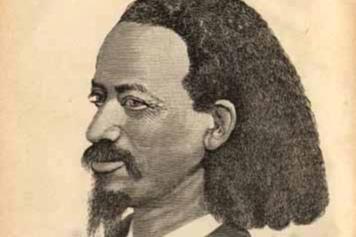 Thomas Johnson was born in August 1836 in Rock-Rayman, Virginia, to a slave mother and free father who was one-eighth black. His mother’s owner refused to sell the pair to Thomas’ father, so when Thomas was just three years old, he was sold to a slave owner in Alexandria, Virginia. He wouldn’t see his mother for another six years.

As he grew, Johnson became increasingly interested in the message of the gospel, writing in his book Twenty-Eight Years a Slave: “I used to think how nice it must be in heaven, ‘no slaves, all free,’ and God would think as much of the black people as he did of the white.” He eventually came to faith in Jesus Christ in June 1857. In his book, he describes the spiritual transformation that took place and the joy he felt when, following the end of the American civil war, he was eventually emancipated, calling it a “third birthday”.

He wrote, “Born August 7th, 1836 - a ‘Thing.’ Born again (John iii. 7), June, 1857 - a Child of God. Born into human liberty, April 3rd, 1865 - a Free Man. No longer was I a mere chattel, but a man, free in body, free in soul; praise the Lord. It is impossible to give an adequate idea of the abounding joy of the people - the great multitude of liberated slaves - after the long years of toil and suffering. Strong men and women were weeping and praising God at the same time.”

A burning in the soul

Johnson had heard about Charles H. Spurgeon, the well-known Baptist minister who was a fierce critic of slavery. As an enslaved man, he never expected to hear him preach, but he thought about it often, and a deep desire to also serve God as a missionary and preacher grew within him. Johnson was eventually ordained and led a small African-American congregation in Chicago. But his heart was always for Africa.

In 1876, Johnson and his wife travelled to England to prepare for their mission. There, his friend Mr Hind Smith wrote to Mr Spurgeon inquiring if Thomas could be admitted to his college as a student. The reply was very simple: “Dear Mr. Hind Smith,—Yes, let the dear man come—C. H. Spurgeon.”

No longer was I a mere chattel, but a man, free in body, free in soul; praise the Lord

“Thus the way was opened up for me to enter the Pastor’s College,” he wrote. “I cannot describe the gratitude I felt towards my blessed Jesus for the privilege of coming to England, and for the kind friends.”

Study at the college was demanding. But it was not very long before the opportunity arose to meet Spurgeon himself. Ever interested in the lives and ministries of his students, Spurgeon listened carefully to Johnson as he spoke of his life, his journey to England and of his desire to travel to Africa as a missionary. After listening to his still-nervous student, Spurgeon assured him that he could depend upon him to “do his part”.

On the 6 November 1878, the newly graduated Rev Thomas Johnson sailed from Liverpool to the west coast of Africa to begin his ministry as an evangelist, pastor and teacher of the gospel. Sadly, his wife died there and, eventually, poor health forced him to return to America in 1880. To facilitate his return and ministry in the United States, Spurgeon wrote a letter of commendation describing how Thomas had passed through the college with honour and how he should be received as a beloved brother in the Lord. Johnson was no longer just a student of Spurgeon’s but also a friend.

Johnson was deeply affected by Spurgeon’s advice “that if I wanted to reap in the pulpit I must plough in the closet.”

In the 1890s, Johnson moved back to England and settled in Bournemouth with his second wife, Sarah. Until his death in 1921, he continued to be an active minister of the gospel throughout England.

In Hebrews 12:1-2 it states that, as Christians, “we are surrounded by such a great cloud of witnesses” and that we should fix “our eyes on Jesus, the pioneer and perfecter of faith.” Rev Thomas Johnson, evangelist, missionary, pastor, teacher and author is an outstanding example of one of the great heroes of the Christian faith who kept his eyes fixed upon his saviour throughout his life, and who has bequeathed to the Church a truly inspiring testimony and example.