The Queen lived and died in Christian hope. We pray she will rise again in glory

In reflecting on the life of Queen Elizabeth II, the Archbishop of York Stephen Cottrell said it was Her Majesty's Christian faith which sustained her long reign. Here's his Sunday sermon in full 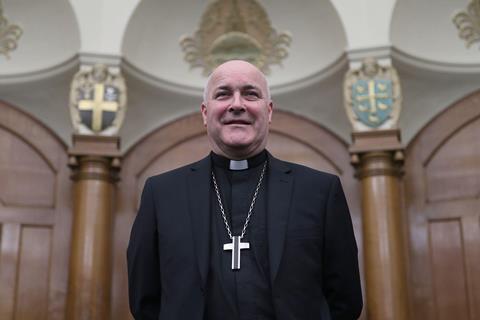 "The steadfast love of the Lord never ceases, his mercies never come to an end; they are new every morning; great is your faithfulness…  It is good that one should wait quietly for the salvation of the Lord." (Lamentations 3)

As we mourn the death of Her Late Majesty, Queen Elizabeth II, it is into such a period of quiet waiting that our nation now enters. Today her coffin will begin its journey towards the funeral in Westminster Abbey a week tomorrow.

And yesterday in the House of Lords, giving tribute to Her Majesty, I found myself saying, isn’t it strange that we are all telling our stories of when we met the Queen or even what we saw of her and in her – because most of us of course, never actually met her - it’s not as if she was a member of our family.

Because it comes to us that we are the household of a nation and that we do belong to each other. And part of our grieving is to tell our stories and share our thoughts when someone we have dearly loved dies.

And nor was this life for her in her early years expected. She was, of course, born into the wider Royal family, but it was not until the abdication of her uncle that she found herself thrust into position as next in line.

And that service she gave to this nation and the Commonwealth- the way she understood her role as a vocation to serve - continued right to the end, it now hardly seems possible that it was only last Tuesday, only five days ago, that she was receiving a new Prime Minister and we saw those lovely photos of her in Balmoral.

And where did this come from? This way of being a monarch that was more about service than rule?

At her Coronation, as I’ve already heard said several times, in perhaps one of the most poignant moments of the service, she steadfastly walked past the throne upon which she would sit and knelt at the altar, giving her allegiance to God before anyone else gave their allegiance to her.

Echoing those comforting words of scripture from the book of Lamentations, which is itself a book written out of the heart of the profoundest grief and tragedy, the Queen said this in one of her Christmas broadcasts –

"Each day is a new beginning… I know that the only way to live my life is to try to do what is right, to take the long view, to give of my best in all that the day brings, and to put my trust in God."

And let’s not forget that today is September the 11th, a day etched into the corporate memory of the world as we remember another day of horror and sadness when so many died.

And this is what we do. As we remember, as we grieve and mourn in our families, across our world, and in the household of our nation we tell our stories. And how do we make sense of the end of life and of death? How do we live our lives well in the time that is remaining to us? Well, we can do no better than follow the example of Her Late Majesty the Queen, who each day put her trust in God.  There’s nothing sensational or mystical about this. The Christian life is a life of simple discipline where each day we choose to live a certain way. Each day we choose to love our neighbour as ourselves. Each day we choose to love God. 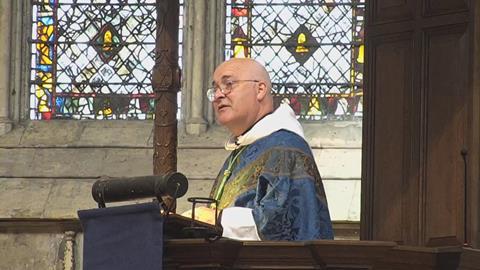 I can’t pretend I knew the Queen well, but I did, unlike most people, have the great pleasure and honour of meeting her on numerous occasions and indeed on one occasion staying with her. And what I saw in her was simple Christian discipleship. She said her prayers, she went to church. She knew that she needed that anchor in her life in order to live her life well.

We too must put our trust in God. We too must bend the knee to Him. Because the steadfast love of the Lord never ceases. His mercies never come to an end. They are new every morning.

The story that we receive in scripture is the story of God’s love for us, that God is on our side and that God cares for our world.

And from the midst of sorrow and tragedy, the writer of the book of Lamentations declares, amazingly, “Great is your faithfulness.” This seems utterly the wrong way round when so much has gone wrong, except that this person is seeing God and God’s faithfulness in the midst of the suffering.

And this, of course, is the broken, beating heart of the Christian story. God in Jesus Christ shares our life completely and absolutely, even our dying. And God raised Jesus Christ to glory.

It is this faith and this God that we turn to.  And as we know, it was this God and this faith that sustained Her Late Majesty the Queen.

Funeral services often begin with these words of Jesus from St John’s gospel: “I am the resurrection and the life; he who believes in me, though he die, yet shall he live, and whoever lives and believes in me shall never die.”

This is what we call Christian hope. The hope in which we live and die. And I suppose what I want to say to you, and to our nation in this time of mourning, which is also a time that binds us together, is that this Christian hope is for everyone.

In today’s Gospel, we have heard Jesus telling stories of a lost sheep and a lost coin. It is not self evident to us that this is the way we should live our lives.  Jesus begins by saying ‘which one of you wouldn’t, if you lost one sheep, leave the 99 and go in search of the one that’s lost?’ And the answer is none of us. Most of us in our lives would play the percentages game where one or two would be lost. But not for our God. Not for the God who is revealed in Jesus Christ. Everyone counts, everyone matters, everyone is included.

These stories, more than almost any other in the New Testament point us to the heart of God and God’s compassion for everyone., that when we speak about kingdoms we are speaking about the Kingdom of Heaven which is not for a select few, not only reserved for those who have been king or queen, but for every single one of us. And whatever our position each is received equally. No, more than that, the little and the least, the lost and the last are brought into the centre and given the place of greatest honour.

Her Majesty the Queen died on September the 8th, the date the Church remembers the blessed Virgin Mary, whose song was actually kings being taken down from their thrones and the lowly lifted high. Her Majesty the Queen knew this. She took her role as monarch very seriously indeed, but actually didn’t take herself too seriously.  There was always a good humour and a lightness of touch alongside astonishing and dedicated service.

On Friday evening in that very moving address to the nation, King Charles said of his beloved mother: hers was a life well-lived.

Surely, it must be God’s will that this is said of each of us. That we live our lives well. That our lives have meaning, and that meaning is measured by the love and care that we have for each other and for God.

God’s kingdom has no boundaries, because its borders run through human hearts. We might even say it is a kingdom without a king, for Jesus the servant, the crucified one reigns.

Such a life, following and emulating the servant king carries great responsibility, especially if you have received much. It is to such a life of servant leadership that we look and celebrate in this time of mourning and we remember that it is what our world so desperately needs. A world where we put others first. Where we learn kindness, compassion, justice and mercy.

I think the reason Her late Majesty the Queen took her role seriously, but not herself so seriously, was that she was well aware of the accident of these things, only happening because of the abdication of her uncle. But most of all, because of her faith in Jesus Christ. Because she knew, from the beginning to the end where her allegiance and accountability lie.

So, although it was not often seen in public, I can from my dealings with the Queen, confirm that she had a very good sense of humour. In fact, it is a sense of humour, particularly about oneself, that often saves many of us from being seduced and destroyed by the roles we take on.

Yesterday in the House of Lords I heard a particularly good example of this, and if you we will allow me and please if we may, let us try to finish this sermon with a smile.

Her Late Majesty the Queen loved horses, horse racing in particular, and dogs. This is well known. She was, however, no great lover of team sports, even though she saw a good many. After all, it was she who handed the Jules Rimet Trophy to Bobby Moore in 1966. After what I imagined must have been a particularly tedious cup final the Chairman of the FA, or some such sporty person, turned to her and asked whether she thought anyone had played well. She paused. Timing is everything with comedy. Yes, she replied, the Band of the Scots Guards.

Sisters and brothers, people of Yorkshire and of our nation, may Her Late Majesty the Queen rest in peace and rise in glory.

And may we rise up with the same faith in Jesus Christ and bring God’s peace and justice, God’s kindness and compassion to the world; may it comfort all who mourn and especially her family and our new King Charles, that in the midst of sorrow there may be joy, the joy of faith; the joy of a life well lived.

For great is God’s faithfulness. It is new every morning.

Most Rev Stephen CottrellMost Rev Stephen Cottrell, Archbishop of York, was born in Essex and found faith as a teenager. He was appointed the 98th Archbishop of York in 2020. He was a founding member of the Church of England’s College of Evangelists and also chairs the board of Church Army. He is the author of more than 20 books, enjoys poetry, music,art and walking pilgrimages. Stephen is married to Rebecca and they have three sons, one grandson and a dog.