The Netflix satire is all about freedom of speech, says Nathanael Smith 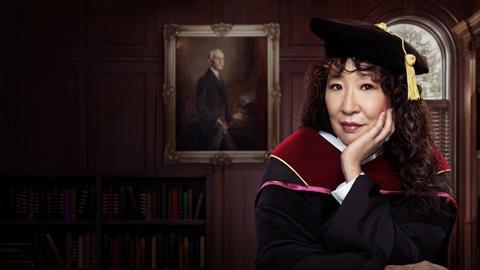 Few topics are as hotly debated in Christianity as freedom of speech, and nowhere is that battle more fiercely fought than in universities.

Ask a socially progressive Christian what the biggest problem in academia is and they’ll likely talk about systemic racism emboldened by an out-of-touch hierarchy. Ask a conservative Christian and they may fear the advancement of unchristian ideals championed by radicals who are quick to take offence and exceptionally slow to forgive.

The Chair, a new satire from Netflix that is both biting and humane, gets to the heart of the debate and concludes…that it’s all just a big mess.

This short series tells the story of Ji-Yoon Kim (played wonderfully by Killing Eve’s Sandra Oh), the first woman of colour to be chair of the literature department at Pembroke, a fictional “lesser Ivy” college in the US. It chronicles her struggles with an aging team unwilling to modernise, a Dean uninterested in diversity and a popular young professor who gets in trouble for being filmed doing a Nazi salute as a passing joke. What ensues is the anatomy of a scandal, as the fallout of the joke brings the difficulties of leading an ailing department into sharp relief.

Where this brief, brilliant drama succeeds - and what makes it essential viewing for any Christian with an interest in these issues - is in the generosity with which it depicts each party concerned with the controversy. It would have been easy, depending on your angle, to write the protesting students as petulant snowflakes or the offending professor as a racist dinosaur. The Chair eschews this approach, instead just allowing the narrative to unfold and let the viewer decide how they feel. It gives realistic, grounded portrayals of everyone, from aggrieved students to melancholic older teachers. The only person who comes off poorly is, strangely enough, the actor David Duchovny.

As The Chair is a satirical comedy, it does skewer the foibles and flaws of everyone involved, often to hilarious effect. But it does so with an empathetic viewpoint, never going for the easy gag or ridiculing the perspectives of anyone. Each view is given a fair airing, resulting in a morally murky, thoughtful conclusion that should give you a new perspective on whichever viewpoint was previously baffling to you. So while it does highlight the absurdity of such scandals, it is never cruel in its methods.

The show’s central approach is to try to understand and express what drives debates surrounding free speech, cancel culture and university life. This choice of empathy over anger is what makes The Chair important viewing for Christians. While it may be easy to fear the heated debates and the unforgiveness of the masses that we have come to know as “Cancel Culture”, it is more fruitful to understand them. Only by understanding can we begin to heal the divisions emerging in society.

The apostle Paul was a master at understanding the cultures to which he was called. To the Jews he became like a Jew, to the Gentiles he became a Gentile, he writes in 1 Corinthians. When in Athens, the academic and philosophical centre of the world at the time, he engaged with philosophers and quoted their poetry. He adapted, learned and respected the cultures he evangelised to, without ever compromising on his values. An effective evangelist should seek to do the same, understanding and operating within the culture of society around them.

The Chair is an invitation to understand, to speak the language of contemporary academia and to wrestle with its big issues. The conservative who is scared of cancel culture should gain a new understanding of the legitimate grievances of a generation, while the progressive should see that stubborn unforgiveness leads to hurting people and often misses the bigger picture. Everyone should at least come away recognising that it’s hard out there in Academia.

The challenge for the church

Where The Chair may fall short for some viewers is in its resolution. Without spoiling the end of this funny, fast-moving show, the outlook isn’t wholly positive. The show’s creators just capture a snapshot of the bigger story and offer no solutions. Which is frustrating to anyone looking for hope in the madness but is, perhaps, more realistic. You may end up feeling a sense of despair by the end.

Jesus offers something better. His disciples were people who would have hated each other - tax collectors (the “establishment”) and rebels (oppressed zealots). However, when they were with Jesus, their differences became insignificant next to his mercy, gentleness and wisdom. The Church should look like this, too, a place where people who would otherwise despise one another find unity in Jesus and forgiveness for their follies. In other words, the Church should be a place for both the canceller and the cancelled.

How do we get there? It begins by listening to others and trying to understand them. For a good place to start, try watching The Chair.