Oxford University apologised for hosting a Christian event. But was it really an attack on religious freedom?

Protecting free speech in universities is crucial, says Cambridge lecturer Gemma Simmonds. But while Christians still have the right to preach the gospel, they’d do well to remember Jesus’ overriding law of love 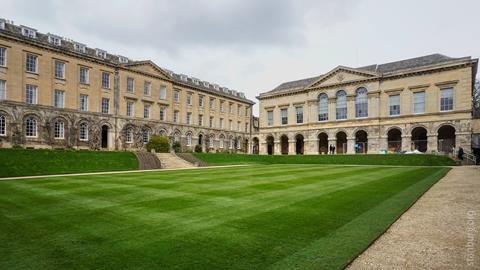 As a lifelong teacher, a current university lecturer and a former chaplain in the Universities of Cambridge and London I take academic freedom very seriously. Along with many colleagues, I am alarmed at the relentless erosion of academic freedom of thought and expression in the name of cultural sensitivity, along with the inexorable rise of cancel culture.

I can, and indeed have, taken violent objection to other people’s opinions in my time. I am a French/British dual national and was recently in Paris with some extended family, mostly of my parents’ age, who had lived under Nazi occupation. Coming out of Sunday Mass, I was aghast to find people standing within the church domain selling a purportedly Christian magazine with long antecedents in the pre-war French Fascist movement. Not one of the sellers looked more than 25 years old, and certainly none of them had ever heard the smack of Nazi jackboots on the streets of their city. I went up in smoke before I could stop myself and, to my family’s horror, stood yelling at the sellers to get their Fascist filth out of the church and go and sell it somewhere else.

When my elderly relatives remonstrated with me for making an exhibition of myself, I reminded one of them what the tattoo on his arm stood for. He got it in a Nazi concentration camp, and these people were hijacking the Church to peddle a very similar ideology to the one that gave him his war memento. I’m not sorry for my display of temper, or for my defence of the Church as a place where ideologies utterly contrary to the gospel of Christ are not welcome. But distressing and repugnant though I found their magazine, I would stand by the right of those young people to express its contents as part of a legitimate public debate. I just didn’t want it being done in the same place where we had just celebrated the Eucharist.

A place for debate

Universities, however, are just the place for such robust and challenging debates. Worcester College, Oxford hit the news last week for apologising that the Wilberforce Academy, a Christian group, held an event on its premises whose content was considered offensive. Some headlines appear to report that it was Christianity itself that was the provoker of the offence, but closer reading suggests rather more nuanced issues. It appears that talks were given during the event that discussed the “nature of Islam” and spoke in favour of conversion therapy for gay people.

We still have the right to preach the Gospel, but beyond different interpretations of its content lies the overriding law of love

It is the nature of serious religious debate in theology faculties across the country, including Oxford, to explore and question the relative claims of differing faith traditions and I am surprised and dismayed if that is considered offensive by students at the university. There is enough religious illiteracy out there already without adding to it. Ignorance fuels intolerance and we are assured by a reliable authority – Jesus - that the truth will set us free (John 8:32).

When I was a chaplain in Cambridge, Catholic students would sometimes complain that they, along with their Muslim and Jewish friends, had received cards printed by Christian groups telling them that they were destined for hell. Such claims have no place among followers of Jesus, who taught that he alone would distinguish between weeds and wheat on Judgement Day, according to his own criteria. But to raise the question of salvation in order to become better informed and more theologically confident is part of the adventure of study and entirely appropriate to a university.

Conversion therapy is contrary to contemporary scientific approaches to the vexed question of sexual identity. Here we tread a more challenging path between the need to treat all people with respect and compassion, while not necessarily endorsing their life choices, and the very serious current debates around gender. This is a philosophical, scientific and moral minefield, but that is no reason for those in search of truth not to walk across it, if they are willing to hear different sides of the debate with an openness to understanding others while holding opposing opinions.

In defence of free speech

The forthcoming Higher Education Free Speech Bill seeks to protect free speech in our universities and to prevent student bodies from permitting only those who share their own views to have a public voice. That is a totalitarianism of today’s ‘right on’ (which may become tomorrow’s unacceptable), and the antithesis of all that a university should stand for. Meanwhile, Christians right across the spectrum need to remember that Jesus’ primordial criteria were love, mercy and welcome - even of those furthest from his message of salvation. We still have the right to preach the Gospel (so far), but beyond different interpretations of its content lies the overriding law of love.

Gemma SimmondsSr Dr Gemma Simmonds CJ is a sister of the Congregation of Jesus, director of the Religious Life Institute and senior lecturer in pastoral theology at the Margaret Beaufort Institute of Theology, Cambridge. She teaches Christian spirituality at the Cambridge Theological Federation. She has been a spiritual director, retreat giver and lecturer for over 25 years, as well as having worked as a prison and university chaplain. She is the author of The Way of Ignatius and Dancing at Still Point (SPCK).