Ricky Gervais is still using old atheist objections in his 'cruel' comedy. But Supernature is entertaining

Ricky Gervais is still using tired atheist objections in his comedy. And while some Christians will also object to the bad language contained in the new Netflix special, sitcom writer James Cary wants to engage with the comedian's contentious material 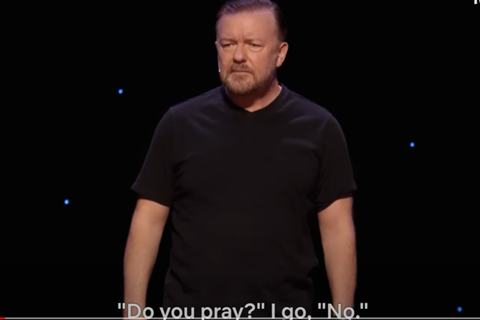 “Comedy is cruel.” I’ve heard this said a number of times in Christian circles.

There's also a widespread belief that Ricky Gervais likes to pick on us. But the comedian tends to talk more generally about the concept of God, using common arguments that we’ve heard from the atheists for decades. Christians are more likely to be repelled by his use of swear-words.

But there may be some Christians still interested in hearing what Ricky Gervais has to say in his latest Netflix special, Supernature. After all, Paul engaged with the philosophers of his day, and the high-profile comedians are the philosophers our day, except they use jokes and funny stories rather than arguments.

In Supernature, you will hear jokes about transsexuals, the Holocaust, AIDS, Muslims, fat people, female comedians, the Chinese and Eskimos as well as Christians. Put like that, maybe it doesn’t sound like a fun night in. It sounds more like a verbal, machine-gun-style tirade.

In fact, the show feels measured to the point of being almost ponderous. Many have criticised Gervais’s material not just for being cruel against members of those groups above, but for being tired and predictable.

Critics are looking for art. Crowds want entertainment. They pay their money and are hoping for something that will make them laugh. Artistic comedians like Stewart Lee or James Acaster expect the audience to lean in, follow them as they almost alienate the audience as they take them on a journey. The show ends up being more than the sum total of the parts.

There is no cumulative effect in Ricky Gervais’s Supernature. But he doesn’t care. Nor does the audience, who laugh along. They love Ricky. Rotten Tomatoes, as usual, reveals the yawning chasm between the critics wanting art and the punters who want entertainment. The critics give the “mean-spirited and clunky” show 20%, whereas the audience gives it 92%.

This is why Netflix pay Gervais handsomely for his time, even though he begins the show by saying he doesn’t need to do the show because he’s already rich. In fact, money is an interesting running theme in the show, and in Gervais’s public persona more generally. Most of the critics don’t even mention this in the clamour to slam his “jokes that rely on a cheap shock factor rather than any emotional or creative truth” (The Independent) as he goes about this “pedestrian progressive-baiting-by-numbers” (Chortle).

The British hate discussing money. It’s vulgar to the middle class, at least, but Gervais, brought up on an estate in Reading, constantly reminds the audience how much money he has. At one point, he explains that he has a gym in his own house in Hampstead, but still joined the gym down the road, but hardly ever goes. In fact, he says he could afford to pay an annual membership for a gym every day for a year.

He also explains how his money doesn’t solve his problems at the doctors, bringing us to another interesting taboo Gervais tackles: our relationship with food and weight. Type 2 Diabetes is a serious problem in our society, but discussing it honestly might get you accused of ‘fat shaming’. Gervais is ideally placed to talk about this subject being someone who struggles with weight himself, admitting that we lie about this problem, and don’t have the will to address it, even if we have the money.

Addressing these taboos with jokes in poor taste make more sense, however, when he talks about his upbringing. He didn’t grow up hugging people, especially not other men. In his world, men showed each other affection with horrible jokes, often at each other’s expense. He gives examples which are only funny because you know they are told within the context of affection and loyalty.

We live in a world where there is very little trust or community. This is why comedy is so contentious.

This is why Gervais talks about the importance of treating people equally. That’s why he includes them, he argues. And he has a point. If you say someone cannot be the butt of a joke, there is a sense in which you remove their dignity. You tend not to joke with strangers because there’s no relationship there. There’s no context for the joke and therefore it’s a big risk. 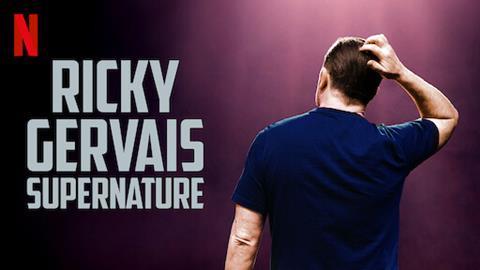 But one man’s inclusion is another man’s victimization. The reason for that is a lack of trust. Gervais claims that his jokes are affectionate and his fans trust him. Perhaps they trust him too much. Perhaps they indulge him. But his critics simply don’t believe he is worthy of trust, and they don’t trust his fans, saying his audience just “hoot and holler along with all the bigotry.” (The Independent). We live in a world where there is very little trust or community. This is why comedy is so contentious.

Comedy is not inherently cruel. No-one walks away from a Milton Jones gig having laughed for two hours feeling guilty about the cruelty they have just witnessed. Comedy is an art. It’s a form of expression as well as entertainment. It’s a tool to be used. Comedy isn’t cruel. People are cruel. Is Ricky Gervais cruel? The fact we’re discussing this, and that one short review only scratches the surface, suggests that maybe the show is art after all.