What Christians need to know about the 'white saviour' complex 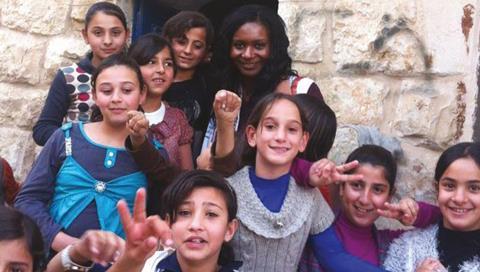 A few years ago, I went on a trip to Israel-Palestine with Christian Aid. I arrived at a mobile clinic where the other journalists and I were surrounded by young Palestinian children who excitedly practised their English on us and asked questions about SpongeBob SquarePants. After spending some time speaking to the young people, I asked to take a photo with them and uploaded it to my social media profile. Some time afterwards, I realised something didn’t quite sit right with me. It wasn’t just the realisation that I had used these children as props, but the fact that I looked slightly out of place. Amid a sea of brown faces, mine too was brown, whereas most of my life I have been used to seeing images where the so-called ‘saviour’ who has gone overseas on mission has a white face.

The great thing about overseas mission trips as a rite of passage for young Christians in the UK is that it opens their eyes to the world. But what’s wrong is the underlying subconscious idea, known as the ‘white saviour complex’. This is when a white person gives help to a non-white person in a self-serving way, whether they realise it or not. It makes white people – and Westerners like me – feel superior; it makes us feel good about ourselves, as we ‘save’ others.

The idea of enlightened white people helping poor, unfortunate brown people is even older than Rudyard Kipling’s poem ‘The White Man’s Burden’, but it was thrust into the spotlight in 2019 when David Lammy MP accused journalist Stacey Dooley of perpetuating “tired and unhelpful stereotypes” when she travelled to Uganda with Comic Relief. Following the backlash, and a review of how their fundraising appeals and imagery propagated stereotypes of African countries, Comic Relief announced they would stop sending celebrities to Africa and employ more local filmmakers. Sir Lenny Henry, who co-founded the charity, said: “It’s time for young black and brown filmmakers to take charge and say: ‘I want to tell you my story.’”

Many charities have not always got it right and have put forward a one-dimensional view of Africa to tug at white Britons’ heartstrings and meet fundraising targets. But today, many of us are finding new and innovative ways of fundraising that do not revert to lazy stereotypes. Brits are rightly moved when they see images and video footage of black and brown people suffering around the world. But we need to elevate empathy rather than sympathy. The coronavirus pandemic has shown us we have more in common with our brothers and sisters than we might have thought. The scenes we have witnessed of high death tolls and hospitals overwhelmed in places like India feel familiar because, for the first time, we have experienced the same trauma at the same time.

We should care about people living in poverty around the world because they are people just like us. People who want the same as us: dignity, safety, security, shelter, food, love. The white saviour complex elevates white people to a role that saves rather than stands in solidarity with. As Christians, we should be compelled to help others because they are our family; people just like us, not people in any way less than us.

Chine McDonaldChine McDonald is a writer, speaker and broadcaster. She is director of Theos, the religion and society thinktank, and previously headed up public engagement at Christian Aid. She is the former communications director for the Evangelical Alliance. Her latest book is [itals]God Is Not a White Man[end itals] (Hodder & Stoughton). She studied theology and religious studies at the University of Cambridge and is a trustee of Greenbelt Festival and Christians in Media
Follow @https://www.twitter.com/ChineMcDonaldFacebook