Like Ronaldo, I lost a son. At first I wanted to scream at God. But now my faith is stronger

When Cristiano Ronaldo and Georgina Rodriguez announced the death of their baby, it brought back memories for Ian O’Reilly, whose own son, Tristan, died days after being born at Shrewsbury Hospital. 22 years later, his faith has been tested and refined by his grief, but is stronger for it 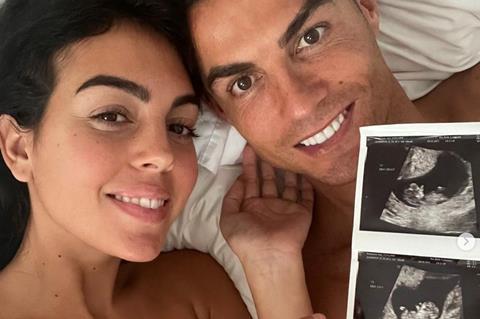 Ronaldo, 28 and Georgina Rodriguez, 37 announced the death of their baby boy on Monday, saying it is the “greatest pain that any parents can feel”.

The problem with grief is that it catches you out at the most unexpected times. I opened Twitter the other day to read that Cristiano Ronaldo and Georgina Rodriguez lost their baby son. Following on so soon after the Donna Ockenden report into baby deaths at Shrewsbury and Telford Hospital NHS Trust, which included our own baby son, it felt like I couldn’t escape from what is one of the worst things that can happen to anyone. I was transported back to that day in January 2000 when our world was changed forever.

“The midwife has told me I need to go to the hospital now.” The anxiety in my wife’s voice on the telephone was clear. I cancelled my planned trip to London and we headed to the hospital. Being around emergency procedures but not directly involved is strange. You’re in the midst of a whirlwind of activity, watching others take seemingly instantaneous decisions. After sitting around for most of the day while the baby’s heart rate was monitored, the medical team suddenly announced that they needed to do an emergency caesarean section that afternoon.

I learned to embrace the mystery, and to live with the unanswered questions

I changed into scrubs and sat alone on one of those typically shabby NHS chairs while my wife had to endure the spinal block anaesthetic alone. As I stared down the long corridor, watching the routines and movements that typify a large, busy hospital, I felt a dread creep over me. It is difficult to put into words something so abstract, but it felt like a black cloud, or darkness, enveloping me. It felt like death. And at that moment, I knew the situation was pretty bad. Tristan was born on the 31 January 2000 and died, just days later, in hospital. As we held him in his final moments, the air became thick, everything slowed down and I know Jesus came to take him.

We tried to get back to normal. But the first Sunday back at church I stood there, with 300 people singing: “You are good, you are good, and your love endures” with such conviction I felt an overwhelming desire to shout, scream and tell everyone to just shut up. Of course, I didn’t. Instead I slipped out of the back and leaned against the wall, gasping for air like a fish suddenly finding itself marooned on a river bank. A good friend followed me out, looked at me and just said: “Let’s go for a walk.”

As we wandered by the River Severn, I tried to explain what I was feeling, conscious of the helplessness my friend was feeling. Finally, while staring at the Sunday morning rowing teams going through their paces in the early spring sunshine I blurted out: “I hate it. I can’t believe it any longer. I hate what this is doing to my wife, and I hate that I can’t do anything to help her or reach her.”

Here’s the important point. There was nothing my friend could say or do and I am glad that, at that moment, he didn’t even try. But I was glad he was there to hear it nonetheless; that I could finally give voice to the burning rage that was consuming my insides. It didn’t fix anything, it didn’t take the pain away, but it felt good to let it out.

In truth, the pain felt as real a year later as it did the day after

That’s the funny thing about grief; talking about it doesn’t always make it better. Often, having to talk about it in a formal setting, such as a pastoral visit or counselling session, means you’re still wearing a mask. There weren’t many times that I was able to pull that mask off and show the world what I was really thinking or feeling. It was hard having to keep up appearances because, after a while, we are supposed to find healing in God’s presence - or some such sentiment. But that doesn’t always happen. In truth, the pain felt as real a year later as it did the day after. In some ways, the permanence of the reality that Tristan was dead continued to colour so much of our daily routine that it was even more present.

Struggling through the mystery

In the end, what helped me wasn’t the well-meaning words of friends and pastors. I work in publishing and, one day about three months after losing Tristan, I was talking with an author. I said to him: “What I am struggling with is that, if God is omnipotent, he could have healed Tristan and chose not to. How do I process that and still believe God to be good?” He replied: “That is the fundamental question you need to face. If you avoid it, or go round it, you will never find healing or peace. You need to walk right through the middle of that hard question.” He was right, and although I still don’t have a rational answer to it, I have something else. I learned to embrace the mystery, and to live with the unanswered questions. To find God in the pain and the grief as well as in the joy of life.

Twenty-two years later, I still miss Tristan like crazy, and there are days where the grief still makes an appearance. But I have been able to enter into the mystery of God and find a place of safety and love in him. I think my faith is stronger because of what happened, but it is no longer a simple, shallow faith. It has been tested and refined through grief and in that, I find I able to identify with a father who allowed his own son to die for us all.

Ian O'ReillyIan O'Reilly has spent 25 years publishing Christian books working with British and American publishers. He now works with Eden, developing and discovering how the Church can embrace and use the digital world to communicate and disciple. He lives and worships in Shrewsbury, Shropshire where he lives with his wife. He has three children and one grandchild who brings joy to him every day.