Why Putin's threats against Ukraine are increasingly religious

There is a seam of religiosity in the brewing conflict, says George Pitcher 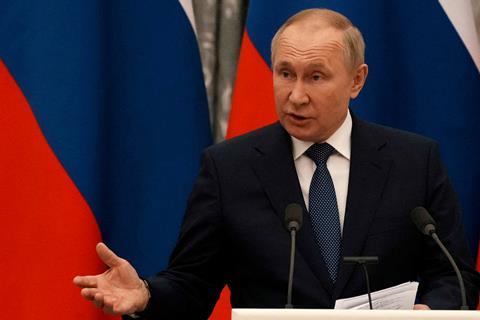 It’s difficult to know what Britain’s defence secretary, Ben Wallace, really meant by there being a “whiff of Munich in the air” when referring to efforts by the US and UK to de-escalate the threat of a Russian invasion of the Ukraine. It was left to the secretary of state for Northern Ireland, Brandon Lewis, to act as Wallace’s spin doctor – what Wallace had really meant, he claimed, was that “Russia had continued to move troops” during negotiations.

But Wallace had said the whiff had come “from some in the West”. So this seems to be less about Russian president Vladimir Putin negotiating in bad faith, as Adolf Hitler had in Munich with the British ahead of the Second World War, and rather more about the West’s pusillanimous and pointless appeasement policy towards Hitler, being rather what we are now doing towards Putin.

The logical conclusion of that is that Wallace meant Nato should just start to bomb the hell out of Putin’s Russia now and be done with it. Why sacrifice Ukraine in 2022 as we sacrificed Poland and the Czechs in 1939? Fighting talk, Mr Wallace.

But there is nothing logical about anything the British government says currently. Much more likely is that Wallace simply wanted to claim some of the available moral high ground. In this narrative, Putin is as wicked as Hitler and we in the West are the goodies if we emulate the hawkish Winston Churchill (co-incidentally PM Boris Johnson’s hero) rather than the appeasement dove of Munich, Neville Chamberlain.

In introducing morality to the territorial diplomacies, Wallace is – intentionally or otherwise – mining a seam of religiosity in the brewing conflict between Putin’s Russia and the West. And the source of that idea of a war of religion, on only one side of which God’s people are encamped, goes back a lot further than Munich. There really is (Ecclesiastes 1:9) “nothing new under the sun”.

Back at the beginning of the 6th-century BC, King Jehoiakim of Judah had flip-flopped between obeisance to Egypt and the Babylonians. King Nebuchadnezzar of Babylon lost patience with him and laid siege to Jerusalem, which fell in 597 BC, after grotesque bloodshed. Significantly, Nebuchadnezzar made a point of pillaging the Temple as a means of subjugating the defeated Jewish people.

Replace Egypt with Nato in this scenario and you pretty much have Russia’s attitude to Ukraine. Meanwhile, Ukraine trains its elderly women in small-arms combat, rather as the civilians of Jerusalem must have prepared to meet the marauding hordes of Babylon.

Fast-forward to the year 70 AD and it’s Rome’s turn to lose patience with Jerusalem. Judean rebels had taken control of the city four years previously, rather as Ukraine declared itself independent of Russia in 1991 and became a market economy. Roman troops sacked Jerusalem and again destroyed the Temple, as a means of subjugating the religion and culture of its inhabitants.

These Roman and Babylonian wars were conflicts of localised hegemony, imbued with the potency of destroying the monotheism of the ancient Hebrews and replacing it with their own varied deities. At a glance, this latter war aim may seem to bear little resemblance to Putin’s desire to control the strategically important Ukraine, on Russia’s vulnerable south-western flank.

it all goes horribly wrong when the West invokes religion in its war efforts – witness George W. Bush’s talk of “crusade” in his “war on terror”

But Putin’s motives are religious in the wider sense. He sees Ukraine as a heresy to his own Russian dominion. Ukraine is a proper democracy, with free speech and free media, electing its leaders in free elections. These are not articles of faith that he can afford ordinary Russians to adopt.

All this more than complicates the West’s response to Putin’s belligerent posturing over Ukraine. The US and UK need to look strong and behave even more strongly. The problem is that our institutions of government are modelled on Judeo-Christian principles, the declaration of which will encourage Putin simply to kick sand in our face.

We know that it all goes horribly wrong when the West invokes religion in its war efforts – witness George W. Bush’s talk of “crusade” in his “war on terror” ahead of 2003’s Iraq invasion. But the Christian alternative is to talk of power that “is not of this world” (John 18:36) and that’s of precious little comfort to the people of Ukraine right now, who very much have to live in a world that threatens them with imminent extinction.

So it may be a moment to dust off St Augustine’s case for “Just War”. The awful alternative is to stand by and leave Ukraine to its fate – or, almost as bad, to indulge in weasel-words about a “whiff of Munich”, which amount to neither the worldly strength of the Roman imperial cult nor the silent power of the Christ who stood against it.