After 26 years of working in academia, it took a worldwide pandemic to cause Lee Marsden to reassess his priorities. Now he’s calling on Christians to invest in ending homelessness 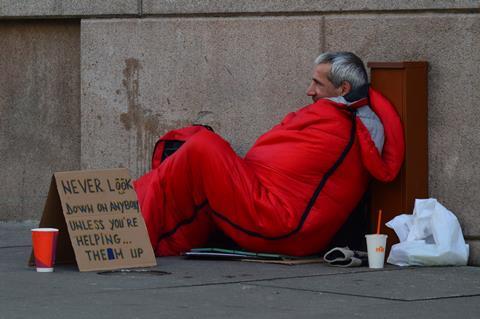 “Is not this the kind of fasting I have chosen: to lose the chains of injustice and untie the cords of the yoke, to set the oppressed free and break every yoke? Is it not to share your food with the hungry and to provide the poor wanderer with shelter” (Isaiah 58:6-7).

As I sat reading these familiar words and let them sink in, I felt a nudge from the Holy Spirit: I could apply them to another time and place, or respond to an inner prompting to do something now; to to provide shelter to the poor wanderer – the homeless.

But how to do that was another matter altogether.

I felt convicted of the need to do more than simply buy a copy of the Big Issue or give some small change - but what?

I had no background in working with homeless people, or indeed the voluntary and charity sector. For the past 26 years, my working life has been confined to academia’s ivory tower.

As an 18-year-old, I dropped out of university but, 20 years later, I returned to the University of East Anglia as a mature student. It turns out I was pretty good, and a first-class honours degree, a distinction at Masters and a PhD in International Relations led naturally into an academic career.

Starting out on the bottom rung in 2007 as a junior lecturer, within six years I had been promoted to full professor and head of school. Things were going well; I enjoyed coming into work each day and still had time to research, write and teach. Then the Covid pandemic struck and the world turned upside down.

Several of my colleagues contracted coronavirus, teaching moved online, student and staff mental wellbeing declined to unprecedented levels and, during that first lockdown, many of us considered our own and others’ mortality, as well as everything we had hitherto taken for granted. For me, it led to questioning whether I was in the place God wanted me to be. What if I had climbed the ladder of success in academia only to find that it had been propped up against the wrong wall?

As I prayed and wrestled with these issues, I was increasingly struck by God’s preferential treatment of the poor and oppressed. As we emerge from the worst of the pandemic, social injustice and inequality have been exacerbated further and brought into stark relief the most visible manifestation of that injustice - the street homeless.

During the first lockdown, rough sleepers were taken off the streets and housed in hotel accommodation to prevent further spread of the virus amongst society’s most vulnerable. It demonstrated, clearly, that the problem of homelessness can be alleviated, if there is the will to do so. But when lockdown ended, the homeless were returned to the streets. And society seems content to tolerate it. Personally, I felt convicted of the need to do more than simply buy a copy of the Big Issue or give some small change - but what?

My home church supports two houses for the homeless through Hope into Action, a national Christian homeless charity. The charity, which was established in 2010, has a vision for every church in the country to support at least one house for the homeless.

Starting with their first property in Peterborough, Hope into Action now has 100 homes across England - each linked with a church – and supports over 350 tenants, including around 90 children. The vision, to encourage churches and individual Christians to share their wealth with the poor by investing in homes for a five-year period, is one which spoke deeply to me. It reflects God’s heart for the poor and dispossessed.

What if I had climbed the ladder of success only to find it had been propped up against the wrong wall?

When an opportunity to work for Hope into Action arose, it seemed that God was leading me in a new direction. Despite my lack of experience in the sector, I am leaving the ivory tower behind and trusting fully in him. I have resolved to follow God’s prompting - to help churches house and love the homeless.

Lee MarsdenLee Marsden is head of supporter relations at Hope into Action. He was formerly professor of faith and global politics at the University of East Anglia. He is the author of seven books including For God's Sake: The Christian right and US foreign policy (Zed/Bloomsbury) and Religion and International Security (Polity). He is currently training as pioneer lay minister in the Church of England.