When are we going to do something? Why America needs Christians to stand up for gun law reform

The Uvalde school massacre is the second mass shooting in America in less than two weeks. It’s time Christians recognised that the Second Amendment is not inerrant, says Rev Peter Cook. The sensible regulation of weapons is urgently needed 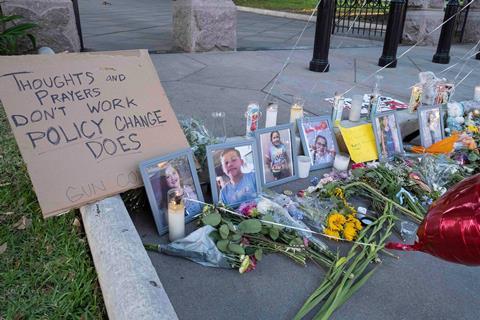 A memorial for the victims of the Uvalde school shooting. Photographs of each victim lay at the steps of the Texas State Capital. Austin

The massacre of 19 children and two teachers at Robb Elementary school in Ulvade, Texas, was the second mass shooting in the US in less than two weeks. Salvador Ramos, who carried out the second-deadliest school shooting in US history, bought the semiautomatic AR15-style assault rifle legally, just shortly after his 18th birthday. In Buffalo, New York, another 18-year-old killed ten people - nine of whom were black - in a Tops supermarket. He also used an AR15 semiautomatic assault rifle, legally purchased without even a permit, and then retrofitted it with magazines illegally obtained from another state.

In the aftermath of these tragedies – which are becoming increasingly common events in the US - some politicians have suggested that these young men needed better mental health care. Still others suggest that the answer is to arm teachers and supermarket personnel, even though, ironically, there was an armed security officer at Tops. He did indeed slow the gunman but, ultimately, failed to stop the carnage. And he lost his own life in the process.

Christians should call for the sensible regulation of weapons so that we don’t destroy our community and, in the process, destroy Christ himself

In the United States, it seems we come up with every solution to stop gun violence except the best one: passing real, effective gun control laws. Better mental health care is always needed but good gun laws are still the best choice. Rev Dr Martin Luther King, Jr. once said: “It may be true that the law cannot make a man love me, but it can stop him from lynching me, and I think that’s pretty important.”

We know that gun control works. In other countries - such as New Zealand and Australia - crackdowns on the possession of guns following massacres have made them safer. And in the USA, President Bill Clinton signed a ten-year assault weapons ban in 2004, which prohibited the sale of the AR15 and other similar semiautomatic rifles. The result? An appreciable drop in gun deaths. But when the ban expired in 2014, gun sales rose and the carnage began to mount again.

The proposed changes would not outlaw gun ownership, but include establishing a national ‘Red Flag’ law to prevent those who pose a threat to themselves or others from being able to legally possess a firearm, and a system of more thorough background checks before the sale of firearms. As one New York Times journalist recently put it: ”In much of America, there is a more thorough review of people adopting a rescue dog than of those buying assault rifles. And should we really continue to allow people on the “no-fly list” to buy firearms but not board a plane?”

So why is it so hard to get gun laws changed in America? The Second Amendment to the United States Constitution was ratified on December 15 1791. It states: “A well-regulated Militia, being necessary to the security of a free State, the right of the people to keep and bear Arms, shall not be infringed.” Interpretations of the amendment have varied historically, but according to Beverly Bandler, its original intention was clear: “The United States Supreme Court addressed the Amendment three times in 1876, 1886, and 1939 and, on each occasion, held that it granted the people a right to bear arms only within a militia. The first law review article asserting an individual’s right to own firearms for self-defense (or sport) did not even appear until 1960.”

The reference to “a well-regulated militia” was the language of compromise, employed to keep the southern states of America in the Union. The Second Amendment allowed slave owners to deploy ‘slave patrols’ – militia whose sole purpose was to prevent slaves escaping or rebelling. The Bible was routinely used to justify slavery, and its maintenance through terror. From the 1960’s onwards the Republican party, forgetting its abolitionist roots, have conveniently used this twisted view of religion to build their political base, using the language of law and order and the protection of state rights to roll back the gains made by the civil rights movement. For many politicians, Christianity is synonymous with protecting white families and white rights (with weapons if necessary) and blessing mass incarceration, which has deep roots in the institution of slavery.

The suspected Buffalo shooter published a 180-page manifesto online, full of the ideology of white supremacy. That ideology includes replacement theory, which contends that white, Christian Americans are threatened with replacement by black and immigrant voters. In response, we enact voter suppression laws and routinely disinvest in black and brown communities like East Buffalo. This white authoritarianism, covered by a thin veneer of religiosity, gives cultural permission for a twisted interpretation of the Second Amendment to survive and thrive.

Most Christians in the US are opposed to using violence and arms to diminish the humanity of anyone. We are all created in God’s image, regardless of race or religion. We hold our allegiance to Jesus who re-presented the Jewish Shema in Deuteronomy 6:4-5 by calling us to love God and our neighbour (Mark 12:30-31) through building caring communities. If history is our guide, we know that the Second Amendment is not inerrant. It is culturally and politically conditioned. Therefore, we choose Christ, who challenges our culturally informed legal system and, instead, points us to the kingdom of God. Holding true to our faith, Christians should call for the sensible regulation of weapons so that we don’t destroy our community and, in the process, destroy Christ himself.

It may be true that the law cannot make a man love me, but it can stop him from lynching me, and I think that’s pretty important

After the terrible massacre in Uvalde, the coach of the Golden State Warriors basketball team, Steve Kerr, refused to talk about his team’s upcoming game and, instead, used his press conference to express his intense anger at the politicians preventing changes to gun legislation from being passed. “In the last ten days, we’ve had elderly Black people killed in a supermarket in Buffalo, we’ve had Asian churchgoers killed in Southern California, now we have children murdered at school,” he said. “When are we going to do something?”

Kerr, whose own father was assassinated by a gunman in Beirut in 1984, made clear the feelings of many American citizens: it’s a matter of political will to change the law. But many politicians, including Christians, choose not to vote for reform, fearing backlash from lobbyists and constituents, to say nothing of the huge amounts of money that many are paid by the National Rifle Association.

Texan Senator Ted Cruz is one of those. He has come under attack this week after tweeting that he and his wife, Heidi, were ”fervently lifting up in prayer the children and families in the horrific shooting” - despite running an election campaign ad stating: “After Sandy Hook, Ted Cruz stopped Obama’s push for new gun-control laws”.

As we remember the massacred grocery shoppers in Buffalo, the school children and their teachers in Uvalde, those killed in the Taiwenese church in California - as well as the countless others killed by gun crime in the USA every single day - we should reject the false idol worship of weapons, and instead counter a culture of violence which will help a diverse United States to flourish once again.

Peter CookRev Peter Cook is executive director of New York State Council of Churches, an ecumenical organisation that advocates for changes in laws and policies to help the poor and disenfranchised and to improve the environment. Ordained in the United Church of Christ, Rev Cook has and MA and MDiv. from Pacific School of Religion in Berkeley, California