Shane Claiborne: The US has a gun problem, the UK has a knife problem. Here's what we can do

My bi-vocational blacksmith pastor friend and I have been touring the United States with an anvil and a forge, turning guns into garden tools in a different city every night – a project we’ve called “Beating Guns”.

It’s all inspired by an ancient vision cast by the biblical prophets Micah and Isaiah, where they speak of a day when people will “beat their swords into plows and their spears into pruning hooks” – turning the tools of death into the tools of life.

We first embarked on this adventure of transforming weapons about six years ago. We've since heard so many stories from around the world of others doing the same thing.

There have been guitars made out of handguns and saxophones created out of semiautomatics. We’ve had folks send images from Iraq of guns being crushed in the streets. We’ve seen enormous pieces of public art made from melted guns. We’ve even seen folks make Christmas ornaments out of tear-gas canisters. And we’ve had folks shot by guns and folks who have shot people with guns beat on the same anvil.

There are over 300 million guns in the USA - that's more guns than people! In fact we are producing one gun every 3 seconds. We have a problem.

But in the UK it's different. Last year there were nine times more knife deaths than gun deaths in the UK, with over 285 murders in one year, the highest since records began.

So we're going to call our UK tour "Beating Knives". We'll be transforming knives taken off the streets of the UK into more redemptive things, like plows and art, like the giant angel sculpture which has already been created out of discarded knives.

A gun problem...or a sin problem?

Undoubtedly there are those who will say it is not a knife problem, it's a heart problem or a sin problem. That’s what we hear all the time here in the US: “Guns don’t kill, people kill.” But what we’ve realised is that people with guns kill more people, and maybe it’s the same with knives?

Gun/knife violence is both a gun/knife and a heart problem. God heals hearts, people change laws. We need both.

We could get rid of every gun in the US and every knife in the UK, and people would still find ways to kill each other. We’ve seen folks use cars as weapons, driving them into crowds, and even creating bombs out of pressure cookers, as was the case in the Boston Marathon massacre. No matter how good our laws are, a law cannot change a racist or violent heart. That’s why violence is a heart problem.

It's also an economic problem and a social problem. We are socialised to believe in violence, in many different genres – video games, movies and media, even comic books and news articles.

It’s true that no law can change a human heart. You can’t legislate love, or criminalise hatred. But we can do a better job of affirming life, and love, and compassion and all good things. That’s why we must take a close, introspective look at the hatred and violence surfacing and growing in so many of our countries.

You can’t legislate love, or criminalize hatred. But we can do a better job of affirming life, and love, and compassion and all good things.

Semiautomatic military-style weapons like the AR15 and AK47 are still legal on the streets of America, and they are the weapon of choice in mass shootings. That proved to be true once again in New Zealand in the recent attack by a man armed with multiple firearms. What is encouraging in the aftermath of that massacre is the outpouring of love and solidarity to Muslims around the world. Folks around the world have chosen to side with love instead of fear, hatred and Islamophobia. And within 24 hours New Zealand began to change its gun policies. Many voluntarily got rid of their guns.

Politicians in the US can take some lessons from the other side of the world - not just New Zealand - but also from the sensible restrictions on guns in the UK. No doubt these laws are why gun deaths have nearly disappeared in the UK. Just to show you how mad our policies are in the US - it is illegal to carry a knife in Philadelphia, but it is still legal to carry a gun.

Some will say, “All we can do is pray.” That’s a lie. We can pray, and we must pray. But we can do more than just pray. We can organise and build healthier communities, and better jobs. We can teach love instead of fear, and the value of diversity. We can train ourselves in nonviolence, and restorative justice.

When we ask God why 38,000 lives are lost each year, God may throw the question back to us: "Why do we allow it?" Maybe the same is true of knives in the UK?

When we ask God to move a mountain, sometimes God hands us a shovel. Or in this case: an anvil, a forge, and a hammer.

We have the audacity to believe that it is not the will of God for 105 people to die from guns each day in the United States. The world doesn’t have to be this way. We who refuse to accept the world as it is and insist on building the world we dream of.

Faith is believing despite the evidence and watching the evidence change. But sometimes our greatest challenge is our imagination.

The world we are waiting for

I’m honored to be coming to the UK and look forward to adding my voice to the cloud of witnesses who want to see less violence in our neighborhoods and in our world. As an American, it’s obviously not my job to prescribe the solutions to the UK’s problems. We’ve got our work cut out for us here in the US – and as Jesus said, we should get the log out of our own eye before working on the speck in our neighbours. But I am eager to offer space to grieve the lives lost and impacted by knives and guns and all forms of violence and hatred, as we symbolically transform knives into something better.

The Bible ends with a vision of the new Jerusalem - a city that has been healed and restored, with a river of life and a tree of life and a gate that is left open to all. How beautiful it is that the Bible begins in a garden and ends in a city! The new Jerusalem is a city brought back to life, a city where the gates are left open and kids can play without fear.

May we be the midwives of a better world - through our prayers, by our lives, and with our hammers. 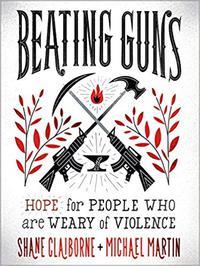 Shane Claiborne is a prominent speaker, activist, and best-selling author. He worked with Mother Teresa in Calcutta, and founded The Simple Way in Philadelphia. He heads up Red Letter Christians, a movement of folks who are committed to living "as if Jesus meant the things he said." His latest book is Beating Guns (Brazos Press)