The media won't celebrate these inspiring Christian women. But I will

On International Women’s Day, it’s easy to celebrate the female celebrities campaigning for social justice. But what about the everyday women without platforms who are fighting for religious freedom, asks Sofia Hörder? 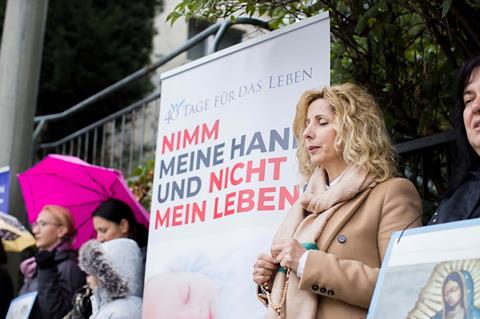 On International Women’s Day, we celebrate the social, economic, cultural and political achievements of women.

It is a day to appreciate advocates who raise their voices on important issues like Malala Yusafzai does for girl’s education, Angelina Jolie for breast cancer awareness or Blake Lively regarding child sexual abuse.

But there are other women who raise their voices outside of the spotlight who, instead of being celebrated for it, face censorship. Take Päivi Räsänen in Finland, Pavica Vojnović in Germany, or Darja Pečnik in Slovenia for example. Their names are perhaps less familiar. They don’t have the platform or public support that the others do. These women are standing up for their faith and the freedom to express it, but they are facing strong opposition - and even court cases - because their beliefs are not considered popular.

It is surprising, because Päivi Räsänen’s profile and achievements would appear to fit the prime example of female empowerment that the world likes to lift up as a role model. Päivi is a trained medical doctor turned public servant and mother of five, who rose to serve her country as Minister of the Interior. She is also a grandmother of nine who continues to fulfil her duties as a member of parliament with the same dedication that she did when she started over 25 years ago. But Päivi is also a Christian, and speaking out for the millennia old teachings of her faith is what landed her in hot water.

We must support not only the Malalas, Angelinas and Blakes of today, but also the women with more challenging messages

As an active member of the Finnish Lutheran Church, Päivi questioned her church leadership’s decision to sponsor the Helsinki Pride parade in 2019. She attached a picture of Bible verses from the New Testament book of Romans to her tweet. Although she did not use any derogatory language, or even address anyone in particular, her question of whether the leadership’s decision was in line with what the Bible said resulted in over 13 hours of police interrogations, criminal charges carrying a potential maximum penalty of two years in prison, and a full-blown trial.

Although church leaders and supporters from all large Christian denominations affirmed that the view of marriage and sexual ethics that Päivi was defending adhered to long-held traditional Christian teachings, Päivi was charged by the General Prosecutor and attacked by the media for views that millions of others share.

Meanwhile in Germany, the Croatian-born Pavica Vojnović was shocked to learn that the city of Pforzheim was preventing her 40-days-for-life group from supporting vulnerable women and their unborn children in prayer in 2019. Pavica believes every life is valuable and deserves protection, and that society must offer better support to mothers in difficult situations. That is why her group offered silent, peaceful prayers in the proximity of a Pro Familia abortion advisory center and moral support to those who asked for it.

But last May, a lower court dismissed Pavica’s challenge to have restrictions on her group’s prayer vigils lifted. In their coalition agreement, the current German government has set out to limit the freedoms of assembly and speech of those advocating for the right to life, by branding prayer vigils like Pavica’s as “pavement harassment”. Even though in Pforzheim, the city’s lawyer could not point to a single woman who had complained about the vigils. Thankfully, in November, the court of appeal announced that it will hear Pavica’s appeal, restoring hope for the women who Pavica has helped through her ministry.

In Slovenia, Darja Pečnik experienced similar silencing when a state-owned bus company removed ads commissioned by her pro-life NGO Zavod ŽIV!M in 2018. They deemed the messages “We love life!”, “You are not alone”, “Step out of silence” and “I mourn my child”, accompanied by pictures of a happy family, a grieving mother and a woman holding a pregnancy test to be “intolerant”. Darja wants to stand by women in crisis, especially those facing unplanned pregnancies or the loss of a child. Her bus ads were meant to show them that they are not alone and alert them to offers of assistance. Her challenge to this censorship is also making its way through the courts.

The experiences of these women show the hypocrisy of a global day ostensibly celebrating women. Because women who go against the social orthodoxy of the day are being censored, not celebrated. Yet everyone should be able to live out their faith freely, without fear of backlash or persecution. We must support not only the Malalas, Angelinas and Blakes of today, but also the women with more challenging messages, and harder-to-pronounce names.

Sofia HörderSofia Hörder, writes for ADF International and can be found on Twitter at @HoerderSofia.