Church leaders should use their platform to speak truth to power, but I would much rather they use it to unequivocally preach the gospel, says Tim Farron 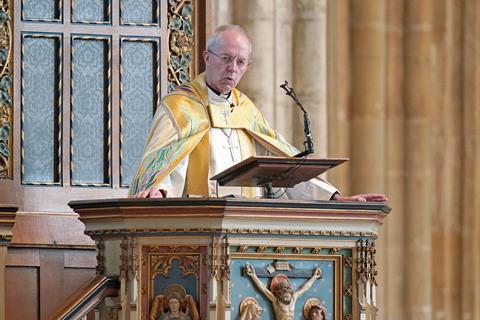 The Archbishop of Canterbury used his Easter Sunday sermon to – among other things – declare the government’s plans to ship refugees to Rwanda is ungodly.

The plan would see the UK subcontract its processing of refugees arriving in the UK through irregular routes to Rwanda, where it is thought their asylum cases could be heard. But the Archbishop called the approach “opposite to the nature of God” saying that Easter, when we celebrate Christ’s death and resurrection, was not the time for us to “subcontract our responsibilities”.

How should we think about this contentious issue? Firstly, the Bible tells us that we are to love our neighbour (Mark 12:31). And the famous parable of the good Samaritan (Luke 10) tells us that our neighbour is everybody, especially anybody in need. That includes people we don’t like, people from alien cultures and people we are suspicious of, because that’s how the Samaritan would have felt towards the injured Jewish man lying in a ditch. It really is radical stuff.

Given that most refugees who cross the channel in small boats do turn out to be genuine refugees, many will say it is wrong to deport those people just because of how they got here. But supporters of the government will respond by saying that the Rwanda plan is about deterring the people traffickers who enable refugees to risk their lives crossing the channel. While I do see that point, for any refugee who isn’t from Syria, Afghanistan or Ukraine, there are almost no safe routes to claim asylum in the UK, and so people from places like Iran, Eritrea and Sudan have no option but to make those risky journeys.

Welby’s remarks did draw sincere anger from some, including from my friend, the Christian Conservative journalist and commentator, Tim Montgomerie. Tim said: “Christians can legitimately support or oppose the Rwanda policy if – in their souls – their ultimate aim is a safer, sustainable refugee policy.” He added: “how dare my Archbishop say Anglicans like me are acting against God because we favour a different path to shared goals?”

I have sympathy with Tim’s reaction: it is perfectly possible for Christians to have different views on a policy like this, as long as our motivations are to do good in God’s sight.

To put my cards on the table, I strongly disagree with the government’s policy. In part, because I don’t think it will solve any problems, but mostly because I doubt the government’s motivation. It feels more like a policy designed to create a politically-helpful culture war, rather than to address a real problem. The UK is not awash with asylum seekers - most countries in Europe take more asylum seekers per head of population than we do. To use desperate victims of war and persecution as pawns in a political game seems unquestionably wrong to me.

For any refugee who isn’t from Syria, Afghanistan or Ukraine, there are almost no safe routes to claim asylum in the UK

So was Archbishop Welby out of order to step into politics like this? Not in my opinion. The Bible tells us that there is good and evil, and that we are not to be nice, inoffensive or neutral on such matters. We should be humble and prayerful about speaking into our culture, and politics, and do so carefully, fully aware of our own need for forgiveness. But we should speak. The Jesus who overturned the tables of the money lenders in Matthew 21, and condemned those who gave to the temple rather than taking care of their elderly parents in Mark 7 was not neutral on the rights and wrongs of the culture in which he lived.

Offended by the gospel

I want church leaders to speak truth to power, to offend, and indeed shame, those who make bad choices for bad reasons. But I also want Church of England leaders to speak the gospel - and I too rarely hear them using their platform to unequivocally do that. The gospel is far more offensive than anything Archbishop Welby could have said about refugees. Perhaps that’s why we don’t hear it too often.

Christianity is radically counter cultural - it isn’t woke or anti-woke - such considerations are pathetically puny in comparison. Instead, it claims to be the ultimate truth. It tells us that we are not our own and that we will face God’s judgement. It crushes our egos, telling us that we all need forgiving; it denies us vengeance by telling us to forgive. It tells us that Jesus, not politics, is our only hope. It tells us that all have sinned and fallen short of the glory of God, that the wages of sin is death, but that the gift of God is eternal life through Christ Jesus.

On balance, I think Archbishop Welby was right in his remarks, but I’d love it if church leaders chose to be truly offensive and preach the gospel.