Praying for Ukraine may not change God's mind. But it will change you

As Lent begins, George Pitcher has been wondering how Christ's instruction to "sell all you have and give the money to the poor" applies to the conflict in Ukraine 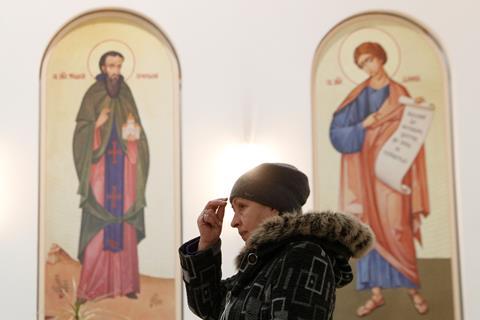 There is a story, said to be true, of a wealthy and young insurgent in the Middle East seeking out his rebel leader to ask what he might do to liberate himself and his people from the dictatorship under which they’re oppressed, because he’s heard that that’s how he and his name will live forever.

His leader gives him a stark and uncompromising reply: He should sell all he has and give the proceeds to those who needed it so desperately. The young man leaves his leader somewhat depressed, because what he has amounts to really rather a lot.

This is the story of the rich young man, related in all three synoptic gospels, who approaches Jesus of Nazareth to ask him what he should do and, perhaps, to ingratiate himself. It’s a gospel incident that will have been top-of-mind lately for many a latter-day disciple wondering what to do in the face of the brutality unfolding on the blameless people of Ukraine.

It’s probably as depressing an injunction to us in western Europe today as it was to the young man who originally received it. We can’t, we won’t, sell all we own to aid Ukraine’s “poor” - the wounded, the dispossessed, the terrified trail of refugees. And so we fall way short of what is expected of us.

The non-canonical Gospel of the Nazarenes, which follows the line of Matthew, adds this helpful elaboration from Jesus, arguably the head-honcho Nazarene: "…and look, many of your brothers, sons of Abraham, are clad with dung, dying for hunger, and your house is full of much goods, and there goes out therefrom nought at all unto them."

That seems to introduce a welcome level of degree to our charitable response, if we are to love our neighbours in Ukraine as ourselves. We ought, in our wealth, to give all we have. But doing something is better than nothing. If nought goes out from us, then we really don’t get it.

Meanwhile, the level of frustration and guilt in the face of Ukraine is palpable. It’s a point that Vanessa Feltz made in a spot I did for her Early Breakfast Show on BBC Radio 2 this week. She asked: "So many people are in turmoil… This ghastliness playing out in Ukraine, just a very short airline trip away, and not knowing how to behave [or] quite what to do… feeling so peculiar about everything and kind of guilty… what do you say to your congregation about that?"

What indeed? We had a very sombre service last Sunday and there were tears in eyes, reflecting that “feeling so peculiar”. It was the last Sunday before Lent starts this week, and the gospel reading was the Transfiguration, when the disciples recognise their leader for who he really is on Mount Tabor. I said then that if we recognise him for who he truly is, then we have no choice but to follow him down that mountain and across the plain towards the violence, darkness and death that awaits him. Towards Jerusalem. Towards Ukraine.

But the frustration prevails. That dispiriting feeling that all there is available is prayer, when what is needed is healing action, not words nor reflection. What is needed is to sell everything and equip those who need it.

A first response to that: Prayer is not nothing. Rather, prayer is not doing nothing. Done right, prayer does not change the mind of God – who is impassible, meaning he isn’t biddable – but always, every time, changes us. I say when done right, because prayer isn’t a shopping-list petition of God, it’s the bringing of ourselves into an eternal presence, an unconditionally loving gaze, and that always alters us to be more authentically ourselves.

prayer isn’t a shopping-list petition of God, it’s the bringing of ourselves into an eternal presence

The season we’re just entering, Lent, is an opportunity in this regard to undertake an annual journey of self-discovery and growth, to examine our priorities and the forces that are controlling our lives (which is where fasting comes in, as a means to an end). Stripped of many of the distractions of self, we can more easily see what’s vitally important. And we’re better equipped to respond – by giving what we can where we can, offering welcome to the stranger and refugee (not just for fruit-picking), for lobbying public policy to protect the vulnerable.

Fear gets in the way of all this. And we shouldn’t be afraid of fear. Because it’s always there. As Joseph Conrad wrote: "Fear always remains. A man may destroy everything within himself, love and hate and belief, and even doubt, but as long as he clings to life, he cannot destroy fear."

So it’s not a question of giving up something for Lent this year. It’s more a matter of giving up for Lent – giving up ourselves, giving up distraction and self-pity and self-absorption. By Easter, please God, that may equip us properly to offer a new life to Ukraine.