Nusrat Ghani MP says she lost her job for being a Muslim. As a Christian country we cannot stand for this

George Pitcher is Nusrat Ghani’s local church leader. He writes on his friendship with the MP, who has this week claimed she was sacked as a government minister because her "Muslimness was raised as an issue”. 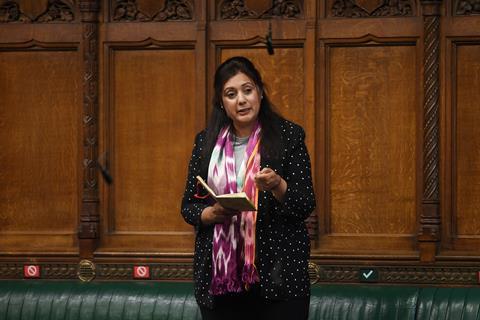 I’ve known Nusrat Ghani, the MP for Wealden in Sussex who claims she lost her job in 2020 because her “Muslimness was an issue”, as a good friend for more than 20 years. Joyfully, she married a colleague of mine at a firm I was running in 2002. I recall a lovely party (remember them? I only ask because other Tories seem to struggle to do so) aboard a moored ship on London’s Victoria Embankment.

The first thing to say is that Nus is not a liar. I suppose one is always inclined to say these things about a friend, but I don’t think she’d know how to lie, which was always bound to limit her career in today’s Conservative Party. Government chief whip Mark Spencer, by way of illustration, calls her allegations “completely false”. Only one of them can be telling the truth and I know who my money’s on.

When she stood for Wealden in the 2015 general election, she asked us if she might hold a reception for local voters. Nus is economically right-wing and socially liberal, so we don’t agree on much politically, but we were delighted to host her and her party at our home (in the interests of BBC-style impartiality, I subsequently hosted the Labour candidate too).

A delightful piece of providence is that our parish church is in her constituency, but our home is just outside it. So we laugh that I can lobby her as one of her vicars, but don’t have to vote for her.

She and her family also came to church on Easter Sunday. I remember that in a very quiet moment, just before we distributed communion at the altar rail, her daughter Farah, who must have been about nine, proclaimed loudly in their pew: “Mummy, we can’t go up because we’re Muslims.”

One lady of the parish told me after Nus was elected: “She never told us she was a Muslim.” Honestly, what? Look at her. She was born in Kashmir and raised in a working-class home in Birmingham. Did she really need to break the news to these Tory worthies that she was a Muslim?

There is worse, but I won’t go into it here, because it might encourage others. So, yes, here in deepest-blue, rural East Sussex, Islamophobia is a real issue for Conservatives. It really is the equivalent of our parents’ generation of casual antisemitism in the 1930s, with their grotesque dinner-table talk of “those Jews” (again, it was much worse than that and I’m not turning over that stone).

So the Conservative Party must deal with its Islamophobia, as Labour has been forced to deal with its antisemitism. But my purpose here is not so much to claim that Tories, especially rural ones, have a problem with institutional racism against Muslims, which is a fairly obvious observation, but that this means they have a very real problem with our state-established Christian faith too.

When the Queen, as supreme governor of the Church of England, came to Lambeth Palace in 2012 as part of her Diamond Jubilee celebrations and as guest of the Archbishop of Canterbury (or is it the other way round?), she was faced with representatives of nine major religious traditions in her audience. She had this to say:

“… we should remind ourselves of the significant position of the Church of England in our nation’s life. The concept of our established Church is occasionally misunderstood and, I believe, commonly under-appreciated. Its role is not to defend Anglicanism to the exclusion of other religions. Instead, the Church has a duty to protect the free practice of all faiths in this country… gently and assuredly, the Church of England has created an environment for other faith communities and indeed people of no faith to live freely.”

In short, the Queen gets it. A Christian country properly defends all its citizens, of all faiths and none. Such Christian regimes, then, differ markedly from entirely secular states, which may try to drive all religious faith from the public square; witness China – and that’s before we get to totalitarian atrocities of the twentieth century.

A Christian country properly defends all its citizens, of all faiths and none

The Queen also understands what it is to live a self-sacrificial life in service of the nation. And, in doing so, to set an example, such as refraining from birthday parties during pandemic lockdown, because she obeys the law of the land.

Her government provides something of a contrast. Self-indulgent and apparently above the law, “led” by a prime minister who is so contemptuous of those of minority faiths that he endangers women in Islamic dress by writing publicly that they look like “letter-boxes” and “bank-robbers”.

The government’s problem with religion is not just that it has a surfeit of Islamophobia. It’s also that it has a deep deficit of Christianity.