Natural disasters: can we still trust the sovereignty of God?

The tornados in Kentucky remind us that life is fragile and none of us know how long we may have. But amid the widespread devastation, RT Kendall says God’s purposes are still good, and the Church must be ready to greet him 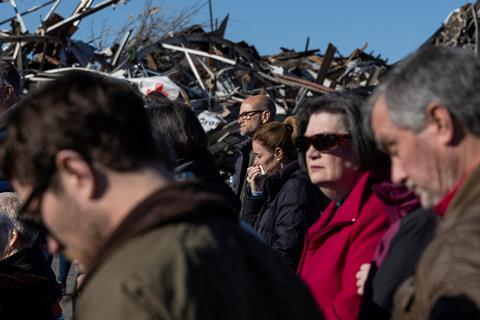 Local residents take part in an outdoor Sunday service in the aftermath of a tornado in Mayfield, Kentucky, U.S

Early last Saturday morning, while it was still dark outside, I was awakened by the eerie sound of tornado warnings. We get these all the time here in Nashville, and I consider them ‘routine’ warnings now; no one knew that, this time, they were the harbinger of something most horrible. Until recently, tornados came to our area mostly in the springtime, usually from March to June. But these days, we have learned to expect them all year round.

Many Christians naturally cry out: “Why God do you allow such a thing as this?”

I managed to get back to sleep, but when I got up and turned on the television, news of deadly tornados in Bowling Green, Kentucky - some fifty or sixty miles north of us - began to emerge. It was reported that over seventy people, including children, were killed during the night. Many had lost their homes, were taken to hospital, or had been isolated by fallen trees or the loss of electricity. Hundreds of millions of dollars’ worth of damage was done to property. As of Monday, over a hundred Kentucky residents were still unaccounted for. The tornado was so powerful that it lifted 27 train cars off the tracks in Erlington, Kentucky and scattered them across a field. Those who were there described the tornados as sounding like a freight train.

In daylight, one can see the funnel clouds of an approaching tornado and possibly get out of the way in time. But these tornados – apparently a dozen or more – came in the middle of the night while most people were asleep. They lasted the longest and covered the largest area in history. President Biden has declared a state of emergency, meaning federal funds will be made available to those in financial trouble.

When I retired from Westminster Chapel, London, we moved to Florida. There, we lived through several hurricanes. Later, we moved to Tennessee, partly to escape those hurricanes. There are no hurricane dangers in Tennessee – only hard rains that come from the aftermath of them hitting places like New Orleans. But we didn’t think about the tornados, and now, having lived through both, it is hard to say which is worse.

Hurricanes come with advance warning. You can leave an area entirely or board up your windows and stock up on groceries for when the electricity goes out. With tornados, you get warnings only hours in advance – sometimes less than an hour! The force of the winds is much stronger, the path usually much narrower. If it comes in the night, the situation is far scarier. All you can do is get to the basement or lie on a floor, away from windows, until the danger passes. Often, as in this weekend, you are helpless no matter where you are positioned.

There is a similarity between the geography of the American Tornado Belt and the Bible Belt. Both are spread roughly from Oklahoma to South Carolina. Both have their origin in the realm of God’s sovereignty. It is a mystery why a gracious and powerful God would allow such a horrible thing as deadly hurricanes and tornados. It is also a mystery – but a blessing - that God would bring a Great Awakening in New England in the 18th Century and the Cane Ridge Revival in Kentucky in the early 19th Century – and not more often. These awakenings are, without doubt, the main reason that there is a Bible Belt in America.

When a tornado kills loved ones and destroys homes, many Christians naturally cry out: “Why God do you allow such a thing as this?” That said, large numbers of people flooded to churches in Kentucky last Sunday following these disasters to demonstrate that their faith will not be deterred.

If politicians can seize upon recent weather disasters to voice their views on global warming, allow me to give my thoughts. The Bible gives warnings of the coming day of the Lord. Jesus warned of not being ready for his coming. He gave a parable of how the bridegroom tarried and the Church (called virgins) were asleep (Matthew 25:1-13). At midnight (the Greek word used means “middle of night”) a cry was made: “The bridegroom comes”. It woke up the entire Church. Some were ready (called wise virgins), some were not (called foolish virgins). I have long suspected that the best description of the modern Church is that we are asleep, not ready for the arrival of the bridegroom (Christ). However, we often don’t fully realise that we are asleep until we wake up.

Let us pray for those who have been severely hurt in the recent tornados – whether they have lost loved ones or property. I ask too that we pray for the Church generally that we will not forget the warnings of Jesus regarding his coming.