The surprise of Christmas

Into the darkness of Galilee a great light came. RT Kendall wonders if we could be on the cusp of our own revival this Christmas 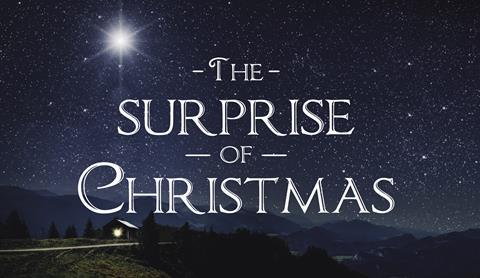 In 1742, having just arrived in Newcastle, John Wesley wrote in his journal: “I walked into the town. I was surprised: so much drunkenness, cursing and swearing, even from the mouths of little children, do I never remember to have seen and heard before, in so small a compass of time. Surely this place is ripe for Him who came ‘not to call the righteous, but sinners to repentance’.”

Ripe for revival. That was Wesley’s way of viewing Newcastle. Some may suppose that the worst possible conditions mean that revival is more remote than ever. But no. It is the other way around. Historic revival soon followed Wesley’s visit to Newcastle.

“The fullness of time” (Galatians 4:4, ESV) – when the “Word became flesh” (John 1:14) – came when conditions were the darkest. Israel was in an extremely backslidden condition. The most religious of them all, the Pharisees, had no desire whatsoever to “seek the glory that comes from the only God” (John 5:44). It was as if God waited until all seemed beyond hope to step in. God is like that. It is just his style. Not only choosing an unlikely time but also the most unlikely place – Galilee. Isaiah was the first to see it coming: “The people who walked in darkness have seen a great light; those who dwelt in a land of deep darkness, on them has light shone” (Isaiah 9:2, ESV).

That is why Matthew quoted Isaiah as he did: “those dwelling in the region and shadow of death, on them has a light dawned” (Matthew 4:16, ESV). It was the common perception in Israel that no one expected anything good to come out of Nazareth (John 1:46). And since a man from Galilee was preaching: “Repent, for the kingdom of heaven is at hand” and “healing every disease and every affliction” in Capernaum (Matthew 4:17,23), a prophetic explanation was appropriate.

This was God’s plan all along. He picks the time, the place and the people he chooses to put on the map. A new pecking order was on the horizon. The religious leaders of Jerusalem felt only disdain for the people up north in Nazareth and Capernaum – the territory of Zebulun and Naphtali. “Darkness” was the way this part of Israel was regarded. The “Galilee of the Gentiles” was only a few miles from Lebanon and Syria. It was assumed that Jerusalem was God’s most cherished focus, that whatever hope there was would be centred in Jerusalem. It was assumed that Galilee was dark, that Jerusalem was light.

The Pharisees and Sadducees had a lot to learn, namely, that their hearts were as dark as those of the people living in Galilee. Indeed, Jesus said that all people love “darkness rather than…light because their works were evil” (John 3:19). We all were born dead and in sin (Ephesians 2:1).

It was as if God waited until all seemed beyond hope to step in. God is like that. It is just his style

There are two ways to grasp the word darkness: outwardly and inwardly. The land of “deep darkness” – outwardly – was the way the Jews generally regarded the northern part of Israel. The closer people lived to the border with the Gentiles – thus further from Jerusalem – the more ignorant and unqualified they were assumed to be. Therefore, no one expected anything hopeful or helpful to come out of such a place. To the Jews of those days – and to many people today – conditions determine one’s ability to demonstrate goodness. Jesus, however, showed that sin is internal; that it is what comes out of a person’s heart – “evil thoughts – murder, adultery [and] sexual immorality” (Matthew 15:19). Therefore true righteousness is also inward, as in loving your enemy and dealing with lust in your heart (Matthew 5:44, 29).

Galilee’s darkness was not due to its proximity to Gentile borders, but because of Israel’s fear and prejudice towards it. The darkness was not outward but inward. It was unthinkable that this land of darkness would produce Israel’s Messiah. And yet the people dwelling “in darkness have seen a great light” (Isaiah 9:2). How bright? Very bright, as it is the light that gives light to everyone (John 1:9), the “light of the world” (John 8:12) and the one in whom there is “no darkness at all” (1 John 1:5).

This also meant a new pecking order had arrived. Jews then not only hated Jesus for what he said (his view of sin and righteousness), and what he did (choosing fishermen, tax collectors and sinners); they were prejudiced also because of where he was from. Two Galileans – Peter and John – became the chief spokespeople for the gospel of Jesus Christ. Saul of Tarsus became the chief theologian. The Pharisees and Sadducees who had rejected the cornerstone would be put out of the picture (Acts 4:11).

The situation today – in Britain and also in America – is much like that of ancient Israel 2,000 years ago. The setting is dark. How dark? Very dark. It may seem that people are less interested in God than ever before. Fewer go to church. Islam is growing faster than Christianity in Britain. Not very long ago the majority in America believed that Jesus was the only way to God. Today 52 per cent believe that Jesus was only a great teacher – but nothing more.

Since Covid-19, many who attended church are gone; more are uncommitted. The outrage concerning the ever-growing number of abortions has long evaporated. Prejudice regarding the colour of one’s skin is much worse in America, but still exists in the United Kingdom too. Violence in our cities no longer surprises anyone. Theological liberalism in pulpits has become normal. The Great Reformation of the 16th Century is regarded by many as the Great Mistake. Apart from welcome exceptions such as the Alpha course, the need and urgency to see people converted to Jesus Christ is non-existent in much of the Church.

But there is hope. That was the surprise of the first Christmas. God bypassed the religious hierarchy in Jerusalem and revealed his glory to shepherds. So, too, do all of us need to be reminded of a great light. How bright? Very bright. It is the glory of the eternal gospel. We were born dead in our sins. But “God…rich in mercy”, saved us (Ephesians 2:4-5). The light that caused Saul of Tarsus to fall to the ground is “the same yesterday and today and for ever” (Hebrews 13:8). The same God who sent Jesus in the fullness of time is still in control. Never have conditions been worse. We are ripe for revival.