​I think Christians should have the jab. But it bothers me how governments are forcing their citizens into it

In parts of Europe some citizens who haven’t been vaccinated are being issued with fines. Graham Nicholls is concerned we are establishing a dangerous precedent that allows governments to prosecute those who refuse to take certain medicines. 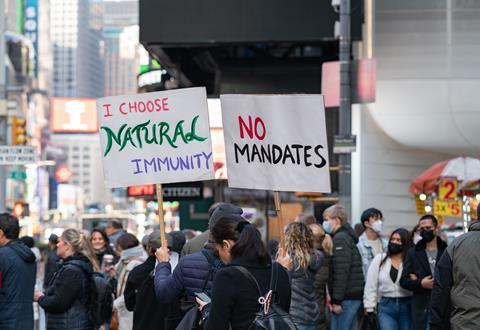 Austria, Germany, and Greece are leading the way in a new wave of lockdowns with the added twist of targeting the unvaccinated.

In Germany you will be banned from hospitality and leisure activities if you haven’t had the jab.

Right across the continent there are protests – Italy is now in its 20th consecutive week of anti-restriction protests. Should we in the UK be protesting too? Right now we live under fairly light restrictions, but we watch and wait to see how our own government responds to our neighbours and ponders how to contain the Omicron variant.

I can see why governments may want to put in place these targeted restrictions – to encourage more people to get vaccinated – but I am also very uneasy about politicians essentially turning the unvaccinated into outcasts, and what this means for social cohesion and freedom of conscience.

Vaccination seems to be a good thing to encourage, and personally, I am positive about people getting vaccinated. I think this makes sense for taking care of ourselves and is the responsible thing to do.

The Apostle Paul writes to the Romans, instructing "every person be subject to the governing authorities. For there is no authority except from God, and those that exist have been instituted by God. Therefore whoever resists the authorities resists what God has appointed, and those who resist will incur judgement.” (Romans 13:1-2 ESV)

Governments bring with them a corporate responsibility and we see humans flourish in a context of order and cooperation. While we also acknowledge that governments are made up of fallen individuals who make bad decisions, as Christians we want to encourage honour and respect toward the ones God has instituted to have authority over us.

Freedom of conscience and opinion

But at the same time, we also have a high view of freedom of conscience. We respect those who – for a wide range of reasons, some ethical, some medical – choose to not be vaccinated. And I don’t see why they should be penalised. Some of these are Christian brothers and sisters who are concerned about the cell line used for vaccine development. Some are citizens who on a matter of principle do not want to take the vaccine themselves, or to support the mandating of vaccines.

Is it wise for governments to go into battle with their own people, backing the unvaccinated into a corner which will likely lead to more unrest and revolt. Since the start of the pandemic so called ‘anti-vaxxers’ have been telling the world that this kind of compulsion would happen – that governments would restrict their citizens based on their vaccination status – and now it is.

Should governments be effectively forcing its citizens to undergo a medical procedure and where does this lead?

I realise that for some professions certain vaccinations are required, as they are to enter some countries, but both those cases leaves options for the individual.

Once you have established the precedent that governments can prosecute those who refuse to take a certain medicine, it can easily extend to all kinds of treatments that the state decides are for the common good.

Today it might be something we are not that concerned about as Christians… but what might it be next time? What if the government decides to force you to abort a baby because it might have disabilities, or will not have economic support from its parents? What about forcing you to euthanise an elderly relative because they are becoming a burden on the taxpayer’s scarce resources? Or what about a prison term for the overweight?

These might seen like very remote possibilities, and I’m not suggesting it’s time to break out the barricades yet. But even a year ago, could we have imagined that Western governments (not communist China) would be using the law to force its citizens to get the jab?

Medicine is a good gift of God’s common grace but as Christians who want the best for our fellow citizens, I do not believe we should support the state legislating our medicating.