Franklin Graham is speculating in his end times tweet to Boris Johnson. No one knows when Jesus will return

Franklin Graham has responded to Boris Johnson’s words on climate change by suggesting that God’s judgement is imminent. But no-one knows when Jesus will return, and Christians have got their end times theology badly wrong in the past, says Martyn Whittock 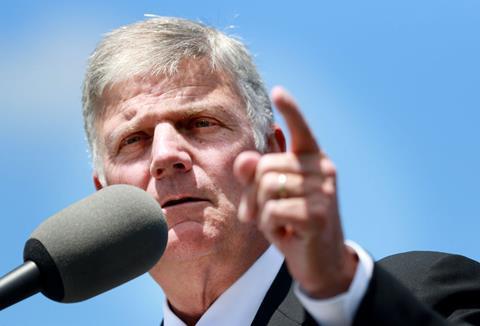 Graham may be correct. Since no one knows the time of Christ’s return to judge the earth, it is possible that it may be imminent. On the other hand, it may not be. For 2,000 years, Christians have ignored the scriptural injunctions not to speculate on the matter of Christ’s return. Jesus clearly taught: “But about that day and hour no one knows, neither the angels of heaven, nor the Son, but only the Father” (Matthew 24:36, NRSV). Since his followers clearly did not taken this on board, he repeated it: “It is not for you to know the times or dates the Father has set by his own authority” (Acts 1:7). Despite this, Christians have repeatedly claimed that they are living in the ‘end times.’

To be fair to Graham, he concluded his Facebook post with: “No man knows the day or the hour…” However, he then returned to end-times speculation: “but I believe we are getting close.”

As a historian, I kept coming across erroneous claims to do with the end times. For some believers, it was the Vikings who were the harbingers of the end. To others, it was the wars of the crusades. To yet others the Black Death, the Reformation conflicts or the cold war. Covid-19 has caused similar views to resurface, and has even led to some refusing to heed public health advice in a time of pandemic. Graham stands in a long line of those who were/are certain that “we’re one minute to midnight.” So far, all have been wrong.

This realisation recently caused me to write a book which explores the history of end-times beliefs and speculation: The End Times, Again? 2000 Years of the Use and Misuse of Biblical Prophecy. As an evangelical Christian who believes in the Second Coming, I am astonished by the track record of error with regard to predicting it. After the failure of each prediction, each generation dusts itself down and then does more of the same. It is as if the scriptural injunctions do not exist.

So how should we assess Graham’s statement? On the one hand, it may (even if incorrect) prompt some people to respond to God’s message of salvation. That, of course, is a good thing – even if it turns out that this is not the end-times generation.

And there we have the problem. As is so often the case with those who are deeply embedded in end times speculation, this tends to encourage passivity in the face of current global challenges. To many, Graham’s Facebook post may read as an out-and-out denial of the current global crisis. It seems to totally disregard the evidence that indicates human-caused global warming is a reality. And this refusal to accept the facts is intertwined with Graham’s eschatology.

Since no one knows the time of Christ’s return, it is possible that it may be imminent. On the other hand, it may not be

Graham also took to Facebook recently to protest against current US energy policy, saying: “President Biden wants to shut down another pipeline? Can you believe this - with gasoline prices already the highest they’ve been in years?” It is difficult to interpret this other than that the (politically conservative) evangelical right in the USA is committed to the petrochemical industry, and does not take kindly to the criticisms of it that are inherent in taking climate change seriously. In short, it looks like there is more than eschatology behind Graham’s climate change denial, there is a whole politically-conservative world view in the background. That is not to question the sincerity of his end-times beliefs. It is merely to suggest that these may have been coloured by his political ideology. My studies show that this is frequently the case in end-times speculations over the centuries. It raises the question: Are we allowing our own political prejudices and biases to colour our interpretation of scripture?

So, how should we respond?

Firstly, do not let speculation about the imminence of the end times create a mood of passivity in the face of global crises. Secondly, while looking forward to a new heaven and earth, keep on caring for the one we have now. Thirdly, be aware of political ideologies that are, arguably, behind a significant amount of end-times speculation. Finally, preach the gospel and leave the timing of the Second Coming to God.

Martyn WhittockMartyn Whittock is a Licensed Lay Minister in the Church of England. As an historian and author, or co-author, of fifty-four books, his work covers a wide range of historical and theological themes. As a commentator and columnist, he has written for a number of print and online news platforms; been interviewed on radio shows exploring the interaction of faith and politics; appeared on Sky News discussing political events in the USA; and been interviewed on a number of news platforms regarding the Russian invasion of Ukraine.