Don't be offended by the M&S 'pigmas' cards. Get on with proclaiming the good news instead

We shouldn’t be taken aback that Christ is being airbrished out of Christmas, says James Mildred. But the future of Christianity is God’s business. Ours is to share the good news and show the love of Jesus 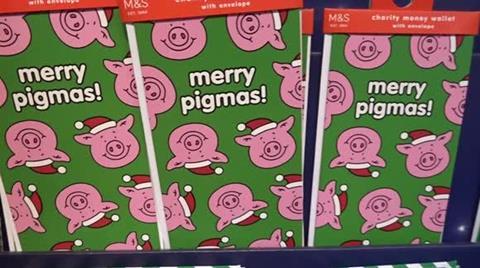 A few years ago, a survey showed that less than one per cent of Christmas cards had religious themes. While stores displayed hundreds of different options, only a handful featured the traditional Christian nativity. Morrisons was the worst offender. Second worst was Tesco.

This year, Marks and Spencer have caused anger with their Percy Pig-themed charity Christmas cards and money wallets, which replaced the world ‘Christmas’ with ‘Pigmas’. Author Laura Jansson took to Twitter to complain, asking whether M&S would replace the name of another religion’s prophet with ‘pig’ for a laugh.

Thankfully, the future of Christianity does not rest on inaccurate portrayals of ‘traditional’ nativity scenes

Personally, I’m not that bothered if M&S choose to replace the word Christmas with any word they choose. As a festival, there’s evidence that it has more to do with paganism than true, biblical Christianity. Moreover, Christmas today is as consumerist as it gets. It’s far more about what you can get than what you can give.

That said, if you were to ask me whether I think Christmas is being airbrushed of any actual Christian content, I’d say yes! But why should we be surprised by that? It’s simply a reflection of where we are as a society. I don’t think we’re a Christian nation any more, and we haven’t been for some time. Yes, our identity and culture have been indisputably shaped by Christian teaching. And there are still remnants of it left, like prayers in the House of Commons before official business starts, but we have decidedly turned our backs on God. The commercialisation and ‘de-Christianisation’ of Christmas are simply symptoms of a much deeper illness. We’re now swimming in very dark waters. God’s word tells us that when a society gives up on God, as an act of judgement, God gives it over “to do what should not be done” (Romans 1:28).

The New Testament does not promise religious liberty. Jesus told us that persecution would come

I must admit, the point that Laura raises about whether suppliers and supermarkets would dare to insult the central figure of another religion is a good one. Think about how often Christ’s name is openly blasphemed on TV shows. Nothing is ever done about the offence this causes Christians but equal insults aimed at Allah or Mohammed would never be tolerated. There’s an absolute double standard at play. Christianity is considered fair game.

Tragically, this Christmas time, there will be hundreds of thousands who suffer. Some will have no electricity or heating. Some will have no one to give them any gifts. Some will be in hospital or suffering because routine operations have been cancelled. In response, many churches and Christians will be busier than ever, reaching out, holding carol services, doing mercy ministries, offering hospitality, food, comfort, and hope to a weary and watching world. That’s real Christianity in action.

Thankfully, the future of Christianity does not rest on inaccurate portrayals of ‘traditional’ nativity scenes on Christmas cards that are often more the product of human imagination than fact. The future of Christianity is, ultimately, God’s business. It is far better that we get on with proclaiming the good news, being salt and light and demonstrating the love of Christ in a whole variety of ways - and do so with profound thankfulness that for all the pressures, we are still remarkably free to preach Christ.

The New Testament does not promise religious liberty. Jesus told us that persecution would come. So let’s not lose too much sleep over M&S Christmas cards and instead get on with the work God has put in front of us.