Do the Tory candidates have no shame?

Many of the contenders are responsible for the alleged policy atrocities they now decry, argues George Pitcher, as he conducts an exegesis on the term ‘shame’ 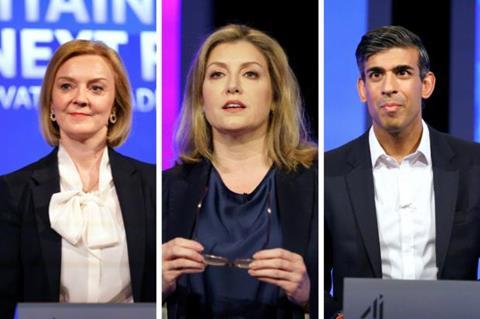 As is appropriate in these non-binary, gender-fluid times of which (irony trigger-warning) the Conservatives are so fond, only the pronouns change. Has/have he/she/it/they no shame? This is the walk of shame to the prize of Tory leadership, but along the way the contestants form a circular firing squad, telling each other that they should be ashamed of themselves for erstwhile policy errors.

Almost without exception, these contenders are responsible for the alleged policy atrocities they now decry. Their various defences often fall one step short of the claim that they were only following orders (loyalty to cabinet consensus and all that).

The origin of that phrase is distasteful and I won’t pursue it – but Boris Johnson, who remains at the time of writing prime minister, must wonder what cultic mass conversion has gripped the nodding dogs that surrounded his cabinet table for two wretched years.

Shame on them. But what is this shame of which we so easily speak? In psychotherapy, shame is frequently depicted as like a see-saw; when you’re down you feel shamed and need to push up, at the expense of whoever is sitting at the other end and has put you down. Shaming them is what schadenfreude is all about: Fulfilling one’s own self-esteem.

That becomes more complicated when we address clinical narcissism. Boris Johnson has been regularly accused in a casual way of being a narcissist – as in someone who believes he is exceptional – but it’s worth also considering the medical definition.

Narcissistic personality disorder (NPD) presents as a mental disorder characterised by a life-long pattern of exaggerated feeling of self-importance, an excessive need for admiration, and a diminished ability to empathise with the feelings of others.

Thinking of Johnson, you may like to insert your own choice of shrug emoji at this point – or perhaps just hold in mind a mental image of Donald Trump. That Johnson feels no shame about his rampage of political and social chaos is symptomatic of a subset of NPD, which is grandiose, arrogant, thick-skinned and oblivious of the effects of these traits on other people. This subset presents solely for the admiration and/or envy of others.

Clearly that is not a healthy condition for anyone. For a prime minister it is downright dangerous. Johnson obviously needs help. In the first instance, with the removal of his furniture from No.10.

To call out politicians for their arrogance is only to address the presented symptoms rather than their cause: Shame

So shame is a debilitating mental condition, in that it can generate these compensatory factors. But, in theological terms, shame is rather different. It’s still as debilitating as a human burden, but it’s outcomes, at least in the Christian story, are rather more productive than ruining the integrity of the nation’s highest public office.

The German Lutheran theologian Dietrich Bonhoeffer wrote: “Shame is man’s ineffaceable recollection of his estrangement from the origin; it is grief for this estrangement, and the powerless longing to return to unity with the origin. Man is ashamed because he has lost something which is essential to his original character, to himself as a whole; he is ashamed of his nakedness.”

The latter phrases of that are lapsarian. Adam and Eve, in the creation fable, became ashamed of their nakedness and humanity departed from its origin (Genesis 2:4-3:24). As Joni Mitchell sang in 1969, we’ve got to get ourselves back to the garden.

In that endeavour, the Church has much to teach politics. The Christian narrative is steeped in shame, but covers it not with grandiosity and self-importance, but redeems it with something infinitely more transformative. Jesus of Nazareth’s nakedness on the cross echoes the humiliation of Adam and Eve, but the outcomes are somewhat different.

This is partly kenotic theology: The divine empties itself of its divinity to share the humiliation of humanity, “obedient to death, even death on a cross.” (Philippians 2:7-9)

And it is partly about despising shame itself, rather than the evasive tactics that spawn NPD: “For the joy set before him he endured the cross, scorning its shame.” (Hebrews 12:2). This is shame put to rout, rather than festering and concealed by avoidance behaviours, kicking off the ground on the see-saw to make yourself feel higher and more superior to those who might have put you down.

This, admittedly, is exegesis as mental therapy. But why not? For a start, the practice of mindfulness is only another term for prayer. Further than that, to call out politicians for their arrogance, self-entitlement and displays of exceptionalism is only to address the presented symptoms rather than their cause: Shame.

For those scrabbling to succeed Johnson as PM, that shame may well be rooted in their co-morbidities with the chaos and ineptitude of his premiership over the past couple of years. For Johnson himself, one can only speculate, fruitlessly and perhaps presumptuously, on the causes of his shame.

But unless they confront and own that shame, nothing is going to get better – for them or the people they govern. They won’t, of course – because politics doesn’t yet work like that. Which is a shame.