Much like our current leaders, Israel’s King Ahab preferred advisors to echo his own opinions rather than give him godly challenge. Now, like then, it’s likely to end in disaster, warns George Pitcher 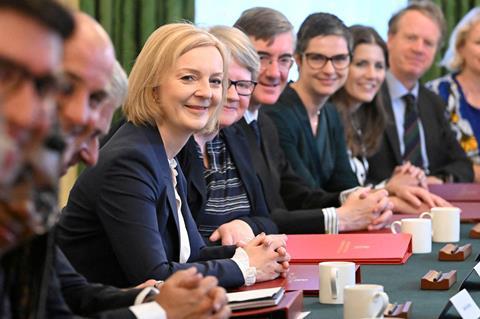 This will come as no surprise to those who read it regularly, but sometimes ancient scripture chimes just perfectly with what’s happening around us today.

When it happens, it makes me smile. It can be a line from a psalm: “I was envious of the proud; I saw the wicked in such prosperity” (Psalm 73:3) or a gospel injunction: “Whatever you did for the least of these brothers and sisters of mine, you did for me” (Matthew 25:40) which speaks directly (and pretty unequivocally) to the UK government’s recent train-crash economic policy.

This week in the Anglican lectionary, the reading comes from 1 Kings 22. In it, the King of Judah, Jehoshaphat, is making common cause with Ahab, the King of Israel, to throw occupiers out of an area called Ramoth-Gilead, which has been annexed by King Aram (rather as Vladimir Putin has tried to annexe eastern Ukraine).

Like John the Baptist, we are voices crying out in the wilderness

Israel’s Ahab is in the habit of consulting his prophets about this sort of thing, so he summons a bunch of them – 400 in all – and they all tell him it’s a terrifically good idea, that God will deliver him what he wants and he should get on with it. Jehoshaphat asks if there’s any contrary opinion. Ahab says there’s a chap called Micaiah, but he hates him because he’s always predicting disaster.

Jehoshaphat, in a fit of BBC-style impartiality, insists he is called. Micaiah delivers some good news: Ramoth-Gilead will indeed be won. But Israel’s people will be scattered and Ahab will be killed. “See?” says Ahab to Jehoshaphat (I paraphrase), “he always gives me bad vibes.” Micaiah, who is attacked by the rest of the prophets who simply tell the king what he wants to hear, responds: “Like it or lump it” (more or less). So they go into battle and, of course, Micaiah’s prediction comes true.

By now, you’ll have seen where this is going. Recent UK governments – certainly those of Boris Johnson and the current prime minister, Liz Truss – have listened to a cabal of those who tell them what they want to hear. They ignore, or even ostracise, those of a different opinion, regardless of whether they may well be right. In some cases, these cabals are quite small – one thinks of Johnson and the Cummings clique – or rather bigger, such as the European Research Group and the right-wing of the Tory party, which might represent the kind of number that King Ahab was guided by.

In the case of Truss, many of those voices will have similar motivations to Ahab’s sycophantic counsellors – they want to keep their jobs, be treated favourably and have their way, whatever the consequences. As such, they are enablers of the disastrous economic folly perpetrated by Truss and her chancellor, Kwasi Kwarteng, just as much as the 400 prophets who sent Ahab into battle.

Micaiah speaks truth to power, which is an altogether more demanding and respectable position. To that sort of behaviour Ahab, like Truss, responds that he is not “one of us” – which, in Truss’s case, means someone who helped to get her elected and tells her what she wants to hear. That’s why real experience and talent, such as that of Michael Gove and Rishi Sunak, are missing from the government benches, just as Johnson’s cabinet was stuffed with seventh-raters whose only purpose was to back him blindly.

But Micaiah serves to set a further example beyond simply telling the truth. Until some time after the second world war, the spiritual and ethical consensus of the UK was a Christian one. So it was customary for political policy to be at least informed by the faith of our national Church, established in law, with its principal and principled bishops sitting in the upper house of our legislature.

Now, we are constantly told, we live in a secular society. This doesn’t have its original Enlightenment meaning, of a society in which everyone is treated equally under the law, but that the law should be framed exclusively by the ungodly and the unchurched.

Jehoshaphat, in a fit of BBC-style impartiality, insists Micaiah is called

Whatever one’s opinion on this development – whether one cheers or prays in response to it – it means that those of a Christian faith, in power or not, are likely to have become a Micaiah, rather than one of the overwhelming consensus who are motivated by their own self-interests. This puts the words of the psalm, with which I opened this column, directly into our mouths.

The only way we can respond is with the kind of gospel exhortation with which I counterbalanced that psalm verse. But let’s not fool ourselves. Like John the Baptist, we are now voices crying out in the wilderness (John 1:23) rather than a majority Church guiding its people through their parliament. We’re all Micaiah now.