As Liz Truss resigns, Christians must avoid being dragged into the soap opera of heroes and villains

At times like these, Christians need to look at the roots of the issue, namely relationships and truth. Most of all, we need to pray, says Andy Flannagan 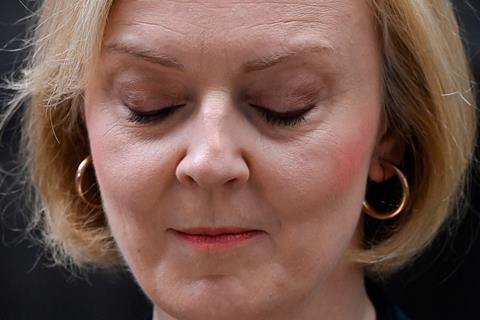 Personalities. That’s what the media want to focus our collective attention on. But we must resist this temptation to create pantomime villains and comic heroes.

Coverage is already resembling sports commentary more than any sort of meaningful analysis of how and why we have got to this place.

As we were shown opinion polls and profiles of the ‘runners and riders’, it was remarkable yesterday how unremarkable it felt to hear the news of the resignation of another Prime Minister.

Chaos has been normalised. There are surely many books that will be written about this decade of UK and world history, but here are my two key takeaways: what values should underpin a Christian understanding of leadership? And what do we lose when they are deconstructed?

If the very nature of God is set in relationship between the Father, Son and Holy Spirit, and we are made in their image, then close relationships must be key to how we operate best as human beings. Perhaps, in fact, the kingdom never moves faster than the speed of relationships. It may be possible to make change happen faster, but it may not be kingdom change.

There is a history of ‘mediating bodies’ between leaders and the populous. They are entities that we trust to interpret and interrogate what leaders are saying. These are people that have some expertise in one field or another – bodies such as the General Medical Council, churches, universities, co-operatives, guilds, unions or trusted journalistic bodies. We all have a limited amount of time and energy to give to understanding the big issues of the day, so we listen to people we trust and have some degree of relationship with to help us make sense of it all.

The Church is doing an incredible job of treating the victims of a sick system, but we cannot spend the next 50 years as the nation’s paramedic

But in the new social media-driven world, this way of working is being abandoned. Anyone with a computer can share (with speed and no time for reflection) their unbridled wisdom with the world. As has been shown by Donald Trump on Twitter, once you have a direct line to people, unfiltered by these mediating bodies, you can pretty much say whatever you want - and if it feels true to them, people will love it and believe it. You can bypass all those bodies who might question the veracity of what you say, or have some experience of addressing the issues before. We all desire the world to be as we would script it, and when someone validates our script, we embrace it and share it, rarely stopping to question whether it is actually true.

There is an acute dislocation of real relationship, as these bodies are bludgeoned out of the way. Instead we receive our information from people we will never have a real conversation with. We cannot assess their character or skills.

In the last decade, this dislocation has been mirrored in the UK with regard to the selection of political leaders. Devolving more power to the party members felt like bringing power closer to the people. But the people who really know the character, skillset and potential of a new leader are the colleagues with whom they work every day. They are best placed to know who could do the incredibly complex job of leading a party and a country.

Giving ‘power to the people’ has resulted in two ‘end-of-spectrum’ party leaders in Jeremy Corbyn and Liz Truss. I wouldn’t want to draw an equivalence in terms of their political integrity, but some would say that neither of them were able to lead a country as they occupied a space far from the centre of gravity of their party and the nation as a whole, and had skillsets unsuited to the role. Their colleagues knew this, but were powerless to stop it. Sadly, these type of leaders inevitably bring a decrease in quality and competence of cabinet/shadow cabinet members, as they often select from a small ideological pool rather than based on talent and experience. Dislocation matters.

The truth will out

Truth has a way of coming back to bite you, even when you have skilfully ignored it. If we believe in a creator, we believe that there is intelligent order in the cosmos. Incredibly, all things hold together in him, who has said that he is the truth. A husband can get away with lying to his wife for a long time, but history shows that eventually truth has a way of escaping from the sinful safes we try to lock it in.

The direct link between social media or agenda-laced fake journalism can maintain a fantasy for quite some time but, eventually, the truth escapes. People start dying of the ‘fake disease’ that is Covid-19. Markets reject fake economics.

The kingdom never moves faster than the speed of relationships

Academics like Professor Jonathan Haidt are looking at the findings of their research and wondering whether Western democracy as we know it can actually survive the social media age, or whether we are condemned to cycles of populism based on palpably false prospectuses. He quotes the statement of the 18 year-old who recently killed ten Black Americans at a supermarket in Buffalo. When asked where he got his current beliefs he said: “mostly from the internet. There was little to no influence on my personal beliefs by people I met in person.”

You have to feel for Liz Truss personally. All of us know the pain of failing at something we are passionate about, but to do that in the bright glare of public view and in such a short timeframe must make it so much worse.

Our prayers should be with her and the leaders of all the political parties in the UK, that some degree of order could come from this current chaos.

Let us not be drawn into the soap opera of personality politics. Let’s address the roots of the issue. What we are witnessing is the inevitable fruit of the degradation of truth and relationship in our public discourse. Those media operations that previously championed Liz Truss (and some questionable ideology) before turning on her have a lot of questions to answer. And for us as a people, can we bring ourselves to stop buying what they are selling?

The answer lies not just in us becoming more ethical consumers of politics – more discerning about what we read and believe – but in making the journey from consumers to participants. Democracy is an imperfect but beautiful and fragile thing that will only survive if we play our part.

The Church is doing an incredible job of treating the victims of a sick system, but we cannot spend the next 50 years as the nation’s paramedic. We need to fulfil our prophetic as well as our pastoral role. Hold your nose, and get stuck in, in relationships and in truth. Jesus did.