As a Christian man I know my role is to protect my family, but Will Smith was wrong to resort to violence

Christian men should be protective of their families, but we must not imitate the world’s methods. Jesus shows us a much better way, argues Carl Beech 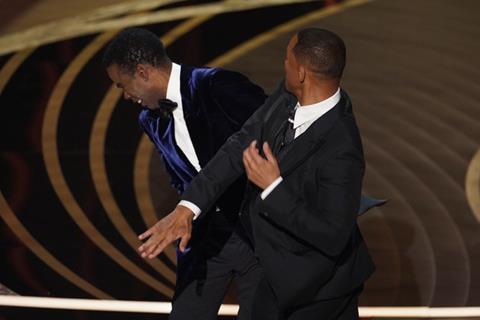 If you haven’t already heard, actor Will Smith, in response to a poor and hurtful joke, slapped comedian Chris Rock in front of millions of people last night at the Oscars.

Angrily marching back to his chair, Smith then shouted, with the odd expletive, that Rock should keep his wife’s name out of his mouth.

Later that evening Smith won an Oscar and declared in his speech, through tears, that he was “being called on in my life to love people”.

Was Smith justified in his violent reaction? No. But that didn’t stop Liam Payne of One Direction defending him: “I believe whatever [Smith] felt that he did, he had the right to do it,” he told an interviewer after the event.

Welcome to the weird and toxic world of Hollywood. What other working environment do you know where a colleague can be punched in the face and nothing is done about it?

Clearly emotions were high for Will Smith. He was waiting to find out if he had won an Oscar - one of only a small number awarded to black men for leading actor in many years. The joke was undoubtedly offensive. Rock’s comment – “Jada, can’t wait for GI Jane 2” – was in poor taste given that Smith’s wife has alopecia, which is why she keeps her hair short.

Having watched the slap, I asked myself: What’s my role as a man to my family when it comes to protecting them? As ever I’ll take my lead from the Bible - which tells me to love my wife like Christ loved the church (Ephesians 5:25). That means I’m asked to lay down my life.

Laying my life down for my family means apologising first, not abdicating responsibility and placing my own self interests below the needs of my family. It may also mean physically defending them or placing myself in harm’s way.

A Christian man must harness his testosterone and use it for good, not ill.

To the women who say to me – “that’s for all of us to do” I say, “that’s cool!” If we’re all trying to apologise first, wouldn’t life be better? However, the Bible does seem to place a particular call on men to be sacrificial. So, please women everywhere, don’t stop us from doing that! Because that’s the irony…unless my wife allows me to fulfil that sacrificial role, I can’t do it. That’s why we both humbly submit to one another, out of reverence for Christ.

Does this mean it’s ok to slap someone who belittles your wife? No.

Violence isn’t the way of Christ. There are other ways to deal with situations like this that have much more power. For example, Smith could have said from the stage when he won the award: “Chris you’re an amazing comedian and a friend, but I just want to honour my wife who displays such beauty and courage…etc.” Dignity, courage, restraint, strength and love have far more power than a slap.

We can protect by having an opposite spirit to the world. It takes courage and extreme discipline to exercise such restraint. It also takes strength. This is where our masculinity (and yes there is a broad spectrum of masculinity) can be at its best. Men produce on average, six times more testosterone than women. It affects us in all sorts of ways. It’s why we often see comments like “if women ruled the world we wouldn’t have wars.” Or most recently during the peace negotiations in Ukraine I saw social media posts along the lines of “Would the outcome be different if there were women around the table?” It’s why more men are in gangs and more men are in prison. It’s why men commit more violent crimes than women.

A Christian man must harness his testosterone and use it for good, not ill. We use our strength to protect the weak and stand against the abuse of power. Men need to learn how to harness their strength and instinctive desire to lash out. To do this we need more spiritual fathers, mature male role models and effective discipleship.

In my own life, we had to navigate a season where a close family member was being harmed. There were times I could have easily succumbed to hate – or used my anger to lash out. There was more power and healing, however, in taking a different and more dignified route.

Will Smith’s Oscar will always and forever be overshadowed by “that slap”. What could have been an incredible moment of triumph was blunted by allowing rage to get the better of him. As Denzel Washington reportedly told Smith: “Be careful at your highest moment…that’s when the devil comes for you.”

I can understand why Smith did it. But he was wrong. This isn’t how men are supposed to protect their loved ones (though to be clear, if we’re talking about an armed burglar breaking into your house that would be a very different matter…).

Smith is yet to apologise publicly to Rock or ask his forgiveness, which is something that would demonstrate considerable dignity and strength.

Jesus exercised power by laying his life down. He did it with nails through his hands and a crown of thorns on his head. He could have called on legions of angels with firepower the likes of which the world has never seen. But he didn’t. Let’s take our lead from him.