Angry about the lockdown? Here’s what you can do about it

We’re all frustrated by the delay to easing lockdown, says Tim Farron MP. But it’s how we respond that sets us apart as Christians 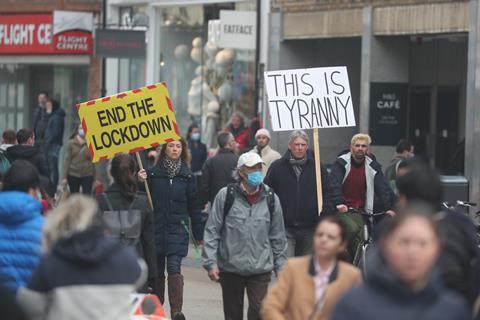 My Cumbrian constituency contains the Lake District and the Yorkshire Dales, teeming with tourism businesses for whom the continued restrictions seriously threaten their very survival. The hospitality and entertainment industry is desperate to get back to normal too, and then there’s everyone else who was just looking forward to more freedom.

As a Cumbrian, I am used to climbing mountains, reaching what I thought was the summit only to discover that there’s still further to go. It can break your spirit.

Maybe you are angry about the continuation of lockdown. But is that a right response for a Christian?

Anger is not a sin. Jesus showed anger towards the tax collectors in John 2. Anger is a justified response to injustice and other wrongs. In Ephesians 4:26 we are told: “In your anger do not sin: Do not let the sun go down while you are still angry,”. Anger can lead to bitterness, hatred, thoughts of revenge – so I think Paul is telling us to deal with anger wisely and not to let it fester or mutate. In 1 Peter 5:7, we are told to “cast all your anxiety on him because he cares for you.” It is a reminder that the healthiest, wisest thing to do with our more extreme emotions is to lay them before the Lord.

Put your confidence in the promises God made, not in those that he never did

We have the right - indeed we are encouraged - to let it all out in front of God. The book of Lamentations and the psalms of lament show that we do not have to keep a stiff upper lip before the Lord. Quite the opposite. In Psalm 6:3 the desperate plea “my soul is in deep anguish. How long Lord, how long?” feels shocking, yet it is also liberating. Tempting though it is to take to our keyboard and rattle out our anger for all the world to see, the wisest thing we can do is to take it before the Lord. He’s listening. He can take it, and he will answer.

Holding on to God

If we are angry, frustrated or deeply upset at this ongoing situation, might it be that we are holding God to promises that he never made? But let’s humbly hold him to two of the promises that he did make.

In James 1:5 we find: “If any of you lacks wisdom, you should ask God, who gives generously to all without finding fault, and it will be given to you.” When we experience anger, it is wisdom we need in order to deal with it – so when you lament before the Lord, ask for wisdom. He has promised it and he will give it.

And then, of course, in John 3:16 we find one of God’s most famous promises: “For God so loved the world that he gave his one and only Son, that whoever believes in him shall not perish but have eternal life.” I don’t think that many of us – me included – always live as though this is true. Maybe we are more like those whom James condemns for confidently planning for the future without reference to God’s will (James 4:13-17). So, sometimes, when our plans get up-ended, we are crushed - because our hope was placed in the wrong things.

The healthiest, wisest thing to do with our more extreme emotions is lay them before God

Put your confidence in the promises God has made and not in those that he never did. Bring your understandable anger to God and let him teach you the incredibly joy of trusting in him, even in a world in which he promised that we, as Christians, would have trouble.