Almost half the population believe in Jesus’ resurrection. It’s time for the Church to be bolder

Are more people open to the gospel than we think? A new report suggests they are. After a couple of years like no other, it’s time for the Church to believe in the good news of the gospel again, says Andy Kind, and start talking Jesus 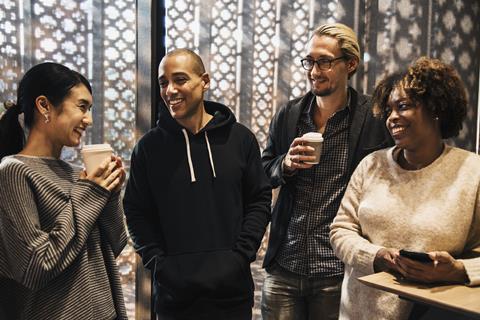 Yesterday, a new report on “the state of faith and perceptions of Jesus in the UK” was published. Perhaps the results of Talking Jesus will surprise you.

I wonder how you’re reacting to that. A cynical “No chance, mate!” or a heart-palpitating “Wow, come on!”

I have to say, while samples don’t always give the full picture - as anyone who has ever bought a carpet can testify - I allowed myself a solid 90 seconds of robot dancing at this news.

You see, the game is changing. The influence of the hardcore new atheists is fading, while the generations haunted by the oppressive spirit of staid religiosity have taken a back seat. The game is changing; indeed, it has already changed.

Surveys can sometimes produce horrifying results. Last month, for instance, 55 per cent of people surveyed believed that soup constituted a main meal. These people need prayer. But for the first time in years, the Luke 10 adage that “the harvest is plentiful” appears to be experientially true in our nation. This is good news! But it needs to drive us to action, not back into complacency.

State of the nation

Having worked as an evangelist during the pandemic, these new figures don’t surprise me. I witnessed more people coming to faith during the first lockdown year than in the previous five years of outreach combined. I think the reason is simple: the self-soothing secular scriptures that permeated our culture were subjected to some textual criticism and found wanting. “You’ve got one life, live it” is difficult when you’re trapped in your house for months because someone ate a bat. “We’re here for a good time, not a long time” rang hollow during those interminable lockdown evenings. That “Keep Calm and Carry On” tea-towel I got from Llandudno pier diminished in its returns. Essentially, the inspirational placebos that we had all lived off to varying degrees stopped working.

When someone sees the worldly comforts with which they’ve surrounded themselves stripped away, the desire for comfort doesn’t depart with it; it simply intensifies. It seeks out something deeper and more lasting - a better story. This is where we come in. This is our cue.

The problem for the UK Church has never been the unbelief of the unbelievers but the unbelief of the believers. The results of this Talking Jesus survey should, at the very least, reignite and re-instill a confidence and conviction in us that there is an increasing amount of low-hanging fruit out there. 45 per cent of the population believe that the resurrection happened. People are open.

But believing that the resurrection happened doesn’t automatically lead to resurrection life - even the demons believe in the resurrection and I don’t think they’re living their best life right now. Because although people are spiritually open, they are open to lots of things, and there are lots of big stories out there that people will happily wed themselves to - unless the Church points them down the right aisle to where the groom is waiting.

During lockdown, the inspirational placebos that we had all lived off stopped working

And this is the real challenge. I have never known a time where so many of my Christian friends have experienced such turmoil. Many of us have felt so utterly brutalised over the last couple of years that we don’t feel as though we have much capacity for anything other than survival. We’re still in safe mode, running on fumes. So what do we do?

I’ve been fascinated by the story of the apostle Peter recently. Satan asked to sift him (Luke 22:31) and succeeded. Jesus told the disciples that they needed to deny themselves and take up their cross (Matthew 16:24), yet shortly afterwards, Peter denies his Lord (Matthew 26:75) and flees from the cross. And yet the final gospel ends with Jesus making breakfast for Peter on the beach and recommissioning him - this moral failure, coward and liar - to the call of building God’s Church (John 21:15-17). The message for us all is the same: you are not written off; you have not disqualified yourself. The game is changing but the plan for your life hasn’t.

Lots of us are still healing. And it’s OK to not be OK. But that phrase needs to be followed by a comma, not a full stop. Because there is real comfort out there. There is real hope and, at some point, there will be a revival. But that requires us to look beyond the valley of the shadow of death in which we’ve perhaps been camped too long, and start moving in the direction of those green pastures beyond. According to the latest research, a third of the people we know will be interested in coming with us.