US pastor Mike Todd has apologised after he received backlash for rubbing saliva in his brother’s eyes during a sermon. The preacher was trying to make the story of Christ healing a blind man "come alive”, but Andy Kind says there are better ways of getting your point across 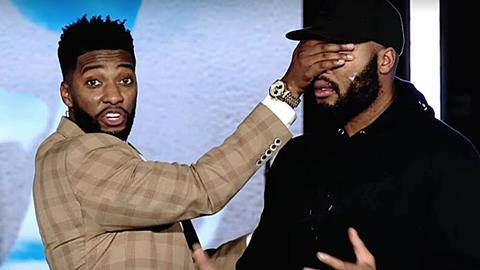 Last week, American pastor Mike Todd rubbed spit into a congregant’s eyes to illustrate a point during a sermon entitled ‘God’s vision for your life’. Ironically, the saliva-drenched audience member hadn’t expected God’s vision for his life to be spat upon during a live stream, but ”the Lord works in mysterious ways” as people who’ve never read the Bible often say.

The most generous reading of the set-piece is that God giving you a vision for your life might be messy and might cause other people to regard you with disgust, in which case Mike Todd has proven that point brilliantly in an Inception-style story within a story. All very meta. It’s also a way of ensuring that he will literally be able say of the talk, “There wasn’t a dry eye in the house.”

However, assuming that on this occasion there might have been better ways to make the same point (and completely aware that every public speaker is only as good as the mistakes they’ve learned from) here are five suggestions for better sermon illustrations. Please don’t spit at me if you disagree.

Have you actually made the point or were you just showing off? A vicar I once knew would often juggle during his talks. His juggling was astounding and enrapturing, but when you use the same illustration to show that ‘God has got us safely in his hands’, ‘Seasons come and go’, and ‘God invented gravity’, maybe the point you’re making is ‘I used to be somebody.’

There’s a rule in comedy: if you want to tell a story that happened to your mate’s uncle, then tell it as if it happened to you. Communication is about intimacy and immediacy; you want the listener to feel as close to what is being said as possible, to see themselves in the situation. So make your illustrations recognisable. The incarnation is all about a seemingly distant God suddenly zooming in to close up, so let your vignettes do that for people - get them inside the skin of the woman at the well and the guy up that tree.

‘Preaching is not entertainment’ is a phrase I hear a lot - almost exclusively from people without much in the way of stage presence. But even Augustine said that one of the three aims of preaching should be ‘delectare’ - to rivet and delight. So do with your sermon illustrations what illustrators do: be artistic. It’s OK to enjoy preaching and to make it your own. The more the authentic you comes out, the more people will listen anyway. And credit where it’s due, Mike Todd was attempting precisely that. However…

4. Don’t drown the point in the illustration (in any fluid, including but not confined to saliva)

An illustration is a side-show, not the main event. I remember an Easter service a few years ago where a live donkey was ridden down the centre aisle to show how Jesus humbly entered Jerusalem. That was great. The problem was trying to say anything after that when all people wanted to do was eyeball the donkey - whose almost constant hee-haw heckling undermined the rest of the talk.

I’m guilty on this one, although when you pay £50 to hire a donkey for a morning you’re going to want to get your money’s worth, aren’t you? But as the great Bard said, “brevity is the soul of wit”. One of the purposes of the sermon illustration is to offer listeners a little picnic break from having to think too hard, but you do still need to reach your destination, so don’t spend too long lounging by the side of the road with foil-wrapped Scotch Eggs and bottomless flasks of coffee. Ironically, that analogy hasn’t served any real purpose in illustrating my last point. I could have just said ‘keep it short.’ Again, all very meta.

Coming back to Jesus

Whatever we think a sermon should be, the reality is that most people watching do want to be enlivened, entertained and intrigued more than they want to be taught or tutored. And being creative with our stage-time is a great way of keeping attention. But we still want people to leave thinking, I liked what they said about Jesus. We can wholeheartedly agree with Mike Todd that God has a vision for their life, and we want to play our part in opening their eyes to that.

It has since been revealed that the spatee was Mike Todd’s brother, so perhaps it’s not as random as it first seemed. And it would actually make a good sermon illustration for when he preaches a sermon entitled ‘Am I my brother’s keeper?’

Nb. No donkeys were harmed in the writing of this article.