Why speaking in tongues is not a weird thing to do

“I thank God that I speak in tongues more than all of you”.

At first glance you might think these words came from the lips of a wild-eyed fanatic who has little regard for the Bible. The gift of tongues is often treated like the proverbial ‘black sheep’ in the family of God.

We can’t completely dismiss the presence of the gift of tongues, but we regard it as something regularly found only among doctrinally weak-minded Christians who are emotionally unstable at best. Tongues is looked on as just plain weird. It’s only people who lack self-control and have little regard for their public image who admit to possessing and making use of this spiritual gift.

But these words are the apostle Paul's very own to Christians at the church in Corinth. Paul is the greatest theological mind the church has known (aside from Jesus), who expressed his heartfelt gratitude to God for this wonderful spiritual gift. Why, then, have we treated this manifestation of the Spirit with such contempt? Why have Christians argued and separated from one another over their differences regarding the nature and expression of speaking, praying and praising God in tongues?

While this would take a deep-dive into church history to fully explain, one overarching truth expels all doubts: God’s gifts are a display of his love and affection for his children. They were designed and bestowed on believing men and women in accordance with our Lord’s infinite wisdom and concern for the welfare and spiritual maturity of his people.

Because our heavenly Father loves us, has our best interests in view, and wants to bless us beyond anything we could ever deserve, he carefully conceived, crafted, and then lovingly bestowed on his children the gracious gift of tongues.

Yes, it’s a gift. Yes, it was God’s idea, not that of any human being. And yes, God thought up and generously poured out on his children a gift that sadly so many of us have frowned upon, made fun of, tried to explain away and largely ignored.

Try to imagine how that makes our heavenly Father feel. How would it make you feel if, out of love, you designed a special gift for your children only to have them laugh at it, mock it and then cast it aside? Speaking in tongues, or what I call the language of heaven, was God’s idea. He thought it up. He invented it. He graciously bestowed it upon the Church.

There is a world of reasons why the gift of tongues is so derided. A claim often made is that the spiritual gifts—and the larger Charismatic Movement—is informed by experience, not the Bible. John MacArthur writes in Strange Fire:

“Biblical truth has never been the hallmark of the Charismatic Movement, where spiritual experience is continually elevated above sound doctrine.”

But when I explore speaking in tongues in my book The Language of Heaven, I ground all my arguments in Scripture, not experience. The Word of God is quite clear that when exercised in conformity with the guidelines set forth by Paul, the gift of tongues is both a glorious blessing to the one who has received it and a means of building up others in the body of Christ.

We must never lose sight of Paul’s expressed desire that “all” might “speak in tongues” (1 Cor. 14:5, ESV), together with his forceful exhortation that we “not forbid speaking in tongues” (1 Cor. 14:39, ESV). Nothing in Scripture suggests that tongues was a gift that God intended only for the first fifty to sixty years of the Church’s existence.

Furthermore, in every biblical text where tongues is mentioned, it consistently serves a positive and spiritually beneficial role in the life of God’s people. Paul’s seemingly critical comment in 1 Corinthians 13:1 is not an indictment of tongues but a rebuke to those who would make use of the gift in the absence of love.

The gift of tongues also serves to edify and strengthen the one who makes use of it in his or her private devotional life. If the apostle Paul himself regularly prayed to God, praised God, and expressed his gratitude to God in uninterpreted tongues in the isolation of his own ‘prayer closet,’ it stands to reason that we today should embrace this precious gift of the Spirit and make good use of it to the same end.

I wrote The Language of Heaven not for scholars but for the average Christian who longs to pray with more power and passion and to praise God with greater fervour and joy.

My prayer is that the Church will be enlightened on a wonderful work of the Spirit; that Christians will have a renewed joy and passion in their prayer lives; and that more believers will open their hearts to the gift of tongues.

Sam Storms has spent four decades in ministry as a pastor, professor, and author. His book The Language of Heaven is released out now. Dr 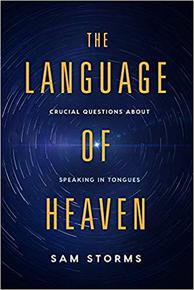 Storms served as visiting associate professor of theology at Wheaton College from 2000–2004 and is currently lead pastor for preaching and vision at Bridgeway Church in Oklahoma City. He has authored more than twenty-five books and founded Enjoying God Ministries.