“The meaning of history,” wrote Abraham Joshua Heschel, “is to be a sanctuary in time.” With that subtle insight, the noted 20th century rabbi drew attention to the paradoxical standing of human presence in the world. By our individual acts we can either increase the misery, suffering, and pain of others or contribute to their relief, healing, and well-being. Whenever we do the latter, Heschel writes in God in Search of Man, we are creating sanctuaries for people in distress.

When you see someone who is a living epistle of that kind of compassion and care, you really must stop and wonder. And when you see it taking place day after day in a loving marriage, and in the bitterest of conditions therein, you are beholding a blessed sanctuary indeed.

In Walking through Twilight: A Wife’s Illness – A Philosopher’s Lament, Douglas Groothuis invites us to experience what daily life is like in one such sanctuary of compassion and care. The eloquently written memoir begins with the tragic reversal of fortune that has come to him and his wife, Becky, and from its opening lines we learn how difficult it was to write. For Groothuis had to speak not only for himself but also for Becky, a once-talented author, editor, and member of the Mensa society who now lives virtually without language capabilities. She suffers from primary progressive aphasia (PPA), a rare disease that disables the speech and language centers of the brain.

In scenes poignantly described by Groothuis – in their home, at a restaurant, in an art gallery – we meet an embattled couple whose better half is nearly completely unable to speak or to understand what she hears. “She must fight a bloody war,” he writes, “to secure the simplest word.”

Thankfully, Groothuis, who teaches philosophy of religion and ethics at Denver Seminary, does not offer a timeline of his wife’s mental deterioration. Instead, he recounts many and varied experiences along what he calls the “darkening footpath.” And he does not mince words. His willingness to be dead honest about his confusion, anguish, denial, anger, and lament is both painfully moving and biblical in its realism.

In his introduction to the memoir, Nicholas Wolterstorff aptly captures this tenor when he writes that Groothuis “does not flinch from the painful reality [that] this ravaging disease has wreaked in his life and that of his wife.” Each chapter bears this out, as do chapter titles such as: 'Rage in a Psych Ward', 'The Temptation to Hate God' and 'Learning to Lie to My Wife (as Little as Possible).'

“Under the tyranny of her disease,” Groothuis writes, “I learned of depths of sorrow and distress I had never known before...Little did I know how much psychological agony a human soul could bear...I learned how it feels to weep often and to cry unexpectedly, even in public. When my eyeglasses are smudged, and I take them off to look at them, I often find the marks of tears. I now behold much of the world through tears and am alert to the tears of others.”

Such unflinching honesty runs throughout this beautiful love story, and it made me wonder: how in the world does he keep going? Eventually it hit me. It isn’t only Becky who is changing. As Christ was changed by his cross relevant to our sin, the caregiver himself is being changed by his cross relevant to her disease. And in the process he, like Christ, is being carried along in his sufferings by the loving, caring grace of God, even during days when the sun is eclipsed by the moon.

That narrative of grace is the secret story of Walking through Twilight. And it recalled to mind Marilynne Robinson’s idea of finding a story that has a suggestive power far beyond its subject.

This, then, is no woe-is-me memoir. Groothuis writes “to offer courage, hope, and meaning.” Scenes throughout the book run between the tender and the tragic, giving witness to the couple’s experiences of grace and meaning on their distressed path. There is the amusement and comfort the couple receives from Sunny, their almost-human Goldendoodle. There is the weight and effect of Becky’s illness on Groothuis in his classrooms, where we see him struggling to answer the question: “how can my sufferings be nobly born before students?” There is a groundbreaking and probing chapter of lessons he has learned from lamenting online. And the penultimate chapter – an Interlude given the title “Resting” – is so intimate a sanctuary moment that I wondered if the veil should not have been left drawn across it.

The story is rich in wisdom from Christian writers such as WH Auden, GK Chesterton, JRR Tolkien, and CS Lewis. Groothuis also draws clarity and inspiration, often during the darkest moments, from unlikely sources: the essayists Michel de Montaigne and Christopher Hitchens, the music of Pink Floyd or Metallica, and the paintings of Jackson Pollack and Mark Rothko.

Groothuis’s greatest solace, however, is found in scripture, especially in the Bible’s literatures of lament and wisdom. He digs deeply into these waters, refusing to rely on cliché or rest in simple explanations. The book of Ecclesiastes is a particular saving grace for him. He writes that the book gives him “the perspective and language of lament necessary for my own sad sojourn during the last fifteen or so years with my chronically and now mentally ill wife. It is a deep well of tough wisdom for the weary and wasted soul.”

By contrast, Groothuis and his wife find moments of relief, surprisingly, in simple laughter. “Becky’s humor,” he writes, “while not so fine-grained as it was, remains more in tact than most of her other mental functions.” A laugh momentarily “removes us from Becky’s memory loss, speech loss, happiness loss, and the near loss of faith.”

And their closeness over many years, he writes, gives him “a comedic freedom not afforded to others. Becky cannot dish it out as she used to. But she can take it and laugh.” Even at gallows humor. Of course there is nothing funny, he explains, about Becky’s condition itself. “To ridicule it would be sadistic. But humor can find odd angles of vision on even the worst situations and without rancor or ridicule.” One such moment happened after dinner: 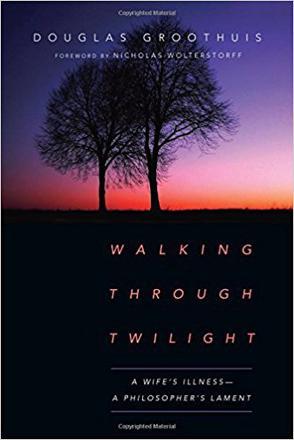 “I anomalously left a piece of pie with cream on the dining room table and went to my desk to do some paperwork. (Me doing paperwork can be quite humorous in itself.) Becky soon walked to me with that piece of pie, but without a fork. I said, ‘Where’s the fork?’ She looked perplexed and said she didn’t know where they were. I went with her into the kitchen, opened the utensil drawer, pointed, and said, ‘Well, there they all are.’ We both laughed again.”

Contrary to popular belief, and Superman mythology, real diamonds are not formed from lumps of coal. Neither are literary diamonds. Both require a combination of extremely high temperatures and intense pressures found in the deep depths of the Earth’s mantle. Yet over time, some get forced to the surface. Walking through Twilight: A Wife’s Illness, A Philosopher’s Lament is such a literary find. It is of one of the most significant books on human suffering anyone will ever read. Grace-giving love is its underlying narrative. Because of that love, this memoir will help readers who are beset by real troubles to face them with courage, wisdom, and hope. And find sanctuary.

Charles Strohmer is the author of eight books, including, most recently, Odd Man Out: My True Story of Misplaced Faith in the American Dream and the Age of Aquarius. He is also the founder of The Wisdom Project and blogs at wagingwisdom.com

Walking through Twilight: A Wife’s Illness – A Philosopher’s Lament (IVP) by Douglas Groothuis is out now