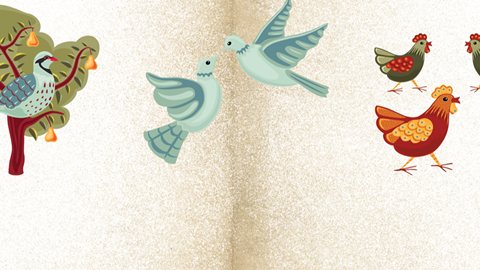 ‘Why is there a partridge in my pear tree?’ Christmas carols are weird. Here’s what they mean

Ships, partridges and kings you’ve never heard of…William Long delves into the meaning behind some of our most bizarre carols

Every year, my church holds a carol service in the lead up to Christmas. It’s our most popular annual event. Bright lights are replaced by the warm glow of 100 pillar candles. It is a great opportunity to listen to the Nativity story unfold and sing together of Christmas cheer.

There is something incredibly comforting and heart-warming about singing carols. Perhaps it’s because of the nostalgia that is conjured up for family Christmases past or carollers knocking on doors in our favourite festive movies. But where did the tradition come from and why are some of our most-loved carols quite so…well…weird?

Christmas has been associated with songs since the very beginning; in Luke 1:46-55, after the birth of Jesus was foretold, Mary spoke the words of the Magnificat, also known as the Song of Mary.

In the fourth Century, St Hilary of Poitiers wrote ‘Jesus refulsit omnium’, the first song about the Nativity. But even though it was about Christmas, it doesn’t sound much like a modern-day carol. Instead, it is a slow and reflective chant written to be sung without music.

The first songs to resemble the carols we know and love appeared in the Middle Ages. These folk songs – not exclusively religious – were sung by wassailers who travelled door-to-door singing and offering hot mulled cider to spread joy through the bleak winters. Many of the carols we sing today were born out of this tradition and use the medieval chord progressions and scales that give carols their iconic feel.

In 1644,Oliver Cromwell’s parliament banned Christmas. In an act of defiance, carols became more religious and, by the Victorian era, they were almost exclusively about Christmas.

We sing Christmas carols to recount the story of the Nativity and to celebrate the joy and awe of Christmas. This is why many carols, such as ‘While shepherds watched their flocks’ and ‘Go tell it on the mountain’ are taken directly from the Gospels.

But why do we also sing carols that have seemingly little to do with Jesus? What does a partridge in a pear tree have to do with Christ’s birth, for example? What do the boats in ‘I saw three ships’ tells us about the Nativity, which took place in landlocked Bethlehem? And who on earth was ‘Good King Wenceslas?’ Well, let’s find out.

Why is there a partridge in my pear tree?

Some people label ‘The twelve days of Christmas’ as the most annoying carol. It’s a long song with a lot of repetition, and a lot of seemingly meaningless gifts that no one in their right mind would want to receive, let alone give, to a person who is supposedly their true love.

In one episode of the American version of The Office, Andy draws Erin as his secret Santa and decides to surprise her with gifts from ‘The twelve days of Christmas’. Erin enters the office with two large scratches down her face, revealing that her cat has killed a turtle dove and the French hens are pulling out her hair. Andy privately wonders: “Is it my fault that the first eight days is basically 30 birds?”

This carol most likely finds its origin in a French children’s memory game – a bit like our version of ‘Shopping list’ – “I went to the shops to buy…” If you’re used to leading youth groups, you will know that kids always try to make their additions as complicated as possible, finding it hilarious to watch other children struggling to remember them.

So there’s a good chance that some of the more ridiculous gifts in this carol were added by children hoping to trip up their friends. But do they hold any significant meaning, or relationship to the Christmas story we read about in our Bible? The short answer is no, they don’t, although one theory claimed that the twelve gifts each had a secret meaning (see below) to help young Catholics learn about their faith when Catholicism was forbidden by British law – until the Catholic Emancipation Act was passed in 1829.

While this theory has now been proven false, you might be more excited to sing about ‘twelve Lords a-leaping’ if they represented something more meaningful. So here are the suggested alternative meanings of the twelve gifts to help you use a fun carol as authentic worship:

A partridge in a pear tree = Jesus

Five gold rings = The Pentateuch, or the first five books of the Bible

Seven swans a-swimming = The seven gifts of the Holy Spirit

Nine ladies dancing = The nine fruits of the Holy Spirit

There is a distinct lack of sailing in the Nativity story, probably because – as a quick glance at an atlas will tell you – Bethlehem is landlocked. There are donkeys, certainly. Angels aplenty. Wise men, for sure. But with the nearest body of water being the Dead Sea, almost 20 miles away, ships? Not so much. Which begs the question: is there a deeper meaning to the carol ‘I saw three ships’?

The carol first appeared in print in William Sandys’ 1833 publication, Christmas Carols, Ancient and Modern, which also featured the first appearances of ‘The first noel’, ‘God rest ye merry gentlemen’ and ‘Hark the herald angels sing’. Sandys was an English solicitor who took it upon himself to collect the carols being sung in England at the time and his publication, in part, undoubtedly contributed to the Victorian resurgence of Christmas.

Because of the repetitive lyrics and simple chord structure, scholars believe ‘I saw three ships’ originated in the Middle Ages. In which case, the medieval minstrels who wrote it may have had little knowledge of Bethlehem’s geography and could have mistakenly believed it was near the sea.

An alternative hypothesis suggests that the three ships are based on those which supposedly took the bones of the Magi, who had visited baby Jesus, along the Rhone river to Cologne cathedral, Germany, sometime in the 12th Century. The relics, which are still on display today, became one of Europe’s most significant sites of pilgrimage, and the building of the shrine that was to house them likely generated much interest and excitement in then-Catholic England, perhaps even inspiring a song.

Another theory suggests that the three ships were inspired by a coat of arms worn by King Wenceslas II of Bohemia (who, just to confuse matters, has nothing to do with Good King Wenceslas, who we will come to later). Wenceslas II’s coat of arms was indeed decorated with three ships, but there doesn’t seem to be a good reason for medieval English minstrels to write a song that referenced the insignia worn by a Bohemian king.

My favourite theory is that the hymn’s ships are purely metaphorical and actually represent camels, often nicknamed ‘the ships of the desert’. But while this seems to make the most sense, there’s little evidence to support it.

Despite not knowing its origins, ‘I saw three ships’ is a joyous carol that we can use to celebrate Christmas, especially when we sing the last three verses: “And all the Angels in Heaven shall sing…And all the souls on earth shall sing…Then let us all rejoice again…” I can’t help but think of the angels in Revelation 5 and how, when we worship God with song, we’re joining with not only other souls on earth but also with celestial beings in heaven. What a powerful thought, even if we never know where those three ships came from.

Who on earth was Good King Wenceslas?

In The Muppet Christmas Carol (a masterpiece of Christmas cinema), the adorable Bean Bunny, a small scruffy rabbit in a tiny red cardigan and long blue scarf, greets Ebenezer Scrooge at his door by singing ‘Good King Wenceslas’. He asks, in his sweet little voice: “Penny for the song, guv’nor?” – only to have Scrooge throw a Christmas wreath at him. But who was this good King Wenceslas? And what does he have to do with Christmas?

King Wenceslas was actually Wenceslas I, Duke of Bohemia, who lived from AD907 to 935. He was a devout Christian, and conflicts between Christian and non-Christian factions led him to take it upon himself to actively work to spread Christianity throughout Bohemia.

Unfortunately, this angered his non-Christian opponents and he was eventually assassinated by his own brother. Almost immediately after his death he was canonised by the Church and, several years later, Holy Roman Emperor Otto I posthumously gave Wenceslas the title of king.

The carol was written by hymnist John Mason Neale who is also known for ‘O come, o come, Emmanuel’. He based ‘Good King Wenceslas’ on the legend that Wenceslas would travel barefoot to local churches at night to generously give food and money to those in need.

In the carol, Wenceslas is travelling with his page through the snow to give alms to the poor, but the weather turns bitter as the winds grow wild. As the page succumbs to the cold and believes that he is going to die, Wenceslas tells him to stay close behind him and walk in his footsteps. The page does as he is told and finds warmth in Wenceslas’ steps.

The moral of the story, presented by Neale at the end of the carol, is a call to all Christians to help those in need. And in return, Neale assures them that God will also bless them: “Therefore, Christian men, be sure / Wealth or rank possessing / Ye, who now will bless the poor / Shall yourselves find blessing.”

Even though the carol might not seem very Christmassy on the surface, it contains a strong Christian message. As Wenceslas calls his page to follow in his footsteps, we are reminded of the call to follow Jesus, and the promise of God’s blessings on our journey (John 12:26).

There’s no denying that Christmas carols – and Christmas music in general – can be a little bit weird, but don’t let that stop you from singing in a worshipful way. Dive a little bit deeper into their meaning, think about the words that you’re singing and the reason why you’re singing them, and use it as an opportunity to celebrate Christmas with your friends and family.

William LongWilliam Long is an author and film editor from Hertford. He has published two books about hymns, Hymns of Note and Hymns Of Note: Rejoice. He has edited three feature films, and his short documentary Life In North Korea won first place in the FiLMiC Pro Places film festival. To see more of his work visit @hymnsofnote on Instagram and www.hymnsofnote.com