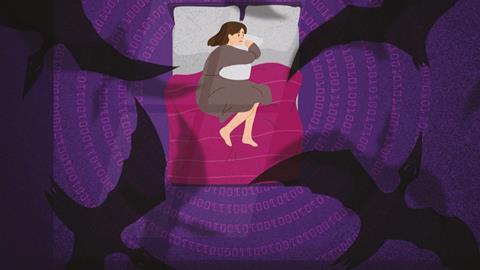 Losing touch with reality: A scary psychotic experience shook my faith. But recovery is possible

Sharon Hastings was training to be a doctor when she had her first psychotic episode. She describes her remarkable journey through severe mental ill health towards recovery, and how Christians helped – and sometimes hindered – that process

I huddle closer to the wall, pulling the blanket from my knees up to my nose, eyes darting from side to side.

There’s a knock at the door and I choke, startled.

“Is it them again?” Claire, my key nurse, asks. She motions towards the end of the bed. “Can I sit?”

I nod, then lift my elbow, pushing back against the evil presence. Shadowy pterodactyls circle above, flapping their wings and cackling at me, mockingly. I shade my eyes. “The tormentors?”

I tug on my hair, then wring my hands. “Yes, tell them to stop, Claire…please!”

“I know these tormentors and the evil presence are very real to you, Sharon – as real as I am sitting here – but, like I said this morning, we believe you are seeing them because you aren’t well.” She speaks softly and firmly.

But I am well. I’m connected to the fourth dimension. The tormentors are pulsing coded messages right into my brain. I know all about the conspiracy. I know God has chosen me for this. I have access to the network. No one else here has. And yet, I still feel frightened.

I bury my face in my blanket now. My body shudders.

Claire edges forwards and places a gentle hand on my knee. I can’t look up.

“Sharon, Sharon…They really are tormenting you, aren’t they? You don’t have to believe me, but is there any part of you that thinks you might just be a little unwell?”

I feel hot tears of confusion running down my cheeks. The room seems to go out of focus.

“Dr Rogers might want to change your medication. I think he has a few things to discuss with you – about the symptoms you’ve been having. Do you feel you can talk to him? He has seen a lot of people who’ve had experiences similar to yours, and he’s very wise.”

Claire takes a packet of tissues from the pocket of her tunic and hands me one.

“Will you come with me?” I whisper.

A face appears in the little square window in the door, signalling to Claire that the doctor is waiting.

I shuffle down the dimly lit corridor, Claire at my side. The door to the consultant’s room is open.

He welcomes me kindly, sits me down and explains that the team have updated him on what has been happening over the past few days.

“Sharon, you were very depressed on your last admission. You’re not now, but you’re still having problems, aren’t you? How would you feel if I told you I think that you have schizoaffective disorder? These problems you’re having – the ‘tormentors’, the ‘network’ – they are due to psychosis.”

At the time of my diagnosis, I had recently graduated as a doctor – a long-held dream that came crashing down because of my mental health problems. The General Medical Council had found me unfit to practise and I felt crushed.

My faith was also shaken because I believed that God had called me into clinical medicine, and so I could not understand why he had allowed this to happen.

For eight years after my diagnosis, I suffered repeated episodes of depression and psychosis, finding myself back in hospital several times.

My doctors prescribed a variety of drugs, each of which proved ineffective, or had troublesome side effects. I also underwent electro-convulsive therapy with little success. I came to believe that God must want me to live well for him in the context of ongoing and severe mental illness.

Then, in 2019, some important changes meant my life began to turn around. My doctors found a regimen of antipsychotic and antidepressant medication that was both effective and tolerable; I started some helpful talking therapy; and I met health professionals – and peer support workers – who believed that recovery really was possible.

This course of events didn’t alter my career options, but gradually, my perception of God’s plan for my life began to shift.

Today, I am stable – I am “in recovery”, as they say. This is not the same as being cured, but it means that I have a life worth living, despite the presence of ongoing symptoms and drug side effects.

I take antipsychotics three times a day, a mood stabiliser and an antidepressant. I use a variety of strategies, including Wellness-Recovery Action Planning and secular mindfulness practices, to help stay well. And, each day, I renew my focus on – and commitment to – recovery.

I am married, I have a young son and I have meaningful part-time work as an author and speaker. But being a Christian with schizoaffective disorder has had its challenges.

When I was actively psychotic, thinking I was plugged into a network and stalked by tormentors, my world was very dark, but I thought that God had chosen me for special purposes.

Psychotic episodes experienced by people of faith often have spiritual themes because the dopamine surges are believed to corrupt existing patterns of thought rather than generate new ones, so my distorted ideas were no surprise to my doctors.

But I found it very difficult. My confidence in God’s call to care as a doctor was proving untrue; now I believed he had called me to receive messages from another dimension.

The messages, however, didn’t seem to make much sense; I felt no peace; and others – Christians and secular health professionals alike – were telling me that my “call” was merely the outworking of mental illness. I felt very alone and spiritually confused.

I lacked the ability to seek God’s true will in any coherent way. Yet, in moments of lucidity, I found that he spoke peace into my disordered world, reaching into the murky chaos and offering glimmers of light.

As I emerged from my distorted reality, I sensed God’s deep compassion for me. I sat in the hospital with others suffering from psychosis, and sensed that God wanted to relate to them, too. Eventually, I would feel a new call over my life.

During those especially difficult times, I had needed others to keep faith for me, yet some well-intentioned Christians failed to recognise that I was unwell. They saw my dark experiences as evidence of the devil at work and tried to ‘deliver’ me through prayer.

This had devastating effects, leaving me terrified that I might be possessed – and therefore could not be a Christian. Ultimately, I found refuge in a church where gentle, godly people nursed me back to confidence in my salvation.

My faith is now strong, and even non-religious health professionals recognise that it helps to maintain my recovery. I do believe God has called me to a special purpose: to shed light on the issue of psychotic illness and to be a voice for those with severe mental illness. Today, I am confident that this is not a delusion!

When I first became unwell, I held tightly to my identity as a medical student, playing down my mental health diagnoses. Once I was told I could not practise as a doctor, this identity faded.

Reluctantly, I accepted that I had become a “psychiatric patient”, taking on my schizoaffective disorder as a new identity. After all, this illness seemed to dominate everything I did. Nevertheless, I found the ‘schizo’ part of the label stigmatising and dehumanising.

During my hospital admissions, I met a wide variety of people with severe mental illness and, although everyone’s story was different, I understood some of the suffering they had experienced.

I remember being struck by the fact that these were people, created in God’s image, all with their own gifts – as well as their struggles. Again and again, they blessed me through a kind word, a hug or a handmade card. Although not all knew God, I felt that he knew them and cared deeply for them. He didn’t see diagnoses. He saw his children.

As my care became focused on recovery, I was encouraged to invest in family, interests, church and community, and as I did so, the impact of my illness lessened. Gradually, I came to see myself as Sharon – wife, writer and later mum – rooted and grounded in Christ, who happened to have a severe mental illness.

This helped me to relate to God differently. I had seen him meet my needs when I was at my most vulnerable, and I knew his graciousness and compassion (Psalm 103:8).

I would always be his child. But now I wanted to take on an adult sense of responsibility for knowing him more fully. I re-read the whole Bible and took two seminary courses, encountering his justice, righteousness and power. This made his compassion for me, and the other mentally ill people I had met, seem even more incredible.

Today, I pray fewer ‘arrow prayers’, spend more time in thankfulness and praise, and seek God’s help as I work to bring hope to others with severe mental illness and their families.

Christians with psychosis have many challenges, but faith in God is helpful and recovery is possible. God values those who suffer and has special compassion for them. It matters how the Church and ordinary Christians respond because it is possible to cause harm.

But the rewards of respectfully offering fellowship and community can be great for all concerned. My prayer is for an inclusive Church that cares about people with severe mental illness. If God can relate to someone who has lost touch with reality, then so can we, his people.

Sharon HastingsSharon Hastings qualified as a doctor in 2007 but was diagnosed with schizoaffective disorder four years later. She became a writer and published a memoir, Wrestling With My Thoughts (IVP) in 2020. Sharon lives in Newcastle, County Down, with her husband, Rob, their one-year-old son and two golden retrievers. She loves music, books and walking by the sea.