Fearfully and wonderfully made: Why studying the embryo leads me to worship 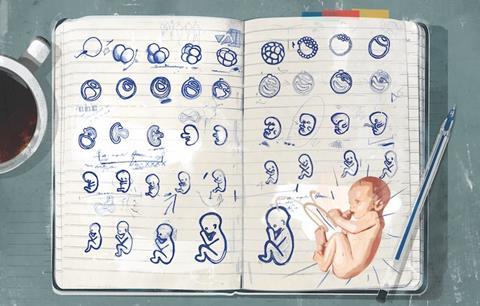 Anyone who has held a newborn baby can’t help but be astonished at how incredibly delicate, yet intricately structured, newborns are. Such tiny fingers and toes, such delicate features! Even more remarkable is how reproducible it all is: the delicate flowering of human life has been replicated billions of times across the planet.

This profound sense of wonder drives developmental biologists - scientists who seek to understand how each of us had our beginnings as embryos.

As a professor I have the privilege of communicating the wonder of development to students every spring term. I point out that people have been pondering this process for millennia. I then read from an ancient piece of Hebrew poetry:

”For You formed my inward parts; You wove me in my mother’s womb. I will give thanks to You, for I am fearfully and wonderfully made; wonderful are Your works, and my soul knows it very well. My frame was not hidden from You, when I was made in secret, and skillfully wrought in the depths of the earth; Your eyes have seen my unformed substance; and in Your book were all written the days that were ordained for me, when as yet there was not one of them.” (Psalm 139:13-14)

The notion that cells are building blocks of embryos wouldn’t be discovered for a millennium and yet the Psalmist understood that development is an orderly process: like a master weaver moving a loom, forming an integrated organism from simpler parts requires movements of utmost precision.

Building the embryo is a staggering challenge: each of us started as a single cell smaller than the full stop at the end of this sentence. Eventually that single cell gives rise to five trillion cells at birth, specialized and arranged to form our tiny bodies. 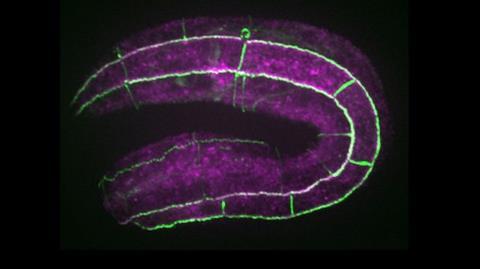 Jeff’s love affair with embryos began when he first set eyes on a developing sea urchin, and continued with worms called C. elegans. This image highlights the connections between layers of cells (in green) © Hardin Lab

Differentiation isn’t enough, however. Some assembly is required! The fertilized egg divides into two cells, two into four, and four into eight, resembling a loose cluster of grapes under the microscope. Then the cells of the embryo produce their own molecular glue: proteins my laboratory investigates that allows subsequent development. Then morphogenesis, literally the ‘genesis of form’, begins. The movements of cells to new locations is a self-construction project of staggering scope, and another career-long interest of my research group. After more cell divisions the interior cells, which months later will form a baby, separate into layers as the basic body plan emerges. A flat sheet of cells on the back side of the embryo then rolls into a tube, eventually forming the embryonic brain and spinal cord. Other organ systems form as the fetus grows, each via a fascinating process of differentiation and morphogenesis. Fearfully and wonderfully made indeed!

Our modern understanding of embryonic development leads to challenging questions. One has been posed by a very practical theologian, my wife Susie. Haven’t we taken the mystery out of development by studying it in such detail? This was the poet John Donne’s worry: ”And new philosophy calls all in doubt/ The element of fire is quite put out…Tis all in pieces, all coherence gone”.

For me, the biological details are a new opportunity to see God at work. As the 19th Century theologian Charles Kingsley said, ”Are we to reverence Him less or more, if we hear that His might is greater, His wisdom deeper, than we ever dreamed? We knew of old that God was so wise that He could make all things: but…He is so much wiser than even that, that He can make all things make themselves.”

A third challenge is the tiny size of the embryo. Just as the famous ‘blue marble’ image of Earth from the Moon changed how many view our planet, we might be tempted to think that our diminutive size implies diminished significance. Psalm 139 says otherwise: there is nowhere the psalmist could ever go, including before his birth, where God has not been. For the Psalmist, God has ordained the self-crafting process. God was superintending the formation of the Psalmist’s body, down to his organ systems!

For Christians, an additional theological resource for thinking about embryos is the mystery of the Incarnation. The Apostles’ Creed says that Jesus ‘was conceived by the Holy Spirit’ and ‘born of the Virgin Mary.’ Between these two events is the process of embryonic development. As poet Luci Shaw put it:

“His searing sharply-focused light / Went out for a while / Eclipsed in amniotic gloom / His cool immensity of splendor / His universal grace, / Small-folded in a warm dim female space.”

This suggests a profoundly personal notion: the second person of the Trinity has dignified embryonic development – including yours and mine - by taking it up into the divine life. For Christians then, the world of the embryo is a truly ‘wonder-full’ world!

Jeff HardinJeff Hardin is Raymond E. Keller Professor of Integrative Biology at the University of Wisconsin-Madison. His research group studies how sheets of cells in embryos move and how they adhere to one another. His work features in the recent illustrated book Wonders of the Living World: Curiosity, awe, and the meaning of life (Lion Hudson/The Faraday Institute).
Follow @https://www.twitter.com/jdhardin1959