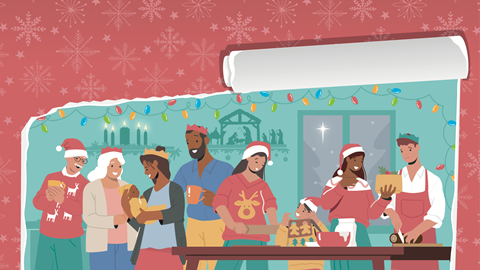 Can Christians afford to be hospitable this Christmas?

Christmas provides us with a special opportunity to show love to others, says Jo Swinney, and being hospitality doesn’t have to cost the earth

My mother’s journal entry for 24 December 1987 read: “I cannot recall a more joyous Christmas Eve, from the first glimpse of glorious sunrise through the hall curtains, to the late night laying down of bumpy stockings at the ends of various beds – a day of perfect happiness and contentment.

”I woke before 6.30am, full of anticipation and excitement and made two dozen mince pies before breakfast, listening to carols while they cooked. I had a special time of prayer, asking for grace, strength, love and joy, and to be a blessing to my family and friends amid all the busyness and preparation, not a bear with a sore head to be avoided. And my prayer was answered!”

Christmas was the pinnacle of my mum’s year. She always claimed that the Christmas tree was the best ever, the turkey the juiciest and the gifts the most thoughtful. Each Christmas featured an extravagant feast.

On the table around the enormous bird – itself filled with sausage stuffing at the front and herb and lemon at the back – was roast and mashed potatoes, parsnips, sprouts, peas and sweetcorn, cauliflower cheese, pigs in blankets, purple cabbage, braised leeks, cranberry sauce and gravy.

She eventually confessed she’d set herself a private challenge of adding a side dish to the meal every year, until it became borderline ridiculous and she let herself off the hook.

For Christians, the Bible seems to assume a hospitable life is a given

The most important thing I learned about Christmas from my mum was not how to cook 25 separate dishes simultaneously (I still don’t know how she did it), but that Christmas is about love. It is about a love so deep it brought God to earth as a helpless babe. And it provides a special opportunity for us to show that love to others, by extending them an invitation to a place at our table.

Growing up in a field study centre in southern Portugal, home of the first A Rocha (the Christian nature conservation charity that my parents helped found in 1983), extras around the table were the norm rather than the exception.

It was never just our nuclear family of six. Perhaps the most memorable of all who joined us at Christmas was the homeless Israeli couple who arrived at the house on a stormy Christmas Eve. Having had enough of fighting, the man had absconded from the army and, with his wife, was looking for somewhere to lay low in south-west Portugal.

They had turned off the main road and onto the muddy headland track where we lived but had run aground in the marsh, from where they had proceeded on foot to seek shelter. In a beautifully Christmassy twist, she was heavily pregnant with their first child, a son.

Few of us, myself included, live such radically hospitable lives. God doesn’t ask or expect us to have massive, constantly changing households, nor should we feel compelled to feed 20 mouths each mealtime, or even just for Christmas lunch.

But for Christians, the Bible seems to assume a hospitable life is a given, so what might that look like in a context like yours or mine? What does it mean for those of us living in tiny homes? Is it even possible to be hospitable this year, with the cost of heating and food at frighteningly high levels? What if we are terrible cooks? 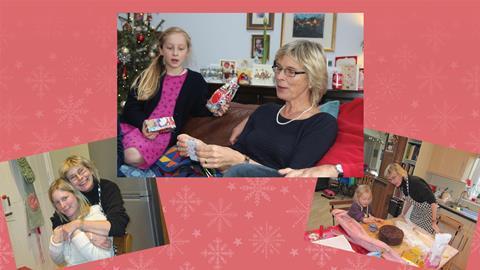 What can I bring him?

Thanks to Gary Chapman’s runaway bestseller, The 5 Love Languages (Moody) we know there are five main ways to give and receive love. And hospitality is no different; it means different things to different people.

For some of us, it’s about inviting someone for a sandwich and a long, silent walk. For others, it’s asking a guest to peel the potatoes and make those funny cross hatches on the sprouts. It might mean forgoing Christmas TV this year, or putting the telly on instead of playing the traditional family board games, if it would make a guest feel more at home.

When resources are tight, continuing to share what we do have is a clear sign of God’s character reflected in us, and often has more impact than hospitality given in more comfortable times. Just as Jesus used a small boy’s packed lunch to feed 5,000 people (Matthew 14:13-21) so, too, can he use what we offer – however meagre – in ways only he could imagine.

The most important thing I learned from my mum was not how to cook 25 separate dishes, but that Christmas is about love

And if we are really struggling to afford to stay warm and fed, remember that God was also very good at receiving hospitality. Revelation 3:20 portrays him at the door waiting to be invited in for dinner. We can let ourselves be cared and provided for by others without shame or fear of reproof. It’s what being part of the family of God is all about.

To the final question, I would say this: although a delicious meal is a wonderful thing, what really makes a difference is the gift of someone’s full and kind attention. Don’t worry if you can’t or won’t cook; your company is more than enough. And no one minds a shop-bought mince pie!

In the bleak midwinter

Christmas can be the most wonderful time of the year, but it can also be a terribly sad and lonely time; a time when bereavement feels more raw and when the expectations of cheer grate painfully with our true inner state. It’s one of the reasons that hospitality is particularly important at Christmas.

Jesus was born into a harsh reality – a dirty animal shed, an unsafe political situation, a religious establishment that had their hopes set on an altogether more impressive-looking saviour. Christmas marks the birth of God himself into this world.

When we extend a welcome to another person in his name, we echo his willingness to come close to the mess and, in that closeness, transform it.

Another Christmas tradition to which my mum held fast was ‘the Christmas letter’. In it, she would share the family’s highlights, and she did so every year until 2018. A year later, on a working visit to South Africa, she was tragically killed in a car accident.

With uncanny prescience, in what turned out to be her last Christmas correspondence, she wrote: “Last Sunday I held a very small baby in church while her mother went to collect the other children. She lay still but alert in my arms, small dark eyes exploring the periphery of her still-blurred vision before settling on my face, the faint upward turn of her mouth bestowing a smile as stirring as the Advent hymn which enveloped us both…[it reminded me that] our times are in his hands” (Psalm 31:15).

The letter continued: “This year, we are all invited to move closer to a tiny child, more miraculous still – God himself contained in a newborn baby, eternity captured in time, or ‘fullness of God in helpless babe’, as we sometimes sing. The mystery and marvel seem to deepen each year.

When resources are tight, continuing to share what we have is a clear sign of God’s character

“I have been thinking quite a bit about time recently. 2018 has gone so fast – I feel quite breathless to be on the threshold of Christmas once again. But I love this season. The expectant waiting of Advent, the child-like anticipation of the birth of Jesus, the hope of light arriving in the middle of whatever darkness surrounds us, and the delight of reconnecting with friends, so few of whom we manage to see in the fullness and fastness of life. For many people, of course, it is a sad and lonely season, and for us, too, there has been grief this year.

“Four precious friends died over a period of three months in the early autumn and, through their loss, I have begun to understand a little better that grief includes losing someone who loves us as well as someone we love. The world loses a little of its warmth and comfort. I have been consoled by the God who created and controls time; he sent his Son in the fullness of time and he is the cosmic expert on the timing of all things – though so often it doesn’t feel like it.”

As a child, I would be bitterly upset when Christmas was over. But since losing my mum, I have come to realise that the saying is true: all good things come to an end. In this life at least. Since her death, I have thought a lot about the Bible’s promises about the life to come.

The scriptures say it will be like a great feast, where everyone has a place at the table, there is an abundance of food and no fear of hunger. We will have bodies made to last an eternity – no pain or decay. We will live this never-ending life in the fullness of the presence of God, worshiping him as he deserves, forever and ever.

Until then, we share his kingdom by living as he calls us to – generously, sacrificially, joyfully and hospitably. Let’s extend wide welcomes in his name this Christmas, and watch the miracle of his love at work.

Jo SwinneyJo Swinney is director of communications for A Rocha International and an author. Her latest book was co-written with her mother, Miranda Harris. A Place at the Table: Faith, hope and hospitality (Hodder & Stoughton) is available now