Even our bishops aren’t bothered by Hancock’s infidelity. Whatever happened to Christian morality?

The Bishop of Manchester says he’s more worried about Matt Hancock breaking the Covid rules than him having “a bit of a fling”, but Christians should care about the personal lives of their politicians, and they shouldn’t be afraid to say so, says Emma Fowle 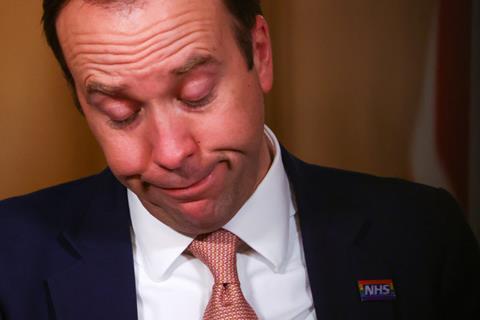 This morning, I sat down to write to my MP. He’s a local man, a Conservative backbencher with no particular influence. I’m not expecting him to march into Number 10 and demand an audience. I know he probably can’t do anything with my complaint, but nonetheless, I felt compelled to make it.

Most of this weekend’s media coverage on Matt Hancock’s resignation focused on the breaking of rules. How could the Health Secretary remain in post when he’d broken the very rules that he had asked the entire country to abide by for so long, and at such high personal cost? Did he appoint Gina Coladangelo to a tax-payer funded position in his department before or after their affair began? And what does it mean for the age-old accusations of cronyism that her brother runs a company that has benefitted from lucrative NHS contracts?

All of these are important questions that require thorough answers. But something was missing. Very few seemed to wonder…what about his affair?

According to the national press and much of the twittersphere, Hancock’s infidelity was the least significant of his sins. The implication was that the only people who really care about what he gets up to after hours are prudish old ladies, religious zealots and Mary Whitehouse. When even the Bishop of Manchester says, on national TV, that he’s more worried about Mr Hancock breaking the Covid rules than he is about him having “a bit of a fling”, it can make it feel harder for Christians to express an alternative view.

But you know what? I do care. And I think more of us should.

I want my MP to know that I care about the example our politicians set. I care that despite resigning, Matt Hancock has not yet had the decency to apologise for the pain he has caused his wife and children, for the wedding vows that he has broken. I care that in the 90 second video now pinned to the top of his Twitter feed, he spends more time talking about the government’s achievements than expressing any sort of remorse or repentance. I care about what this says about his character, the character of his boss and the culture of his party.

If we expect our footballers to lead by example, should we not also expect it of our politicians?

I don’t expect our politicians to be perfect. None of us are. But I do expect them, as leaders in the public arena, to at least try to set a good example. To be upstanding. To demonstrate character. Because character matters.

Before the start of Euro 2020, Gareth Southgate, manager of the England men’s football team, wrote an open letter to the country: “Only around 1,200 players have represented England at senior men’s level. Ever. It’s a profound privilege,” he said. “Our players are role models. And, beyond the confines of the pitch, we must recognise the impact they can have on society. I have never believed that we should just stick to football. I know my voice carries weight, not because of who I am but because of the position that I hold. I have a responsibility to the wider community to use my voice, and so do the players.”

The letter was widely praised. But if we expect our footballers to be role models, should we not also expect the same of our politicians?

Only 650 people have the privilege of serving as members of parliament. From that number, only 22 are selected to hold cabinet positions. It is an exclusive group, made up of the brightest and the best, put together to serve the public good and try and solve some of the most difficult problems of the day. Is it too much to expect them to also be an example, to represent their country well, both in their professional and private lives?

The Prime Minister has been telling the press for years that no one cares about his - or any politician’s - private life. Forced to resign by Michael Howard as a shadow arts minister in 2004 after lying about an affair with Petronella Wyatt, he has made it clear that he does not draw any correlation between personal conduct and professional ability, and nor should we.

Something similar has happened in America in recent years. Donald Trump was elected by 80 per cent of white evangelicals, and many of these Christians seemed willing to overlook Trump’s character flaws. There used to be an expectation that scandals, affairs and serious breaches of truth-telling would end political careers. Trump proved otherwise.

In a piece for The Atlantic entitled ‘What if voters don’t care about infidelity at all?’ journalist David A Graham explained this trend. He wrote: “Because the public seems largely unbothered by infidelity, politicians are less likely to show shame; because politicians treat infidelity lightly, the public focuses less on it too. It is literally a vicious cycle: a cycle in which vice is encouraged.”

My MP may only be one in 650. Mr Johnson may feel that he, and all politicians, need carry no sense of responsibility for their actions because the public do not care. But some of us do. Perhaps for religious reasons, because we believe in the biblical command given to us in Exodus 20:14 not to commit adultery. Or because we acknowledge that character permeates our whole lives, professional and personal, and expecting a person to act with integrity in one area while lying to those he is supposed to love most in the world is naïve and unrealistic. Or because we continue to believe, however old fashioned and unpopular it may seem, that those who lead us nationally and represent us on a world stage should do so by example in all areas of their life.

It’s time to make our voices heard. It’s time to tell Mr Johnson, Mr Hancock, and every public leader, that character matters. Christians - and others - are right to care about the private lives of our politicians.