A famous atheist endorsed my book about Jesus

Michael Coren has been trying to break down barriers between atheists and Christians. He explains how his approach is resulting in small victories 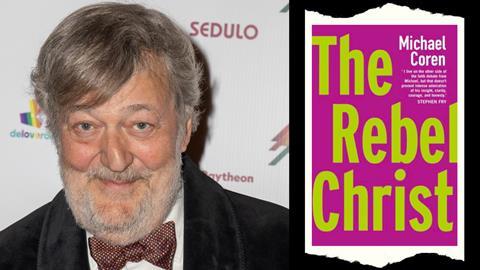 As a priest in the Anglican Church of Canada I spend much of my time performing pastoral work, and trying to live the Christian message. My life is arranged and defined by prayer, belief, and vocation. I also wear my clerical collar much of the time because I want to witness to people that clergy are not as distant or strange as many might assume.

Yet my most recent and unashamedly Christian book, The Rebel Christ, has on the front a quotation from a rather well-known atheist.

“Integrity, wit and passion. A fine advocate for the best of Christian thought and a faith that encompasses the human as well as the divine.”

That person is Stephen Fry, who is regarded as one of the world’s most high-profile atheists.

Here’s something else Stephen wrote: “I live on the other side of the faith divide from Michael, but that doesn’t prevent intense admiration of his insight, clarity, courage and honesty.”

Such respect and friendship is at the beating heart of what I’m trying to achieve. I want to move away from the long-standing paradigm that it’s the role of Christians to explicitly and sometimes aggressively convert non-believers and its the role of atheists to be rude and reductive about Christians.

The truth is that most atheists hold a passive position and are usually quite polite about it. Similarly, us churchy lot are typically too busy trying to work out our own salvation to be antagonistic about other people’s.

In the past I hosted a television show in Canada, and I continue to write for some of the country’s most influential newspapers and magazines. All of these publications are secular and have no specifically religious mandate. Yet the vast majority of what I write, deals with faith.

I’ve lost count of the number of people who write to me to explain how they’re atheists, have no interest in religion, or are even actively hostile to organised Christianity because of what they regard as hypocrisy, homophobia, misogyny, abuse scandals (insert your own often entirely understandable accusation here). But they then continue to say that what they’d just read makes sense to them and they even rather like it.

The funny thing is, all I’m giving them is pretty standard Christian doctrine! On Christmas Eve, for example, in the Toronto Star, one of Canada’s two major serious daily newspapers and with an enormous readership, I concluded my column with: “Put Christian back into Christian values, into Christmas values. Feel for and with others, care for them as if they were family, understand those who insult and condemn you, respect creation, respect people, forgive, embrace, include, and love. Most of all, love. The baby is born, the world is rebooted, and all is now possible. But it takes a great leap of renewal from all of us to complete the picture. Repaint the world. Merry Christmas.”

Here’s a typical response. “I’ve been an atheist since high school. At university some people tried to convert me, and that just made me even more angry. I’m not saying I’m suddenly a Christian but thanks. You’ve made think.”

Two weeks later she wrote again, asking me to recommend a church.

Not all the correspondence is like that, of course, but slow and gradual change is fine by me. Small victories more often than not.

If I can convince an atheist that we’re not as bad as they might have imagined, if I can form relationships and even friendships with them, and if I can bring down some of the walls of separation, I’ve done okay.

Polarisation isn’t healthy and is usually profoundly damaging. Extremes have a habit of growing to resemble each other – if you doubt me, take a look at the intolerance of the hard right and the hard left, and their shared embrace of conspiracy theories and political hysteria.

Mahatma Gandhi spoke of the evangelism of the rose. “Don’t talk about it”, he said. “The rose doesn’t have to propagate its perfume. It just gives it forth, and people are drawn to it. Live it, and people will come to see the source of your power.” He’s half-right, but what a half it is!

I received some wonderful comments for my book from senior Christian clergy and academics, and they’re indeed mentioned on the back. But it’s Stephen Fry who dominates. Yeah, you’ve got me - of course because he’s famous and it might help sales. But for another reason. I want to, need to, reach people outside of the bubble, the echo chamber, the land of the church. As a Christian I refuse to speak of enemies, only of friends whom I’m yet to meet.

Atheists and Christians alike are made in God’s image, and in both we see the reflection of Christ Jesus. Goodness, sometimes I see it shining brighter in those who insist that they reject him! We’re united by our humanity, and divided and failing when we deny it.

Michael CorenMichael is the author of 18 books, a Contributing Columnist for the Toronto Star and a priest in the Anglican Church of Canada. His latest book is The Rebel Christ (Canterbury Press)