After my son died from a drug overdose I wanted revenge. But God has healed my heart

Following the tragic death of his son, Robin Crow began an unexpected journey towards faith 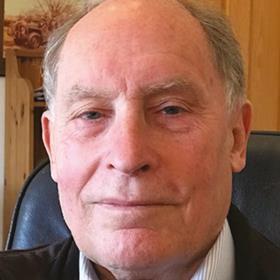 The sudden death of our 25-year-old son Julian from a drug overdose was made worse by circumstantial evidence that he had been injected by a gang of drug dealers. For me, it was the beginning of an angry, dark period when I was overtaken with an all-consuming desire to get revenge and bring the dealers to justice. God was nowhere on my horizon – but then again, as an agnostic, he never really had been.

Four years ago, we received an unexpected knock at the door one Sunday evening.

Standing in our entrance porch, a policewoman told us that our son, hitherto a healthy, strong tree surgeon who loved life, was extremely ill and had been taken to hospital. My wife and I were in shock. What had happened? Where was he found? Was he still alive? Throughout my life, I had not really cared whether there was a God, and I certainly had little time for the Church. But in the back of that police car, I prayed that my son would be alive.

At hospital, we were told Julian had been found without a heartbeat. He had been revived but he stood a remote chance of regaining normal brain activity. He also had kidney and liver failure – the consequences of a massive drug overdose. If he survived, it would be in a vegetative state. We took the painful decision to withdraw his life support.

We moved Julian to a hospice. I prayed for him to return to the fit, able son we had known, saying: “God, I have never really believed in you but if you do exist, please show yourself now.” His strong heart kept beating for ten long days and nights but, eventually, he gave up the fight to live on.

The level of opiates found in Julian’s blood suggested that he had been injected by a third party. My grief was fuelled by anger towards the dealers and towards this God that I had never really believed in. Even at that time, it seemed a strange contradiction to be angry with a power whom I had previously seen as a weak person’s fantasy.

The pain was agonising. Burning with hatred, I sought revenge against those whom I suspected had been responsible. Being a retired journalist, I began to turn Julian’s death into a journalistic investigation. I was in a very dark place.

On the day of his funeral, I somehow found the strength to deliver a eulogy that contained a clear warning to young drug takers. I remember thinking: Where on earth did this strange, positive energy come from? I felt better for it, but I did not allow it to deter me from my mission.

My investigations led me to three local dealers. I tried to speak to them about Julian’s death, but despite it being clear that they knew exactly what had happened, they would not talk. Frustrated with the police investigations, I began to harass these dealers whenever I could. On several occasions I told them that I hoped that their drugs would result in their own demise.

Then one day, when I saw one of them in the street, I felt an unexpected wave of calmness and compassion sweep over me. The hatred and desire to seek revenge had suddenly gone. Instead of the usual abuse, I asked how he and his brothers were coping with life. I felt a transformation. It was as though a heavy weight had been lifted from me.

Since that day, I have met the drug dealers who were with my son when he died several times. We greet each other with civility and I now feel far more compassion towards those who are trapped in the terrible spiral of drug addiction. All hatred has left me.

I started to go to church, initially to bring comfort to my wife, but within weeks I found the church an inviting place. It is there that I find comfort and support. I have been to three Alpha courses and undoubtedly feel the warmth of Christianity. I have taken my first communion.

In total contrast to my past money-orientated life, my wife and I now spend our time helping where we can. One man in his 30s came to our house and cried, confessing that he had been on heroin for ten years. We encouraged him to go to a rehabilitation centre. After treatment, he managed to get a job and we still keep in touch.

I cannot bring Julian back, but I am determined to be more proactive in preventing similar deaths. Drug dealers continue to roam the streets and our children face a very grave danger; addiction can so quickly lead to death. But I have learned that hatred, anger and revenge come from a bad place. Forgiveness, compassion, love and support achieve far more.

I still have a way to go in my journey as a Christian, but I am convinced that God was with me that day when, in the grip of an evil darkness, I was transformed by the light and hope of Jesus.