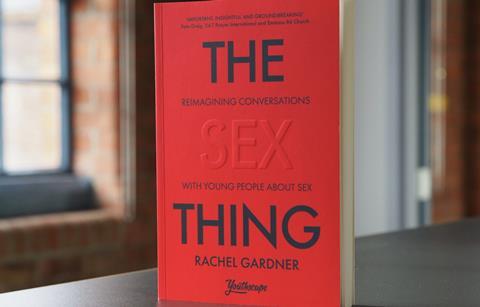 There’s no doubting Rachel Gardner’s pedigree when it comes to talking to teens about sex. As far back as 2005, Gardner was being followed by a BBC film crew as she persuaded twelve teenagers to give up sex for five months. What followed was the launch of the Romance Academy, a Relationship, Health and Sex Education (RHSE) resource that was used by schools, churches and youth workers across the UK.

Gardner is less interested in telling us what she thinks the Bible says on an issue, and far more interested in helping us to critically reflect on our own understanding and ask: “How can I have conversations about sex with these young people that help them grow in their love for Jesus and to be more open to the work of the Spirit in transforming their lives?” Some may find this lack of directive information frustrating, but as Gardner points out, there are plenty of resources out there that do that job. Instead, she aims to create church communities that allows teens to bring their deepest desires, most embarrassing questions and biggest fears out of the shadows and into the life-giving light of Jesus.

Where the Church has historically dictated a hard line to kids that has sometimes driven them away from Jesus and into shame, fear and guilt, we should, she argues, be helping them to explore their Bibles, talk to Jesus and come to their own godly conclusions. All while supporting them to access grace and forgiveness when they (like we) inevitably mess up. If you have ever felt intimidated about giving a ‘wrong’ answer or not being able to explain a complex topic adequately, this should bring blessed relief. It isn’t our job to dictate, says Gardner, it’s to love, pray for and encourage young people as they work this stuff out for themselves with the help of the greatest teacher of all, the Holy Spirit. But this book will really help too.