The Line of Fire 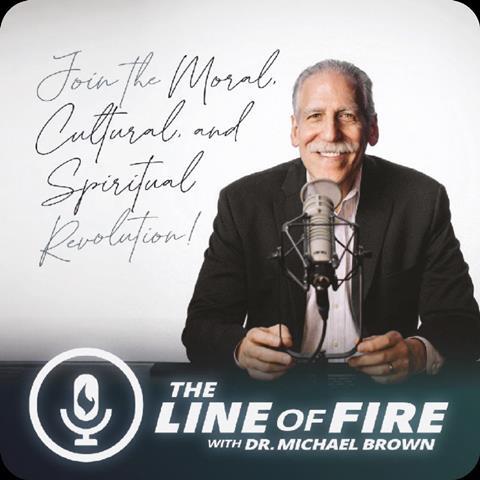 Dr Michael Brown was a drug-addicted teenager in a rock and roll band when he was converted during the Jesus People movement of 1960s America. His experiences led him to a charismatic expression of Christianity strongly connected with his Jewish roots.

Brown himself is a lively and engaging host. You won’t find long, meandering monologues on his The Line of Fire podcast. The style is more that of a radio jock working to keep his audience engaged before the next ad break hits. That’s no surprise, as the podcast exists firstly as a daily radio show, which has been broadcasting on Christian radio networks in the USA for decades.

The show mainly consists of Brown sharing his thoughts on theological, cultural and political topics (the tag line is: “Join the moral, cultural and spiritual revolution!”). Episodes usually involve live listener calls, with Brown acting as a Bible answer-man to their spiritual and theological questions. Other guests aligned with Brown’s theological and cultural worldview also feature regularly on the show. Episodes are usually around 50 minutes long and, since the show airs every weekday, there are lots of them.

Brown’s own politics and theology lean towards the more conservative end of the spectrum, and the show’s talking points tend to revolve around evangelical scriptural questions or USA culture wars. A lifelong supporter of Israel, Brown is a strong advocate for Messianic Judaism too. Recent shows have tackled the ‘apostasy’ of those falling away from evangelical Christianity, Biden’s administration and the failure of those who prophesied Trump’s return to power.

But Brown shouldn’t be pigeonholed as just another right-wing American pundit. As a strong believer in revival and prophecy, he’s been directly involved in some of the most well-known US charismatic revivals of past decades and believes God will work again through such events. He has made friends across doctrinal lines and is as at home talking with charismatics of the Bethel variety as Calvinists from The Gospel Coalition. He’s also willing to have open and friendly debate with those he disagrees with, such as Catholics and progressive Christians.

Inevitably, he comes with a particular conservative charismatic perspective but Brown is a theologically well-informed and accessible voice and (in this reviewer’s opinion) usually steers a sensible line on matters affecting his own constituency. Naturally, those listeners who take a different view from him on the place of Israel and US politics may disagree with some of his conclusions.

The Line of Fire podcast will mainly appeal to those with at least a passing interest in the issues of the US Church, culture and charismatic Christianity, which the episodes often revolve around, and you’ll largely only hear Brown’s own perspective on them. But with five decades of wide-ranging ministry in the USA, Brown can lay claim to being an authoritative voice and many are choosing to listen to him.

Download The Line of Fire along with a host of other Christian podcasts at edifi.app/podcasts