Daughters of Eve: This documentary exposes misogyny in the Church

Daughters of Eve offers a fresh look at the truth about how God sees and values women, says Chine McDonald. It deserves an audience far wider than just those who are already critical of the Church’s patriarchal past

In the Church world in which my faith was formed, much of the teaching about women – either explicitly or implicitly – was that we were inferior; second place in God’s plan for humanity. Women were blamed for the Fall, for causing men to sin because of the clothes they wore; there was a dangerous and pervasive belief that women’s bodies were owned by men.

But Christian women – writers, thinkers, theologians – have for many years been reclaiming the truth about how God sees and values women; truths often masked by the patriarchal norms in which the Bible has been understood and translated. What has been uncovered is a liberating truth that had been hidden from many of us.

Daughters of Eve is a beautifully-crafted hour-long documentary that aims to enter into this exact conversation, analysing and dismantling the misogyny and gender hierarchy within the Christian faith. Steered by its director, Zanah Thirus, it is full of interviews with experts, thinkers and theologians who love the Church and dig deeper into the Bible’s stories to reveal truths about women that are freeing rather than constrictive. In each chapter, new experts enthusiastically share the revelations that they have come to through deeper engagement with scripture and scrutiny of the cultural contexts in which the biblical narratives about women arose.

Daughters of Eve Trailer from Zanah Thirus on Vimeo.

Each chapter of the film is illustrated, with art, music, painting, ballet and classical and choral music performed in the background, as the creators and contributors take us through a number of themes. From rethinking the portrayal of Eve to early Church misogyny to sexual violence and purity culture, it tackles provocative questions and asks viewers to see women in the Bible through a different lens. For example, in a chapter asking whether Jesus was a feminist, Rev Stephanie Shines says that Jesus deliberately showcased female disciples, including Phoebe and Mary Magdalene: “In a time where women were almost silent or invisible, scripture affirms and celebrates women. Women were a part of Jesus’ teaching, a part of his life. Women were here for all of it… The radical part was that Jesus got to choose who was in his circle.”

Despite these positive readings of the Bible and women, Daughters of Eve does not shy away from the problematic verses in scripture. For example, 1 Corinthians 7:4 (“The wife does not have authority over her own body, but yields it to her husband.”), or later on in the same book in chapter 11:7: “A man ought not to cover his head, since he is the image and glory of God; but woman is the glory of man.” But the all-female cast of experts explains such passages as, in part, being due to the misogyny that existed in the wider cultural context in which the Bible was written. This leads one of them to declare that it’s because of this context that “Paul was a bit misogynistic in his views of women and what women’s places in the Church were, and what they should be doing” – a view that many in the Church would disagree with. But, as one commentator puts it: “These were human beings, who were writing and living these texts.”

A spotlight on women

In films such as these, it is easy to focus solely on the critical and the negative. But the end of the film is intentionally hopeful, with the final ‘chapter’ showcasing the “incredible women of the Bible”. Here we are reminded of the familiar female biblical heroines, including Esther and Rahab, but our attention is also drawn to the lesser-celebrated such as Phoebe, Lydia and the daughters of Zelophehad, whose story is told in Numbers 27. These five unmarried women were orphaned when their father dies as they enter into the promised land. Despite the cultural norms of the day, they demand their inheritance and in this story, God tells Moses to give them what is theirs. 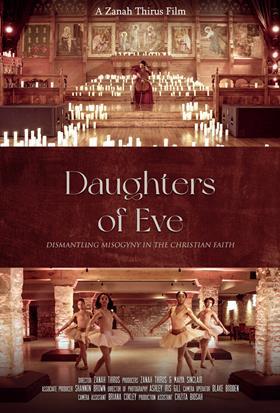 Despite this beautifully-made passionate film, the danger with such projects is they risk preaching to the converted only. How will Daughters of Eve reach beyond those who are already critical of the Church’s misogynistic past?

What I know, however, is that my teenage years as a Christian would have been profoundly impacted if Daughters of Eve existed when I was growing up. As its director Zanah Thirus says: “This film is for my younger self… I want women to find their voice in this film.”

Daughters of Eve is available to rent online now