A Burning In My Bones - Winn Collier 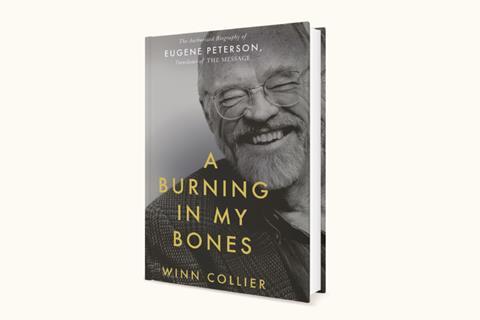 The authenticity of Eugene Peterson’s walk with God is what makes this book so compelling. He had all the struggles and temptations common to man, yet an inner, burning desire for God and a long obedience to him. Winn Collier was given free access to Peterson’s prayer journals and I found myself drawn in by the open vulnerability they revealed. Peterson was totally real with God and with other people.

His grounding in academic brilliance and hard pastoral experience is what allowed him to express the essence of the original scripture in colloquial American. His theology was earthed in real life and his now famous Message translation of the Bible connected with everyday people.

Peterson was brought up at Kalispell, near Flathead Lake in Montana – a place he described as having “a sacred beauty”. In the midst of increasing recognition from his writing, he refused to become a celebrity, eventually settling there again in his final years to pray and write in the place he felt at home. He and his wife were hospitable but avoided attention, preferring a quiet life and “the unforced rhythms of grace” – to use his memorable words.

In the tribal – and sometimes polarised – world of American Christianity, Peterson was astonished that he was accepted by so many various groups that do not accept each other. He believed ambiguities in scripture are deliberate on God’s part saying: “Language is ambiguous, and especially ambiguous when it employs metaphors, which the biblical text does in spades. It wouldn’t be good to be too sure of ourselves.” Wise words indeed that could help us all avoid polemics and schisms.

This is a very well-written, sensitive and intimate portrait. You might plan to read it one chapter at a time, but in the end I found I could not put it down.