Charlotte Gambill: How leaders can use 'Flour Power' to resolve conflict 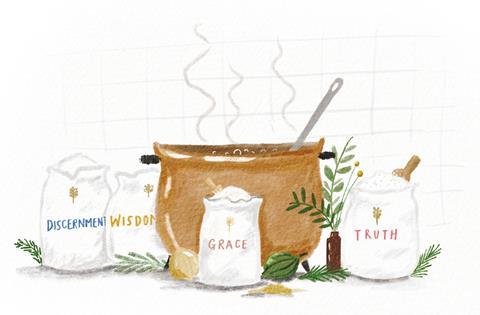 Conflict is inevitable when we are leading people.

Disagreements and misunderstandings are part of the terrain we must navigate, yet often it is our lack of discernment that can cause a minor incident to become a major accident.

I’ve always been fascinated by the story in 2 Kings 4:38-41, where Elisha instructs the young prophets to make a stew, but an overeager student throws in some wild gourds that contaminate the pot. As the prophets begin to devour the stew one of them shouts: “Man of God, there is death in the pot!” (v40).

When it comes to conflict, the escalation often begins because we fall at this first hurdle. When we know something is off in the atmosphere, or we sense a wrong agenda or jealous spirit, we ignore the poison because we would rather remain popular than be the one to point out the pollution.

We don’t want to address the ‘death in the pot’ at the risk of being offensive to someone who may have placed it there, whether deliberately or carelessly. So we continue to allow people to eat from what we know is contaminated, allowing them to get gradually sicker as what needs correcting continues to be ingested.

Yet this prophet called attention to the poison, and in doing so created a moment that was no doubt awkward, but allowed the problem to be resolved. Elisha didn’t delay but stepped immediately into the situation. He didn’t interrogate the prophets to find who put the wild gourds in.

He didn’t waste time in conversations that wouldn’t bring resolution but only compound the confusion. He didn’t throw away the stew and waste what everyone had worked hard to produce. Instead, he took some flour and threw it into the pot, which neutralised what was bad and made the stew good again.

Every time I read this story I pray: “Lord, teach me as a leader how to add flour to any potential poison.” I have sadly seen entire projects and teams disbanded because no one was carrying flour. Conflict erupts, accusations fly and unkind words are spoken; the stew is wasted and everyone goes hungry. In any conflict we must decide what our focus will be. If we focus on the poison, we can lose sight of the purpose.

Elisha’s focus was on the hungry prophets he was responsible for feeding. He wasn’t going to allow the death in the pot to ruin what he could resolve. He was on an assignment and the poison was a distraction, so his actions were immediate and effective.

When we allow the flour of discernment, grace, truth and wisdom to enter places of conflict we begin to neutralise lies, as well as silence the saboteur that seeks to waste our time, energy and resources. As leaders we have to learn to “fight the good fight of the faith” (1 Timothy 6:12).

You don’t have time to be in the wrong disagreement, fighting people who are more interested in spreading poison than removing it. We need leaders who are committed to the whole pot, not just their portion – leaders like Elisha, who don’t allow poison to be magnified, but instead make sure it is neutralised.

Where do you need to deal with the ‘death in the pot’? Identify it, add the flour and carry on feeding those God has entrusted to you. Fight the good fight, because life is too short for anything less.

Charlotte GambillCharlotte Gambill is an international speaker, teacher and author who has been in church leadership for 28 years. She mentors leaders across the world through her course ‘The Collective’, and is the teaching pastor at Church of the Highlands, USA.