Why the Last Rites matter

Following reports that Christian MP Sir David Amess was denied access to the Last Rites, Peter D Williams explains why the ritual is so important for Catholics, and adds his voice to those calling for a change in the law 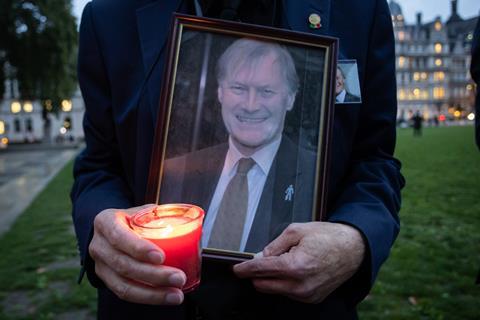 It is a testament to the late Sir David Amess that he was well known for being a Christian. Every obituary after his murder last Friday made a point of mentioning his faith, and the public witness he gave to it.

It was because of his well-known faith however, that scandal was given by the reported refusal by the police to allow the local Catholic Parish Priest, Fr Jeffrey Woolnough, who arrived on the scene of the murder and was a friend of Sir David’s, from giving him the Last Rites due to concerns to maintain the integrity of the crime scene.

To see why this matters, you need to understand why this is so important to practising Catholics like Sir David.

When Catholics talk of the Last Rites, we mean the sacraments given to a dying person so as to give them fortification in their ending moments, forgiveness of sins, and peace. The first of these is called the ‘Anointing of the Sick’, also known as ‘Extreme Unction’. This is the anointing of those seriously sick or near to death by blessed oil, and is meant to convey God’s grace, strengthen the believer in the Holy Spirit, and impart peace and fortitude against temptation and anxiety.

This sacrament is described in the Letter of James, when the Apostles says, “Is any among you sick? Let him call for the elders of the church, and let them pray over him, anointing him with oil in the name of the Lord; and the prayer of faith will save the sick man, and the Lord will raise him up; and if he has committed sins, he will be forgiven (James 5:14-15, cf. Mark 6:13).

Also included in the Last Rites can be confession (John 20:22-23) if there is time, and Holy Communion (referred to as ‘Viaticum’, a Latin word meaning “provision for a journey”).

The purpose of almost two millennia of practice is that, having received forgiveness of sins, the dying person is then sent to God having received Christ in the Eucharist to travel with him on his journey to heaven. For someone like Sir David Amess then, receiving the Last Rites after a vicious attack would be important, and comforting for his family, also. That he was denied this is deeply troubling.

We have to be balanced in our assessment of the situation, and avoid rash and unhelpful long-distance judgements of the police at the scene who made this decision. Despite some sensationalising reportage, Fr Woolnough himself did not instigate outrage in the media, and said that he respected the police’s decision, choosing to pray a Rosary outside with a parishioner rather than push the point further. We do not know whether Sir David Amess had died by the time Fr Woolnough got there (though we never quite know for certain when death takes place, the sacraments can only be received by those who are living).

Nonetheless, questions can and should be asked as to whether it would have been possible for Fr Woolnough to give Last Rites to his dying friend. On the face of it, it seems like it may have been no less possible for a priest to give sacramental healing to Sir David, at least in a limited form – anointing of the sick need only involve the forehead – than for paramedics to give him physical healing. It is also entirely plausible, given the pervasive profound illiteracy concerning religion in our society, that police on the scene had no appreciation of the importance of the Last Rites to Sir David as a Catholic, and that thus ignorance prevented what would otherwise have been possible. Still, the facts of the situation have to be appreciated in full before any such analysis can be made.

What we can say is that the police can and should be as reasonably accommodating as possible out of respect for Christian victims of vicious crime. Catholic MP Mike Kane has proposed an ‘Amess amendment’ to the Police, Crime, Sentencing and Courts Bill currently going through the House of Commons, which would ensure that Catholic priests can administer the Last Rites at crime scenes, and hopefully lead to guidance and training for the police in this regard.

This seems a proportionate and right move, and hopefully the wider debate that has occurred has given a salutary wide reminder of the importance of accessing the means of God’s grace at the end of our lives.

Bishop Mark Davies of Shrewsbury issued a statement in which he expressed his hope that “better understanding of the eternal significance of the hour of death for Christians and the Church’s ministry as an ‘emergency service’ may result from this terrible tragedy”. If this hope is realised, it will be another example of how, even through the darkest and most tragic circumstances, the Lord works all things to the good of those who love him (Romans 8:28).

Peter D WIlliamsPeter D. Williams is a Catholic apologist and author, and a speaker for Catholic Voices