If we’re looking for biblical examples from which to glean hope and wisdom for a royal reconciliation, it’s Jacob and Esau we must look to, not Cain and Abel, says George Pitcher 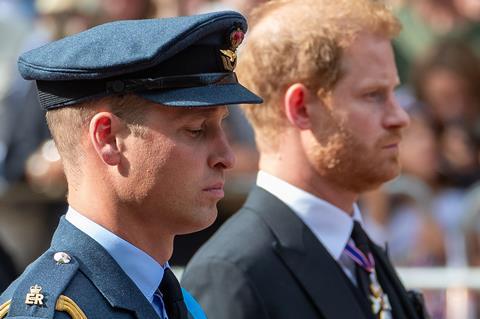 Scripture offers plenty of sage counsel for the settlement of the royal family’s blood feud between the Duke of Sussex and the Prince of Wales – in tabloid terms, Harry and Wills respectively.

James Mildred provided his own exegesis, arguing powerfully that the Bible’s epistles expound an irresistible theology of universal inheritance of the Kingdom of God.

No spares, therefore, only heirs. I would only add that the Anglican Church has, since the 17th Century, concluded its Eucharist with the statement that we are: “heirs through hope of thy everlasting kingdom.”

The primacy of conscience isn’t painless. But the redemption of contrition and forgiveness is worth it

But I’d like to go rather further back, to the first book of the Hebrew Bible, Genesis, to find some serious sibling rivalry. There’s Cain and Abel, of course. But, while William may have cause to mutter Cain’s rhetorical question: “Am I my brother’s keeper?” (Genesis 4:9), the murderous fratricide at the heart of that story surely rules it out as a guide for the troubled Windsor boys.

In any event, we must pray so.

The story I’d like to revisit comes later, and it’s the story of Jacob and his twin brother Esau (Genesis 25:19-34; Genesis 27:1-45). The brief synopsis goes that Jacob swindles his brother out of his birth right by fooling their father, the visually-impaired Isaac, into giving him his brother’s blessing, through the basic trick of donning animal skins (Esau was “a hairy man”) and pretending to be his brother.

Unpacking the story as we go along, it’s probably best to dispose of the whimsical similarities to William and Harry first. They don’t mean anything at all, but they’re fun:

Esau is not only hirsute, he is a red-head. So is Harry. In his book, Spare, he is disproportionately proud of the fact that he is far from as follically-challenged as his elder brother, William. As I say, there is nothing to be made of this coincidence of coiffure, only perhaps that this preacher can observe, along with the author of Ecclesiastes, that “all is vanity.” (1:2).

But there are more serious comparisons. We can start with the injustice of Jacob being the winner who takes all after dishonestly diddling their father. Injustice and dishonesty are the main charges that Harry seeks to make against his family. Sometimes over serious matters, such as allegations of racism against his wife; sometimes less seriously, over the relative size of bedroom allocations.

Jacob, the corrupt brother, is the one who flees his homeland to protect himself. He marries Rachel (who, interestingly enough, has a dubiously behaved father) and lives abroad. But he’s aware that, one day, there has to be a reckoning with his brother.

There is an issue of historicity to deal with here before moving on. Rachel is highly manipulative, turning Jacob against her father, Laban, and stealing some of her father’s treasure because (issues of inheritance again!) she feels hard done by. And it was Jacob’s mother, Rebekah, who first came up with the idea of defrauding Isaac, her husband and Jacob’s father, of Esau’s birthright.

Jacob risked himself, emotionally and physically, to be reconciled with brother

The resonance of the tropes of scheming wife and wicked (step)mother are too loud to pass by. The patriarchy that portrayed Rachel and Rebekah as such is not so different from the misogynistic perspective of tabloid journalists who blame the women (Prince Harry’s wife, Meghan, and Queen Camilla) who marry into the Windsors for all the trouble today.

The temptation is to say that nothing changes.

Ultimately, though, the narrative of our Bible is redemptive. Genesis 32-33 tells of Jacob travelling back towards his wronged brother in Canaan, sending gifts of livestock ahead of him, in the hope of appeasing his twin’s rage.

It works. Esau greets his long-lost brother in an emotional reunion. And we can reasonably conclude that this wasn’t simply about Esau’s inflated headcount of cattle and sheep.

Jacob risked himself, emotionally and physically, to be reconciled with brother. Esau values his present and future blood bond over the wrong he was done in the past. This is about forgiveness and its ensuant redemption. But it’s also about hope, that there may yet be a healing for the bitter wounds that separate William and Harry.

On the night before his remedial confrontation with Esau, Jacob wrestles with an angel of God, whom we can take to be his conscience, or even God himself. In the struggle, the angel dislocates Jacob’s hip, a rather more serious injury than Harry suffered from his altercation with the dog bowl when William became physical with him.

It’s a reminder that the primacy of conscience isn’t painless. But the redemption of contrition and forgiveness mean it’s worth it.