The Pope’s apology for past sins in the name of ‘mission’ was a good start. But evangelicals need to change too 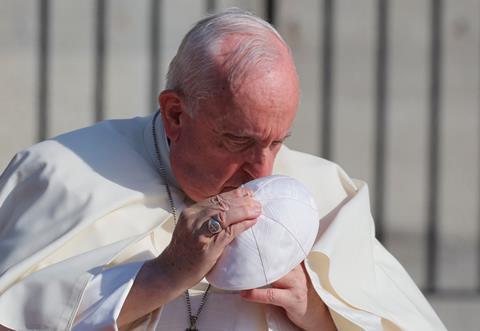 Pope Francis’ recent apologies to Canada’s First Nations was a good start to correcting the egregious wrongs done to many indigenous peoples in the name of “Christian mission.”

In addition to the many pure-hearted, sacrificial missionaries, for centuries there were other Westerners who went around the world with a narrow and reductionist view of the gospel that was infused with cultural superiority. Others feigned a missionary enterprise altogether in order to advance an unfair political and economic advantage. Certainly good emerged from this work, but the downside is that some Western Christians managed to seriously damage many indigenous cultures, customs, perspectives and leadership.

This was antithetical to the gospel of the New Testament, which envisages the message of Jesus as always contextualized. It’s time for the whole Church to apologise for these social sins and to make sure that we have thoroughly learned from errors of past centuries.

True Christian mission is never about forcing people to join a religion or adopt a culture. Nor is it simply about externally converting people and checking them off a list of those going to heaven after they die.

While the broader evangelical world rightfully recognises the heroes of faith who gave their lives to take the gospel of Jesus across the globe, we must also recognise some of the sins that accompanied our global missions. Too often Christians have imposed our cultural Christianity through political and economic power and profited from colonialism rather than from calling out the wrongs and racism of colonial structures.

Christians have too often profited from colonialism

Political power, according to the great reformer Martin Luther, makes what is right wrong and what is wrong right.

But a true theology of the cross of Jesus Christ states the problem for what it is, acknowledges the sin, and works to find correction and forgiveness.

The church of the global south, where I live and minister, was blessed by the Christian missions of the past who brought the message of Jesus, who loved us fully, served the poor, eradicated illness, built schools, codified languages and provided fresh drinking water. Thus, the so-called campaign for reparations is an inadequate solution to genuine repentance and reconciliation. In our obsessively commercialised world, we fail to realise that money cannot solve these problems. And after all, how far back does one go? What of India’s dalits whose ordeals go back thousands of years? Will the upper caste make reparations for millennia of exploitation? Is it even possible?

Yet, just because this solution isn’t practical, or even advisable, it doesn’t mean we can wash our hands of the necessity to do something to restore what’s broken.

A couple of decades ago, about 700 low caste leaders accused the Indian Church of participating in caste racism. At a national event, I felt compelled to accept my part and ask for forgiveness and I requested time to put things right. It was a powerful, impactful experience for me and for them. Today, we are still working together to make things right, but the key word here is together. It is a long long process.

To apologise, we must first acknowledge the shortcomings, both past and present. For example, do global Christians understand that using a term such as “discipling a whole nation” is often viewed in countries such as India as being political, an effort to turn India into a Western lackey?

This kind of evangelical sloganeering - “reaching unreached people groups” is another example - is deeply problematic. Why is it that only people living outside the Christian West are among the unreached, or represent a nation to be discipled? This leads to the absurd assertion that there are Western examples of whole discipled nations.

Can we also accept that some ministries in developing nations carry out projects funded by the West to meet fundraising expectations, and not due to a deep biblical understanding of Jesus’ mission of love and mercy in the context of those communities?

Christian leaders in the global south have also failed. The people we live among are not hostile to Jesus, but they are hostile to what they see as a Western religion. We have not listened to our own people. Even as an Asian, I cannot simply say the West is responsible for the problems. I must acknowledge that as part of the global Church, these are my sins, too. I apologise for them.

With today’s global communications, where every sin against humanity is amplified, anything short of a collective acknowledgement of social sin is simply inadequate. The Pope’s apology should be the beginning, not the end, of finding our way through history’s errors together.