Despite a prominent atheist being platformed and a distinctly un-Christian comedy and music line-up, God was present at Greenbelt festival, says Rev Nathan Jones 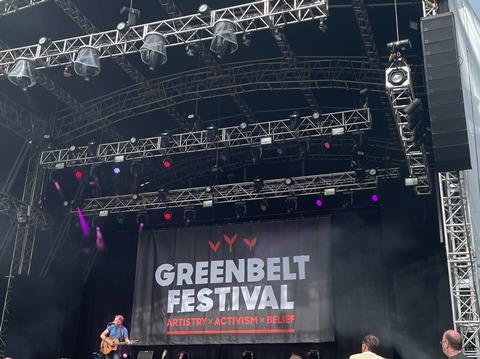 “Richard Dawkins is speaking there?! It used to be a Christian festival.”

In the lead-up to this year’s Greenbelt I read a number of similar sentiments online, ranging from sanctimonious sadness to anger that a festival set up 50 years mainly to showcase some Christian rock music should now be inviting the UK’s most prominent atheist to share his thoughts.

“It used to be Christian” isn’t exactly a new criticism aimed at Greenbelt, and, as ever, I heard plenty of mainstream Christian teaching over the weekend, from John Bell to Robert Beckford, Giles Fraser to Rowan Williams. If Guvna B is your kind of thing, you could’ve heard him on the main stage. If you prefer Taize, there was a beautiful service led by some fantastic musicians.

But for me, Greenbelt’s Christianity isn’t at its brightest in those places. Nor is it brightest even in the annual Sunday morning communion service, where we broke bread, drank juice, and sang the most traditional Christian hymns.

Greenbelt is a festival on the fringes, and that means it’s a festival for those on the fringes. As a result it draws in acts from the peripheries. On Saturday evening I found myself listening to a singer-songwriter called Beans on Toast, who walked on stage and immediately announced that he and his band had come straight from another festival, and that he was already drunk. He proceeded to sing a song with a line about how much he disliked organised religion, then one about taking ecstasy at a festival. “You wouldn’t get this at New Wine”, I joked to my wife.

But as his set progressed, it became apparent why he’d been booked. “I sing positive songs about the good things in life”, he said (or words to that effect - I’m paraphrasing). “There are enough songs about what’s wrong with the world, so I write songs about what’s good.” Soon after there was ’Take your s*** home’, a song about the detrimental environmental impact of festivals, before which he remarked that he judges festivals by how much rubbish there is on the floor, and on that metric, Greenbelt was the best he’d ever seen – cue huge cheers from a crowd of environmentally-conscious activists.

And then, with one song to go, he walked towards the mic, paused, and said: “When I found out this was a Christian festival I didn’t want to take this gig. When I was booked I said ‘Are you sure you want me?’… but this is an amazing place. Thank you.”

The following evening I was back at the same venue for a comedy gig. One of the comedians, Chris Brooker, said that he’d only found out that it was a Christian festival 30 minutes earlier, and that he was censoring his set as he was going through. But he was totally won over, and ended up abandoning his planned material to tell us about his worst gigs, and why this one was so much better.

Fast forward about 16 hours and I’m at the main stage, where Jeffrey Martin, an American singer-songwriter, is saying, “This is my first time here, I’ve just arrived, and even just walking through the campsite I can feel that there’s something different about this place.” I saw him perform again in the evening, where he said that he already felt Greenbelt would be an annual pilgrimage. “If you’ll have me”, he said. “I’ll do anything… I’ll clean the toilets.”

In the Old Testament book of 1 Kings there’s a story about a man called Elijah. He’s hiding because he’s fearful for his life, because he has been telling the people about God and it hasn’t exactly been well-received.

Greenbelt may not shout its Christianity in the way some wish it would. But during the weekend, throughout the site, sometimes in the unlikeliest of places, God was definitively, tangibly, moving, even if it was in a gentle whisper.

Rev Nathan JonesRev Nathan Jones is the senior minister of Oasis Church Waterloo and leader of Oasis Hub Waterloo, a charity committed to radical local community transformation. He spends as much spare time as possible playing sport or guitar, but as the dad of two kids, this amounts to not a great deal of time. He would give almost anything to see Wales win the Rugby World Cup.