In defence of Justin Welby

The Archbishop of Canterbury has been attacked for using his Easter Sunday sermon to lash out at the Government immigration plans. But George Pitcher believes the critics have misunderstood Welby’s message 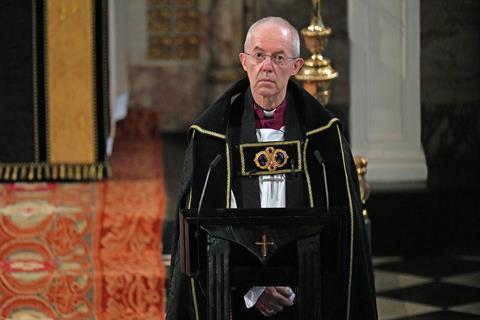 The Archbishop of Canterbury condemned plans to send tens of thousands of asylum seekers to Rwanda, saying the policy did not stand “the judgment of God”. Photo: REUTERS

When archbishops speak out, broadcasters invariably come to Anglican low-life like me to be a burnt-offering in their defence.

So it was when Archbishop of Canterbury Justin Welby delivered his Easter sermon on Sunday, weighing in to the widespread condemnation of this Government’s plan to send asylum seekers to Rwanda, which would be laughable if it wasn’t so horrid (which I’ll come to in a moment).

First, I was invited onto GB News on Easter Sunday to talk about it with Alastair Stewart, which was insightful and thoughtful, and onto Kevin O’Sullivan’s show on talkRADIO on Bank Holiday Monday, which also reflected its brand values by being belligerent and inflammatory.

Under these circumstances, it’s always worth checking what the primary (or primate) source actually said. I imagine the number of armchair letter-writers who have actually read the sermon can be counted on the fingers of a single gargoyle. So allow me to oblige.

Welby opened, touchingly, by equating the despair of refugees, whether from Syria, South Sudan, Afghanistan or Myanmar with the darkness and despair with which the first women went to Jesus’s tomb as soon as they could after his crucifixion. What all these people have in common is, he said, that “the end of their world has arrived”.

This has widely been interpreted in the broadcast realm (though not, I should make clear, by GB News’s Stewart) as Welby presuming to speak for God.

True, some clerics do that. There’s the apocryphal story of the pompous dean who opens his sermon with the deathless words: “Jesus said – and I agree…” But that’s not what Welby is doing here. He is comparing the judgement of politicians who seek to ship asylum-seekers offshore with the Easter-morning judgement of God, which takes our bloodied grave clothes and offers an indestructible hope, with a resurrection that “promises each nation, and every victim and survivor, that the injustices, cruelties, evil deeds and soulless institutions of this world do not have the last word.”

And that’s what Christians are called to stand up for. Not to shrug and say it’s someone else’s problem. But always – and, we hope, every time – to stand in the corner of the dispossessed and the vulnerable, the oppressed and persecuted, the poor, the hungry and the lonely. And if there is just one of those among the refugees that arrive on our shore, then our judgement must be to take responsibility ourselves and offer refuge.

That’s not talking for God, it’s talking about God. More specifically, in theological terms, it’s aspiring to act in the world as God in the risen Christ did on Easter morning.

That’s not something that this Government’s leadership has the bandwidth to address. Instead, it goes for something well beyond classic “whataboutery”, trying to turn Tory critical attention back onto its easy, knee-jerk targets, the Church and the BBC. The early editions of Wednesday’s Daily Telegraph ran with what the prime minister told his MPs behind closed doors on Tuesday evening: ’BBC more critical of Number 10 than Putin.’

The Church may be reticent in defending its line, but the anger within the BBC was palpable. The Today programme presenter Justin Webb put this killer question to Boris Johnson’s duty human shield, junior minister Paul Scully, at a little after 8.20am on Wednesday: “Can you come up with an occasion when Boris Johnson has put his life on the line for the truth as Jeremy Bowen has, as Lyse Doucet has, as Clive Myrie has?”

Webb may not have intended it, but there’s Good Friday and Easter in that question too. Needless to say, Scully feebly prevaricated, channelling Pontius Pilate’s “What is truth?”

That’s because this Government no longer has answers. It’s why Priti Patel, the UK’s home secretary, defends her Rwandan adventure simply by asking if anyone has a better plan.

I promised at the start of this to say why the Rwanda plan is so horrid. So let me briefly finish with that.

Firstly, it is exilic. The point of exile, as recorded in the Hebrew Bible in the persecution of the Jewish people at the hands of Egyptians and Babylonians, is humiliation and objectification. It seeks to dehumanise peoples, to objectify and commodify them. Yes, it’s the same as trafficking slaves.

Secondly, it reveals the belly of the beast of far right-wing politics. For the kind of people that Johnson and Patel want to keep onside and away from beckoning hands of the likes of UKIP, the atlas from Afghanistan to Syria, to Ukraine and Rwanda, is “Bongo Bongo Land” (copyright: Alan Clark, Godfrey Bloom and, indeed, Boris Johnson). It’s that the citizens of such places are essentially inferior to us and must be kept where they are, even if where they are is thousands of miles away from their homes.

Thirdly, Rwanda is all about being out of sight and therefore out of mind, subcontracting British responsibility to humanity, as Welby observes. It’s difficult to think of anything less emulative of the Easter story, in which the divine reaches into the darkest experience of humanity, shares it and participates in turning it around into something wonderful.

That’s a bit blunter than the way the Archbishop put it, but I hope it’s what he meant. It’s also why, to paraphrase Johnson’s words about Vladimir Putin and turn them on his own woeful presence in and contribution to our public policy, it’s why he must fail – and he will fail – in his hideous and barbarous assault on our values.