‘I was heckled in church for being a woman, but I didn’t let it stop me’

When 12-year old Becky Murray read from the Bible in her church, a man stormed out. Decades later, despite speaking to politicians and at conferences around the world, she still says it’s a man’s world 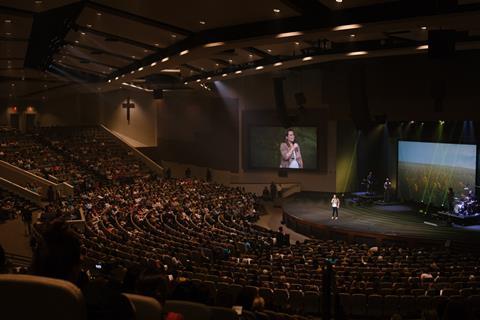 My big moment had arrived – my first ever time reading the Bible from the pulpit in front of a packed church. I was just twelve at the time and my pastor saw some potential in me and wanted to give me a chance to contribute. I was excited and nervous but extremely grateful for the opportunity. And then my worst nightmare happened…

“This is disgraceful, I’ve not come here to listen to a woman,” an angry man shouted as he stormed out of the building. You could cut the tension with a knife. I wanted to burst into tears. Thankfully, my pastor remained calm, asking me to pause while he publicly rebuked the man. He then invited me to continue with my Bible reading.

Thankfully, the incident didn’t deter me. Since forming my own charity, One By One, a decade ago, I’ve had the privilege of speaking at churches, conferences and events across the world. I’ve spoken to large TV and radio audiences and, in 2019, was invited to the Houses of Parliament, where I addressed government ministers and MPs.

But I still think, when it comes to public ministry, it’s very much a man’s world. Women have to work twice as hard to get opportunities and it’s taken me years for my platform capabilities to be taken seriously. I still stand out like a sore thumb on conference posters, where I’m often the only woman on the bill. I’ve lost count of the number of times pastors have ignored me during a conversation and spoken directly to my husband. Recently, during a theological debate, one man told me: “If they allow women in the pulpit, what will be next? It’s a slippery slope.” Who knew that being a woman was so offensive?

There’s much to be done and we need every hand on deck. Men and women

Thankfully, there are also many men willing to cheer women on. In my 20s, I attended a church service where a visiting preacher from America, Cleddie Keith, was speaking. I was minding my own business when he approached me, called me to the front and put a microphone in my hand. “Preach,” he yelled in his Texan drawl. It was utterly terrifying but, as I fumbled through a five-minute testimony, I found a boldness I didn’t know I had. It was a baptism of fire that set something in motion in me.

God has a plan

There are theological arguments for and against women in the pulpit. I’m not here to address those today - I’ll save that for another time - but I do want to encourage women. God has always used females in powerful ways. Whether it be Deborah, Ruth or Esther in the Old Testament or females in the New Testament, God has a plan for women! After all, the first person to witness the resurrection of Jesus was a woman.

So girls, keep going! Don’t let discouragement stop you. Don’t let negativity hold you back. You have a voice, a purpose and a call from God. It’s absolutely his will that you should be used in incredible ways. God alone will decide your future, so jump right it in and see what he has planned for you.

In 2016, I launched the Dignity Project. We teach girls about the dangers of sexual abuse, provide them with practical resources, such as reusable sanitary pads, and speak life into them. We tell them that they have an incredible future and that God will use them in powerful ways! The Dignity Project has now reached 19,000 girls across the world, in countries such as Pakistan, Kenya, South Africa, Sierra Leone, Brazil and India.

To those men who do encourage women: we need you more than ever. Pastors, if you see a girl in your congregation with God’s hand on her life, believe in her, champion her and celebrate her. Don’t be afraid of the reaction. My pastor took a bullet for me and look what followed.

As it says in Joel 2:28: “And afterward, I will pour out my Spirit on all people. Your sons and daughters will prophesy, your old men will dream dreams, your young men will see visions.” Those days are now. There’s much to be done and we need every hand on deck. Men and women.