Six million people could lose their British citizenship under new government proposals. But God tells us to welcome others, just as we were welcomed into his family, says Tim Farron 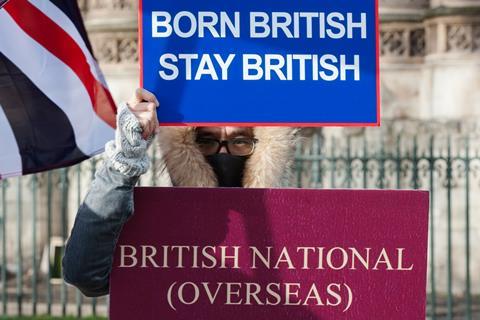 With all the noise over Christmas parties that shouldn’t have happened last year, and that may or may not be happening this year, most people may have missed the nationality and borders bill which passed through the Commons last week.

Among the things that this bill will do is to give our government the power to remove British citizenship from nearly six million British dual nationals – and to do so without warning, for “any reason”, and without even contacting the person involved. Ministers will, understandably, say that they would only ever use this power in rare circumstances where a person has done something appalling. Yet the new powers mean that they can, potentially, pretty much include anyone.

Just think about this. If I did something utterly appalling, I might get sentenced to life in prison. But the government wouldn’t take my citizenship from me. Why? Because I’m a British citizen with a British family heritage for as far back as I am aware. But those people whose family have not been in the UK as long as mine may no longer be afforded the same rights that I have. The government has basically said that someone whose family migrated to the UK is less British.

When we look at our Bible, we know that our God considers no one to be a non-person. Every hair on your head is numbered. You are of infinite value to the God who created you; he knows you inside and out. He died for you. No one has the right to tell you that you are no-one.

Christmas tells us that our God chose to be born on the outside. Literally born to a marginalised young woman, unmarried at the time of conception who, with her new husband, was then forced to flee; a refugee family, running from the murderous attention of a king. Three decades later, this child would become the ultimate outsider – rejected by the people, betrayed and deserted by his friends, taken outside the city walls and subjected to crucifixion – a form of execution meant not just to kill you but to expose and humiliate you as you suffer publicly without pity.

God knows exactly what it is to be excluded. Next to him hung others who were excluded – two thieves. Grievous and utterly excessive though their punishment was, nevertheless, they had committed crimes. Yet we know that Jesus extended a welcome to those excluded men – a welcome that one of them reached out for, and received.

A voice for the voiceless

Let’s be blunt: Those who are on the sharp end of this new law are not society’s most visible, powerful people. And that is a very good reason for Christians to be mindful of them. Proverbs 31: 8 tells us: “Open your mouth for the mute.” In Deuteronomy 10:19 God commands his people to “love the sojourner, therefore, for you were sojourners in the land of Egypt.” The Bible is full of commands to care for those whose voice isn’t usually heard and whose home hasn’t always been here. God usually accompanies that command with a reminder that we, too, once were outsiders and that God rescued us from that state. Christians are those who, while once being enemies of God, have now been rescued according to his grace. Christians have an explicit duty to care for those whom others may seek to exclude.

Probably most of you reading this are not among the six million people who are now at risk of losing their citizenship. But we need to be aware of the issues that might otherwise fly under our radar. Maybe, after exploring this issue, you will decide that the government is right to give itself this power. But even if we think that this government wouldn’t abuse this new right and strip people of their Britishness at the stroke of a pen, it seems naïve to assume these powers will always be used correctly. What about some future government?

As Christians, we know that we have been afforded the greatest inclusion: to be grafted into God’s very own family. Our compassion for others, and our compulsion to speak up for those least valued by the world, should lead to us to be deeply concerned by this move. As the House of Lords now scrutinises this legislation, we might pray for compassion and wisdom for those in parliament. And, in this season where we celebrate the arrival of the ultimate outsider into this world, hope that this matter might yet be revisited.