Campaigners want to ban ‘non-affirming’ prayers for gay people. Here’s why that would be disastrous for Christian freedom

This would be the most religiously repressive law the UK has seen in centuries, says Simon Calvert, who is vowing to take the Government to court if they pass legislation which criminalises prayer 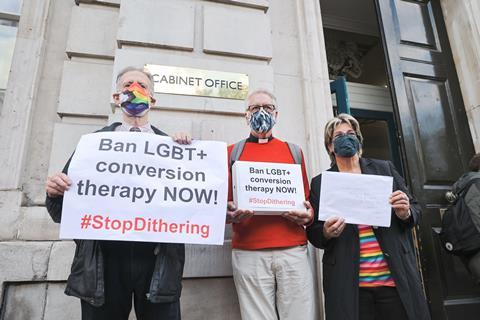 A few days ago I testified in front of MPs on Westminster’s Women and Equalities Committee. They’re examining Government plans to ban conversion therapy. If you’ve not looked into this issue, you’ll assume it’s just about tackling abuse. Christians are against abuse. So what’s the problem?

The problem is ‘abuse’ is being redefined to include basic Christian theology on sexual ethics and gender.

The leading activist on this, Jayne Ozanne (pictured, right), also appeared before the Equalities Committee. She told them to bring in a wide ban and that only prayer and pastoral support that is ready to affirm LGBT lifestyles should be legal.

Ozanne apparently wants Christians who encourage people to follow Christ’s teaching on sex to be prosecuted and convicted, then fined or jailed.

As I told MPs during my testimony, this would constitute the most religiously repressive law the UK has seen in centuries.

Activists want Christians who encourage people to follow Christ’s teaching on sex to be prosecuted and convicted, then fined or jailed.

But these activists don’t seem at all embarrassed about their totalitarian instincts. They say this kind of thing regularly. For example, Ozanne, a spokesperson for the Ban Conversion Therapy (BCT) campaign, told The Guardian: “I would strongly refute that ‘gentle non-coercive prayer’ should be allowed.”

The BCT website even targets teaching “that people must remain celibate, unless they really felt they were ready for heterosexual marriage”.

I hope you are shocked. Christians need to realise there is a concerted campaign to criminalise the sexual ethic of the New Testament. And the Government is responding to this campaign with the promise of legislation.

So far, they have resisted pressure to go as far as the Ban Conversion Therapy campaign wants. Proposals they put out for consultation last month promise to target genuine abuse while protecting the everyday work of churches, and the ability of parents to raise their children in the faith.

That’s good, as far as it goes. But there is a serious lack of clarity and detail in their plans. It is not at all clear exactly how they are going to keep their pledges to protect religious liberty. Meanwhile BCT and others claim the proposals don’t go far enough. They say they include ‘religious opt outs’.

But the freedom to share your faith and pray with your friends and family is not an ‘opt out’. It is a fundamental human right.

In May we asked our lawyers to write to the Government. We made clear we are prepared to take them to court if they get this law wrong. If it tramples on freedom to sensitively pray, preach, pastor and parent, we are ready to litigate. (We’ve got experience at this kind of thing. For example, in 2016 we persuaded the Supreme Court to strike down a Scottish law for breaching human rights.)

Our lawyers also sent the UK Government a 30-page legal opinion from a top QC showing how the kind of law BCT want would cut across ordinary, innocent church practices like evangelism, communion, baptism and membership. It would also criminalise parenting decisions over sexuality and trans issues.

Jason Coppel’s legal opinion reminded the Government that Christian beliefs on sex being reserved for man-woman marriage are protected by human rights and equality law and “worthy of respect in a democratic society”. This principle has been upheld in a number of key court cases The Christian Institute has fought, such as the Supreme Court win for Ashers Baking Co.

So if the Government were to give campaigners the oppressive law they want, it would put the UK in breach of its international human rights obligations.

But, as you’ve seen, that isn’t stopping the activists. And the lack of religious literacy within Government means even if they try to do the right thing they could still get the wording of the law wrong.

This is where you come in.

The consultation, which is open to people in all parts of the UK, closes on 10 December. It is vital Christians use the opportunity to make reasoned submissions to help Government ministers understand what is at stake, and what they have to do to protect legitimate religious freedoms.

Our Let Us Pray campaign website carries a short, simple guide to responding to the consultation. Will you click the link and respond today?

Premier Christianity is committed to publishing views from across the UK Church. For an alternative perspective on this story, see here.

The Government consultation is open until 10 December and can be accessed here.

Simon CalvertSimon Calvert is Deputy Director for Public Affairs at The Christian Institute, one of the largest UK organisations representing evangelicals with over 60,000 supporters. To find out more, visit www.christian.org.uk